Imagine, if you will, a sort of Yiddish ‘Brigadoon’ 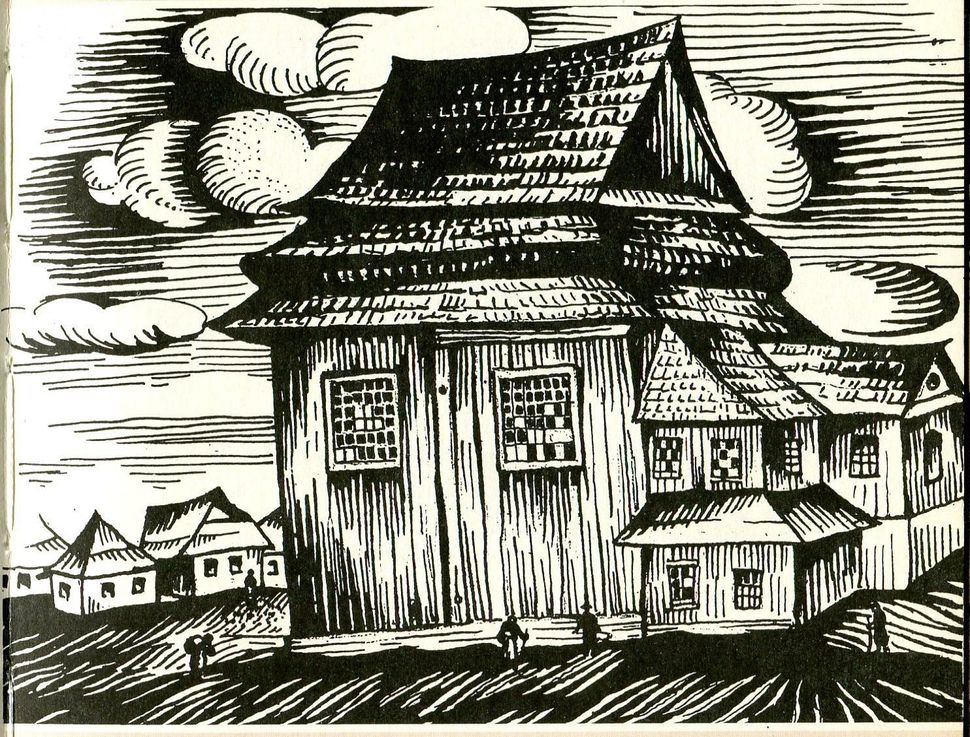 A synagogue in Biešankovickaja. Image by Center for Jewish Art

Imagine a village in Poland so isolated that it has escaped the horrors of 20th-century Jewish history. This is the challenging suspension-of-disbelief that Max Gross, a former Forward staff writer, requires of readers of “The Lost Shtetl.” Their reward is a wryly engaging picaresque novel that toggles between social satire and bittersweet romance.

The town of Kreskol – once named Kyrshkow – is surrounded by forests, economically self-sufficient, and cut off from the rest of modern-day Poland. All its inhabitants are Jews, ruled by the strictures of Orthodoxy and the rhythms of rural village life. Kreskol has no electricity or running water, no automobiles, televisions, computers or phones. It is powered by gossip and custom.

Bypassed by modernity, “a lonely beachhead of the past,” Kreskol also has eluded both the Holocaust and Soviet totalitarianism. No (paved) roads lead there. So the Nazis, for all their presumed efficiency, never showed up to march its inhabitants to their deaths. The Communists never nationalized the land, nor shipped dissidents to the Gulag. Kreskol’s populace resides in fairytale innocence, in a Yiddish version of Brigadoon.

But Kreskol’s isolation – like Brigadoon’s — is not absolute. Gypsies, themselves ravaged by history, make occasional trips to town to peddle their wares. And a lone Holocaust survivor, Leonid Spektor, also finds his way there, mesmerizing Kreskol’s children with “wild, frightening, dramatic stories,” disguised as fables, which reflect the suffering he endured.

A fragile and imperfect paradise, Kreskol is imperiled by reverberations from a single, disastrous arranged marriage. Putting aside her misgivings, Pesha Rosenthal agrees to wed Ishmael Lindauer. But the two turn out to be spectacularly mismatched. He is mostly silent, and her efforts to coax him into conversation are fruitless. Boredom turns into repulsion, his verbal rebuffs spawn her sexual ones, and their mutual antagonism culminates in violence.

Pesha finally coaxes the unwilling Ishmael to divorce. But when both ex-wife and ex-husband disappear, townspeople fear that Pesha has been murdered. And Yankel Lewinkopf, the orphan child of a dead mother and an unknown father – in other words, an expendable outcast — is dispatched to the wider world to find them.

Led by gypsies to the gentile town of Smolskie, Yankel is befuddled by its modest sights, including multistoried buildings and traffic lights. An accident lands him in a hospital, where his tales of Kreskol consign him to the psych ward. Doctors pull out all the stops to cure him of his supposed delusions. Only a hypnotherapist believes his story. Yankel, for his part, finds their account of the Holocaust impossible to credit. “I’m not dumb enough to fall for this nonsense,” he tells his doctors.

Finally, one clue – a scrap of paper with a gypsy’s phone number – convinces a physician that Kreskol is neither delusion nor hoax. And the barriers between Yankel’s reality and modern Poland begin to crumble. With Yankel in tow, bureaucrats and reporters descend on Kreskol via helicopter – an apparition that villagers confound with the appearance of the Messiah.

Poland’s official aim is to enlighten and educate Kreskol, as well as to assimilate and tax it. Complications naturally ensue. The populace learns about the Holocaust, one gory image at a time. After an initial tourist bonanza, the town is forced to exchange its antiquated currency, impoverishing the newly wealthy. A post office opens, and an electrical grid and roads are built. But the price of incorporation into Poland is high. Will it be paid? Should it? The controversy divides the town, while Poles once again start to wonder if Kreskol is nothing but a hoax.

Gross alternates between the town’s story and the ongoing adventures of Yankel, Pesha, and Ishmael. Having stumbled on Pesha (in a suitably improbable picaresque fashion) in a Warsaw brothel, Yankel, seduced by her beauty and their common past, falls in love. The feeling, it turns out, is mutual. They share, we’re told, “a pioneering willingness to fling themselves into the unknown.” But can this romance possibly end well?

Gross’s debut novel isn’t always convincing, even on its own terms. But it’s rarely less than entertaining. Gross moves smoothly backward and forward in time, but one technical problem he hasn’t entirely solved is the narration: The first-person narrator seems initially to be a citizen of Kreskol, steeped in the town’s history and with a stake in its fate. (We keep waiting for the reveal.) But, at other points, he or she seems to know too much, evolving into an omniscient narrator conversant with various characters’ innermost thoughts.

“The Lost Shtetl” is a fantasy, but also an indictment of human fallibility, modernity, and the troubled relationship between Jews and gentiles. However far-fetched the notion of a town insulated from history, Gross suggests that the 20th century’s genocidal spasms have been crazier still – that the unimaginable reality of the Holocaust is actually more fantastical than Kreskol’s imaginary innocence.

To join the Forward book club in reading “The Lost Shtetl,” email bookclub@forward.com. Our first meeting will be Nov. 4

Imagine, if you will, a sort of Yiddish ‘Brigadoon’