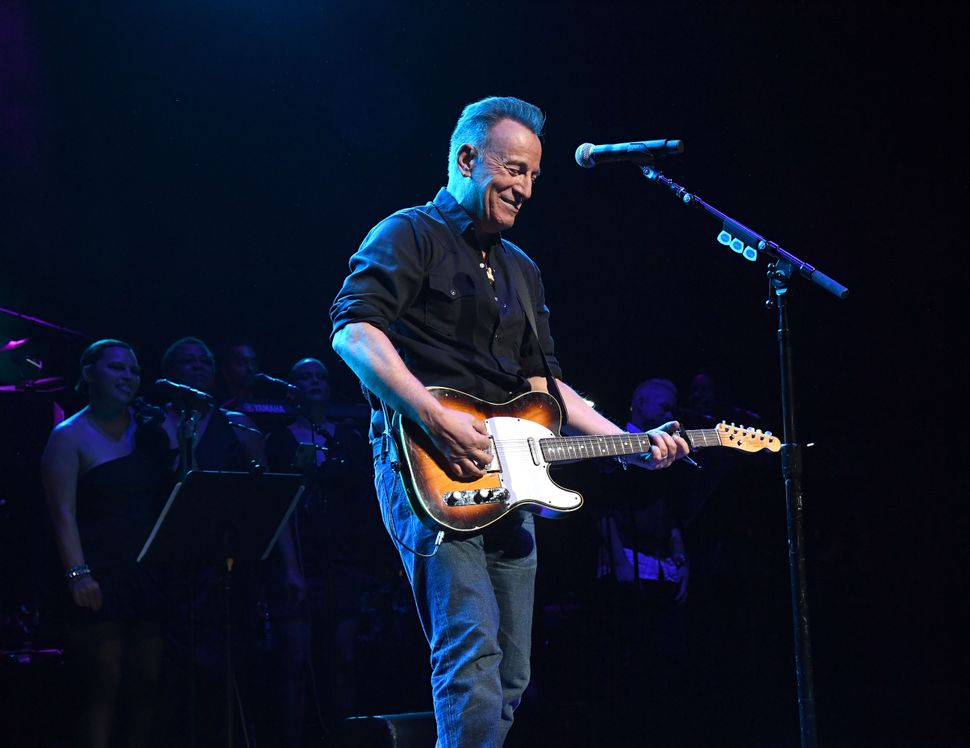 There is a point in “Letter to You,” the new film documenting the making of the new album by the same name, when Bruce Springsteen dons his prophetic cloak and declares:

I dwell in a house of a thousand dreams…. We’re not been made perfect by God, but here I try to speak in the voice of my better angels. We have been given the tools and the property of the soul to be attended to and accounted for and that takes work, work that we might build on the principles of love, liberty, fraternity – ancient ideas that still form the basis for a good life and a humane society. What happens in this house matters. So brothers and sisters, wherever you are, let’s light up this house.

The Boss and his tribe – the members of the E Street Band – then launch into a version of “House of a Thousand Guitars,” one of several numbers on the album, including “The Power of Prayer,” that speak directly to the power of music to heal, unify, and even to conjure spiritual transcendence.

The album and film were recorded in the fall of 2019 in a barn-like recording studio and clubhouse amidst the snow-covered grounds of Springsteen’s New Jersey retreat. The whole thing has the feeling of an 18th-century Hasidic rebbe and his followers on a retreat in the woods, composing and practicing nigunim, the vocal melodies that are tools used to achieve transcendence.

The role of rebbe suits Springsteen, who at 71-years-old and having played with a number of these musicians for nearly half a century commands a following of acolytes around the world who are eager to venture from their homes whenever he comes to their towns or close enough for them to make a pilgrimage to hear him lecture firsthand, a bit in words but mostly in the form of his joyful and triumphant rock anthems. They are often profiles of the lonely and forgotten, the lost and haunted, those who for one reason or other have had their dreams dashed and are living out lives of pain and hardship. In the presence of the rock ‘n’ roll rebbe, and with the aid of his inner circle of musicians, including Max Weinberg and Roy Bittan — who may just know a thing or two about the real rebbes of old — the Boss blesses his followers with a modicum of dignity and hope and, in spite of his never having worked a day in his life (his words, not mine), serves as a guide and a role model toward living a more meaningful life.

It’s not for nothing that keyboardist Bittan once called the E Street Band “the greatest bar mitzvah band of all time.”

Springsteen has come around to see himself overtly in this prophetic role. Speaking about the new album, he recently told an NPR interviewer:

On “Letter to You,” as always, the Roman Catholic references of his youth flow freely: characters include a priest, the Virgin Mary, the Holy Ghost, and Jesus himself. Madonna also makes an appearance, but not the fellow Catholic-and-Kabbalah-obsessed pop star (the song was written in 1971). This Madonna is more likely a reference to the one in Bob Dylan’s 1966 song, “Visions of Johanna,” which Springsteen named as one of his all-time favorite Dylan songs in a recent interview on The Late Show with Stephen Colbert.

But Springsteen has always been ecumenical in his theology, dating at least as far back as “Adam Raised a Cain,” found on the 1978 album, “Darkness on the Edge of Town.” Moses, one of his go-to prophets, shows up in “Song for Orphans,” and he invokes the figure of Yahweh in “Rainmaker,” a not-so-subtle screed against demagogues that can easily be read as a commentary on the current occupant of the Oval Office (although it was written before 2016). Springsteen has fully absorbed the cadence and rhetoric of the Hebrew Bible; in that same NPR interview, he notes, “It was very unusual — we recorded, really, the whole album in four days. And on the fifth day, we rested.”

Many of the songs on “Letter to You” – his 20th studio album — deal with mortality and death. Springsteen has lost a few beloved bandmates along the way – most notably saxophonist Clarence Clemons and keyboardist Danny Federici — and most recently, the frontman of the first real band he was in, the Castiles, from 1965 to 1968. When George Thiess died a few years ago, the Boss realized he was the Castiles’ last man standing, hence the song, “Last Man Standing.” The refrain relies on the popular image of “rock of ages” drawn from Isaiah 26:4, which in his midrash gets a rewriting as ““Rock of ages lift me somehow / Somewhere high and hard and loud.”

One final image in the song “House of a Thousand Guitars” also argues strongly for Springsteen’s prophetic mission whereby music brings about spiritual transcendence. He sings:

Here the bitter and the bored

Wake in search of the lost chord

Yeah in the house of a thousand guitars

One can’t but help hear in that “lost chord” the echo of that “secret chord that David played, and it pleased the Lord,” from Leonard Cohen’s “Hallelujah.” In the end, “Letter to You” works as an affirmation of tribal bonds as well as a memorial liturgy, his own Mourner’s Kaddish.

Seth Rogovoy is a contributing editor at The Forward. He first saw Springsteen perform at C.W. Post Auditorium in fall 1975. There have been many other concerts since.