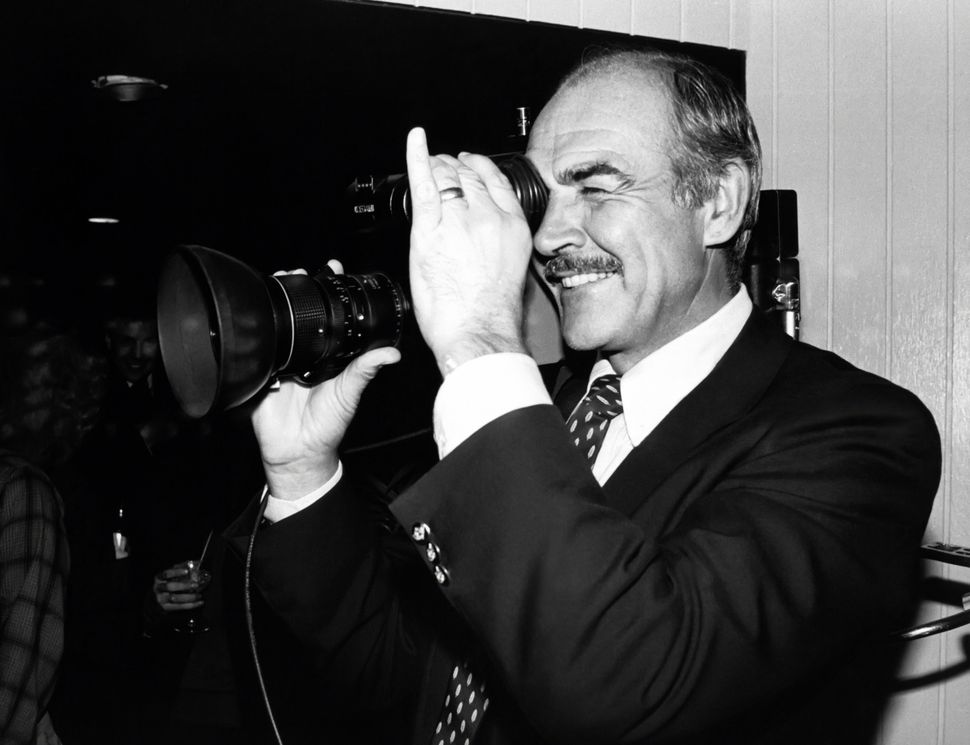 Sean Connery, the Scottish actor who died on October 31 at age 90, may have been unaware that his celebrated film role as James Bond could possibly have included lines about how he preferred Manischewitz kosher wine, instead of martinis, shaken and not stirred.

Rabbi Raphael Zarum of the London School of Jewish Studies has argued that the character of Bond might be based on a certain Sidney Reilly (c. 1873–1925), a Russian-born agent for Scotland Yard and the British Secret Service.

Reilly was known as the Ace of Spies, and his precise origins are still debated, but historians generally agree that he was Jewish, born either Zigmund Rozenblum in Odessa; Georgy or Salomon Rosenblum in the Russian Empire’s Kherson Governorate; or Sigmund Rosenblum in Bielsk Podlaski, present-day Poland.

The uncertainty surrounding Reilly/ Rozenblum/ Rosenblum indicates his skill as an agent. He was caught up in romantic adventures, but unlike Bond, never dated anyone named Pussy Galore or Kissy Suzuki. Instead, Reilly had a tryst in 1920s Berlin with Pepita Bobadilla, a blonde-haired dancer who claimed South American heritage despite being born in the UK as Nelly Burton.

Reilly eventually married Pepita/Nelly, but since he was already married to someone else at the time, the union was dissolved as bigamous. This was not the only time that Reilly committed bigamy. Like Bond, he was also fond of gambling, upscale living, and jaunts to Asia.

Seen by fellow spies as a reckless risk-taker, comparable to Bond’s own derring-do, Reilly was eventually executed, it is presumed, in Moscow by the Joint State Political Directorate, the secret police of the Soviet Union.

Fleming biographer Andrew Lycett argues that while Reilly’s exploits were widely known, Fleming acquired special insights into his career from a former colleague of Reilly’s, the diplomat Robin Bruce Lockhart.

Yet as Lockhart noted, when asked directly whether Reilly had inspired the character of Bond, Fleming demurred: “James Bond is just a piece of nonsense I dreamed up. He’s not a Sidney Reilly, you know.”

There have been other, less convincing, attempts to assimilate exploits of real-life Jewish spies to James Bond characters. Clare Mulley wrote a study of the anti-Nazi spy Christine Granville, born Krystyna Skarbek of Polish Jewish ancestry. It debunks the notion that Granville had a purported postwar love affair with Fleming, then an intelligence officer. Some other writers have guessed that Granville later influenced Fleming’s sultry characters Tatiana Romanova in “From Russia With Love” and Vesper Lynd in “Casino Royale,” but Mulley affirms that Fleming “never claimed to have met [Granville], even in passing.”

The quest to find Jewish sources for Bond characters may be frustrated by the fact that Fleming’s novels, for all their enduring popularity, were merely intended as flimsy entertainments, not to be taken too seriously, as the author himself insisted.

As another response to Bond, in 1968 the Canadian Jewish novelist Mordecai Richler, author of “The Apprenticeship of Duddy Kravitz” kvetched in “Commentary Magazine” that Fleming was vastly inferior to the spy novelists Eric Ambler and Graham Greene. Instead, Richler placed Fleming alongside the down-and-dirty sadistic thrillers of Mickey Spillane.

Richler added that as a writer of dialogue, Fleming “had a resoundingly tin ear,” citing a speech by one character, Sol “Horror” Horowitz, an American Jewish mobster, from “The Spy Who Loved Me”:

“The lady’s right. You didn’t ought to of spilled that java, Sluggsy. But ya see, lady, that’s why they call him Sluggsy, on account he’s smart with the hardware.”

So readers should not expect satisfying thematic resonances or ethnic identities from Fleming’s characters, since the writer’s control over dialogue and action was so uncertain, and his artistic ambitions so modest. In addition to “Horror” Horowitz, whose steel-capped teeth likely led to the film character Jaws in “The Spy Who Loved Me” and “Moonraker,” a German Jewish physician named Dr. Stengel also pops up in “Thunderball”:

“Dr. Stengel, the fashionable doctor of Nassau, was not only fashionable but a good doctor. He was one of the Jewish refugee doctors who, but for Hitler, would have been looking after some big hospital in a town the size of Düsseldorf. Instead, rich and grateful patients had built a modern clinic for him in Nassau where he treated the natives for shillings and the millionaires and their wives for ten guineas a visit.”

When not mentioning such Jewish exiles, Fleming preferred to retain a certain ambiguity about potential Jewish roots of villains. He described Le Chiffre in “Casino Royale” as having “small ears with large lobes (indicating some Jewish blood).”

This appears to echo bogus Nazi physiology, as expressed in such writings as “How to Tell a Jew,” a short story from a children’s book, “The Poisonous Toadstool” (“Der Giftpilz”; 1938) by Nazi propagandist Julius Streicher, in which a schoolteacher informs his pupils that the ears of Jews are “very large, and they look like the handles of a coffee cup.”

Fleming named his supervillain Auric Goldfinger to tease the Hungarian Jewish architect Ernő Goldfinger, who in the 1930s controversially demolished some picturesque cottages in Hampstead, London, to build an ultra-modernist home for himself.

But Auric Goldfinger was not overtly identified as Jewish. Fleming’s narrator asked: “What had he been born? Not a Jew,” although later admitting that “there might be Jewish blood in him.” Fleming belonged to a generation of English upper class men who found it possible to have friendships with some Jews while retaining a habitual level of classist anti-Semitism. So Fleming was chummy with Kenneth Snowman, of Polish Jewish origin, chairman of Wartski’s jewellers.

Snowman appears as himself in a 1963 James Bond story, “The Property of a Lady,” where he is described flatteringly:

“James Bond asked for Mr Kenneth Snowman. A good-looking, very well-dressed man of about forty rose from a group of men.”

The narrative proceeds to discuss Snowman’s authentic expertise in the subject of Fabergé eggs.

Since he could portray a Jewish character positively, Fleming was apparently no ideologue, and his memorable nogoodniks might best be taken as an expression of their times. The Scottish novelist William Boyd, who published a James Bond continuation novel, suggested as much when he told “The London Times” in 2013: “If you were of [Fleming’s] privileged upper class, born at the beginning of the 20th century, you were probably racist, sexist, right wing and anti-Semitic.”

As if in reparation, most recently the English Jewish crime writer Anthony Horowitz has been licensed by the Fleming estate to publish new Bond-themed novels.

So as we bid farewell to Sean Connery, for many the most admired screen actor who portrayed James Bond, today’s Jewish readers might be glad that Ian Fleming did not write more often about the Jews. Rather than striving to identify Yiddishkeit in Bond’s racist, violent and sadistic world view, we may hope to relegate him to the unhappy past.