As we mourn Alex Trebek, we honor the Jewish history of ‘Jeopardy’ 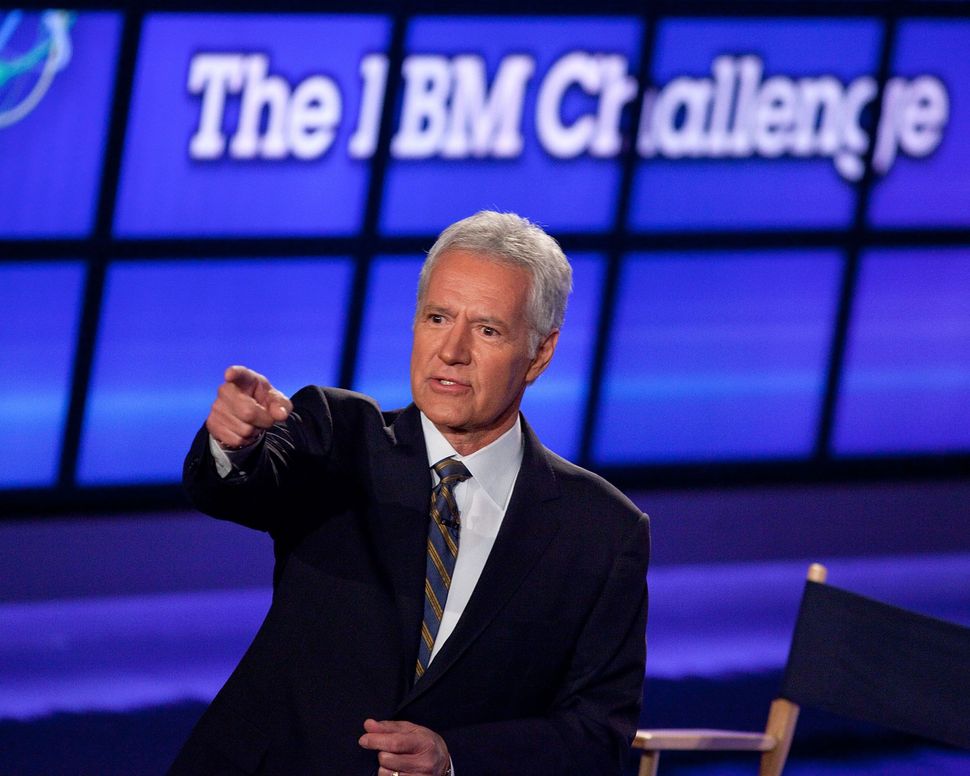 While we mourn longtime “Jeopardy!” host Alex Trebek, who died on Nov. 8 at age 80, we also pause to honor the game show’s admirably constant quotient of Yiddishkeit.

Since 1990, Billy Wisse has worked for “Jeopardy!” as writer and editorial producer, among other responsibilities. Son of Ruth R. Wisse and professor emerita of Yiddish Literature at Harvard, Wisse was hired by then-head writer Harry Eisenberg, the previous creator of answers to which contestants must reply with questions, in the show’s familiar format.

When viewers think of Yiddishkeit in “Jeopardy!,” it tends to be in terms of Jewish contestants who were gently and respectfully questioned about their backgrounds by Trebek.

The “Jeopardy!” aspirant Rabbi Joyce Newmark from Teaneck, New Jersey, explained that her usual response to questions about whether it was difficult to be a female rabbi was to say she didn’t know, as she has never been any other kind.

Trebek’s polite interest and gratification at responses went a long way to make Jewish participants and home viewers alike feel welcome. Yet he did not originate the welcoming aura for Jews at “Jeopardy!”

The show’s first star, Art Fleming, who emceed the program from the 1960s through the 1970s, would read from cue cards at holiday time: “I’d like to wish all people of the Jewish faith a most happy and joyous Hanukkah, which starts tomorrow.”

Such scripted interjections, preserved on NBC Master Books broadcast logs, are about all that remains of Fleming’s original stint, since NBC erased most of his episodes.

Fleming may not have helped his own posterity with the studio when he criticized the new format and claiming that by moving the show from New York to California, producers replaced smart and “authentic” contestants with show-biz types, while also dumbing down the queries.

While some Jewish contestants on “Jeopardy!,” like the Bronx-born TV game-show producer Jay Wolpert, did follow show business careers, others did not, like Mark Lowenthal, co-author of “Secrets of the Jeopardy! Champions” who went on to be a writer about intelligence and national security matters.

Whether “Jeopardy!” questions with Jewish content have become easier over the years is debatable. Recent puzzlers listed on an online database range from fairly elementary to challenging.

Last month, the following bit of senatorial lore was presented under the category THEIR BAR OR BAT MITZVAH:

Relatively more demanding questions were related to Jewish literature, as in September, when under the heading PLAYS, the answer appeared:

Even more incisive conundrums, also in September, were seen under the category THE NATIONAL JEWISH BOOK AWARD FOR FICTION, including:

2017 winner David Grossman’s “A Horse Walks Into a Bar” follows one of these funny folks losing it onstage.

An immigrant is the hero of the title tale of a Mark Helprin collection, this “Island” in New York Bay.

1995 winner “Mazel” takes its title from the word for luck in this language written in Hebrew letters.

Sometimes the references to books are downright obscure, as in July 2019, when contestants were given a query related to former British Prime Minister Benjamin Disraeli under the title BRITISH LITERATURE:

Set in the 12th c. Middle East, “The Wondrous Tale of Alroy” is a novel about a Jewish conqueror by this author/politician

Similarly, decades ago, “Jeopardy!” questions on Yiddishkeit could vary widely in difficulty. So, in February 1987, under RELIGION, the self-evident answer appeared:

Blown in Jewish rituals, the shofar is traditionally a horn of this animal

Sometimes, earlier “Jeopardy!” questions involving Yiddishkeit could be misleading, like this one from May 1987, which confuses the blood type AB with the Hebrew month of Av:

Spelled out, it’s a blood type; pronounced, it’s a month of the Jewish calendar

Others were more obscure, like this factoid aired in April 1987 under the heading HOLIDAYS:

As it happens, Hanukkah is not mentioned in the Torah, since the events it celebrates happened after its text was written. Whereas Hanukkah is alluded to briefly in the Gospel of John 10:22 of the Christian Bible. Go know.

Some of the more recent non-Jewish “Jeopardy!” champions have met their Waterloo with the subject of Judaica. Brad Rutter, second-highest earning contestant on the show, bombed out of “1 vs. 100,” a short-lived NBC quiz program, because he flubbed a question about the Jewish reggae singer Matisyahu.

Yet such missteps are rare. Reciprocally responding to the respectful presentation of Judaism on the show, Jewish educators have frequently adopted the “Jeopardy!” format to teach pupils of all ages. The multimedia Jewish Children’s Museum on Eastern Parkway in Brooklyn designed by Gwathmey Siegel Architects includes a game show studio where visitors can demonstrate their knowledge of Jewish lore in a “Jeopardy!” format.

“Studying the Pauline epistles has been compared to the popular television game show ‘Jeopardy!.’ To play this game, contestants are given an answer to a hidden question… By way of comparison, studying Paul’s correspondence is like reading answers without the questions. The student of Paul’s writings is forced to guess what the original questions surrounding his correspondence really were.”

In a 2016 blog, Rabbi Geoffrey Mitelman recounts how he aced his audition for the show with an anecdote about how he had marched in a Memorial Day parade in Chappaqua, New York, alongside Bill Clinton.

So determined was Rabbi Mitelman to find Yiddishkeit in his “Jeopardy!” experience that he even elevated the rote memorization involved as part of preparation with a quote from Rabbi Arnold Jacob Wolf:

“Uniquely Jewish is the idea of memory as will. Memory is not seen as something that befalls a passive consciousness. It is something purposefully appropriated in awe and love.”

The Jews who most inspire contestants on “Jeopardy!” may not always be the ones seen by the public. The phantoms of departed family members have presided over the success of some Jewish “Jeopardy!” champions, like Matt Jackson who mentioned his grandfather Dr. Barnett Berman, a trustee of the Baltimore Hebrew College, as an omnivorous reader who influenced him: “I remember at a Passover seder [my grandfather] tried to figure out who wrote the Torah and went on a long digression. He had a big collection of books.”

Leslye Laderman, a contestant from last year, noted that while cleaning out her mother’s house some time ago, she happened upon a 1970s contestant application for “Jeopardy!” that was never filled out. Laderman suggested that this application represented a kind of bashert, or destiny.

Although the much-admired Alex Trebek has departed, it looks as if in their imaginations at least, some Jewish contestants will continue to find a soulmate in the “Jeopardy!” program.

As we mourn Alex Trebek, we honor the Jewish history of ‘Jeopardy’