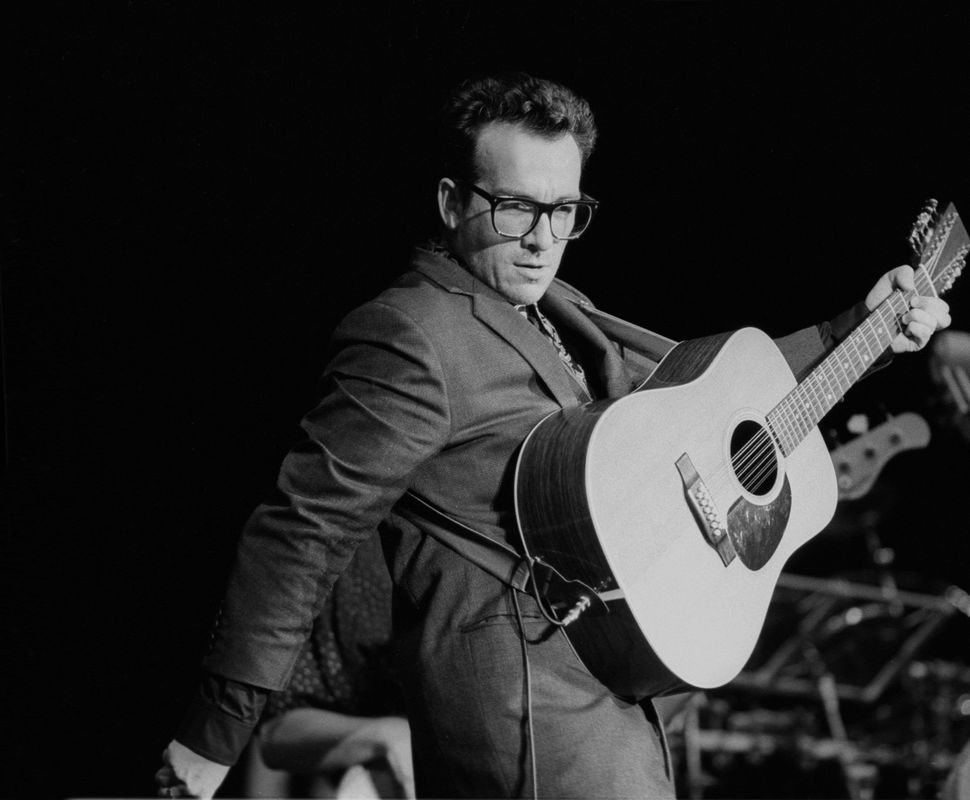 The first words Elvis Costello sings on his new album, “Hey Clockface” (Concord Records), are “I got no religion, I got no philosophy.” While the 66-year-old self-described “lapsed Catholic” might not adhere to any doctrine or creed, he has — like his father before him — enjoyed a storied career collaborating with Jewish artists. And he’s even mulled over the possibility that he may have Jewish ancestry on his father’s side.

Costello’s father, Ross McManus, was a longtime lead vocalist for the Joe Loss Orchestra, one of the most popular dance bands in the UK throughout the 1950s and 1960s. They were England’s answer to the Glenn Miller Orchestra — indeed, they adopted Miller’s “In the Mood” as their signature tune. Joshua Alexander “Joe” Loss was born to Russian-Jewish immigrants in Israel and Ada Loss and grew up in in the heavily Jewish district of Spitalfields in London’s East End. In Costello’s 2015 memoir, “Unfaithful Music & Disappearing Ink,” he writes that Loss “seemed to regard my father almost like another son, constantly questioning him about his family origins as if unwilling to accept that they were Irish and not Jewish.”

In an interview with “Freakonomics Radio: in fall 2018, Costello further speculated on his father’s ancestry, describing Loss as “absolutely convinced” that his father was Jewish. “I actually don’t know because — I think it’s a bit unlikely, but of course — because of the background of the family,” said Costello. “Who knows? I mean, we can’t get back very far with records with Irish people. My great-grandfather was what would be called now an economic migrant. He left in the generation after the famine, and unlike a lot of people, he didn’t go to America; he just went to Merseyside. And so I have no idea.”

As a vocalist, McManus was very adept at singing phonetically, which meant his repertoire could include Italian, French and even Yiddish. McManus recorded a cover of Frankie Valli’s 1967 US top-five hit “Can’t Take My Eyes Off You”; the B-side was his version of “If I Were a Rich Man” from “Fiddler on the Roof.” Before Costello was born, his parents briefly relocated to Chapeltown in Leeds, where the city’s long-established Jewish community lived alongside people newly arrived from the West Indies. Costello writes, “My Ma said that even during those austere years you could always get decent food, so long as you liked smoked fish or salt fish.”

Costello grew up in and around London and in Liverpool as a teenager. As a child, he often accompanied his father to concerts at the Hammersmith Palais, where the Joe Loss Orchestra reigned as the house band, and where the young Declan McManus would grow up to headline as Elvis Costello just a couple of decades later. His father unintentionally paved the way for Costello’s eventual career mostly by example, but also on a more practical basis. Declan first met famed music publisher Dick James — the son of a kosher butcher, born Leon Isaac Vapnick in the East End to Polish- Jewish immigrants — on visits to James’s office with his father, who was always looking for a new hit record to sing. James would eventually gain fame (and tremendous wealth) as the publisher of songs written by a four-piece rock combo from Liverpool.

Like every child of his age, Costello was smitten by the Beatles. As a dancehall singer, Ross McManus received a steady stream of publishing acetates of new songs from publishers hoping that he would sing their songs. This meant that the McManus household had early versions of Beatles’ tunes; his father even brought home autographs from Lennon, McCartney, Harrison, and Starr after sharing a bill with the Fab Four.

As a performing and recording artist for the past 45 years or so, Costello is known for his broad command of styles. While he first came to renown as a post-Beatles New Wave-era pop-rock singer-songwriter, he has variously worked on projects in genres ranging from country to jazz to pre-rock pop to chamber and orchestral music. While writing songs for what many consider to be his greatest album, 1982’s “Imperial Bedroom,” Costello reached out to Sammy Cahn — the Jewish-American composer/lyricist who wrote dozen of hits for Frank Sinatra and Broadway musicals, as well as “Let It Snow! Let It Snow! Let It Snow!” and “Bei mir bist du schoen” — to pen lyrics to a melody he had written that would eventually become the song “Long Honeymoon.” Costello writes, “He seemed like a link to an almost vanished age of songwriting and someone who would at least take my call. I couldn’t get Irving Berlin’s home number.” In the end, nothing came of it other than Costello’s own brilliant song.

Shortly thereafter, Costello met Michael Feinstein, who at the time was working as an assistant to Ira Gershwin. Costello didn’t even know Ira Gershwin — one of his all-time favorite lyricists — was still alive. Thus he was bowled over when Feinstein told him that Gershwin had Feinstein get him a copy of “Imperial Bedroom” after reading The New York Times review of “Imperial Bedroom,” which compared him to Cole Porter, Irving Berlin and the Gershwins.

Costello’s other great influences as a songwriter include Bob Dylan, Carole King and Burt Bacharach, all three of whom he would go on to work with. He has recorded several albums of co-writes with Bacharach — who grew up in Kew Gardens, the son of Irma M. (née Freeman) and Mark Bertram “Bert” Bacharach — one of which garnered the duo a Grammy Award. He has often toured with Bob Dylan, and has written songs with King. In 2002, he teamed with R&B songwriter/producer Jerry Ragovoy — the Philadelphia-born son of Russian-Jewish immigrants and this writer’s cousin — to write a ballad for soul singer Howard Tate, who had been working with Ragovoy since the 1960s. In his memoir, Costello also admits that the inspiration for the opening words of his early song, “Goon Squad,” was the 1963 hit “Hello Muddah, Hello Fadduh (A Letter from Camp),” by novelty songwriter and parodist Allan Sherman.

More recently, Costello has been working with Jewish-American librettist Sarah Ruhl on a musical adaptation of Elia Kazan’s film, “A Face in the Crowd,” which itself was based on “Your Arkansas Traveler,” a short story by Budd Schulberg, whose mother, Adeline Jaffe Schulberg, was born in Russia and who grew up on New York’s Lower East Side.

Early in his career, Costello cheekily said that his songs are exclusively motivated by “revenge and guilt.” Costello is known in some circles for his support of the Boycott, Divestment and Sanctions (BDS) movement’s cultural boycott of Israel. Perhaps the origins of Costello’s anti-Israeli feelings date back to a failed romance he writes about with a Jewish doctor’s daughter named Joanna, who “eventually left me for a soldier living on a kibbutz.”