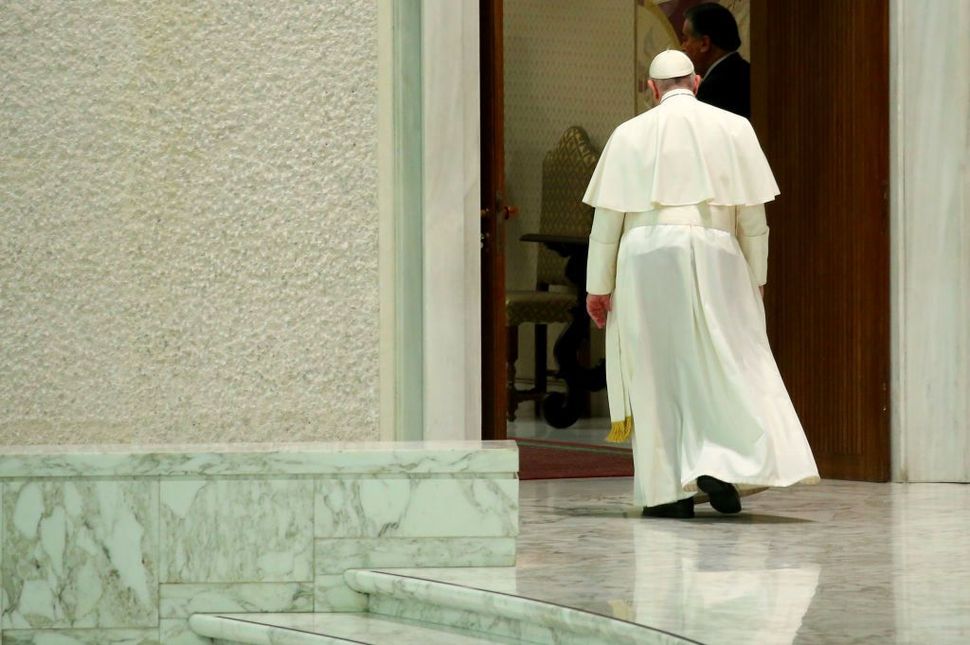 Evgeny Afineevsky celebrated his 48th birthday with a very special person: Pope Francis, the most significant figure in the Catholic world.

Afineevsky had just finished filming “Francesco,” a documentary on the pontiff’s teachings. Ahead of its premiere at the Rome Film Festival, Afineevsky brought some friends to a private meeting with the pope, who greeted them with a cake.

“He wasn’t trying to create a show, like ‘Hi, you guys are meeting the pope,’” Afineevsky said. “Like, every one of my friends saw him as the same human being as each of us. That’s what’s striking about him.”

Born to a Jewish family in the former Soviet Union, Afineevsky immigrated to Israel as a teenager and the United States as an adult. His previous documentaries have tackled major geopolitical conflicts: “Winter on Fire” (2015), which earned him an Oscar nod, chronicled Euromaidan, a wave of anti-Russian protests in Ukraine. “Cries From Syria” (2017) covered the Syrian Civil War.

With “Francesco,” he turns to a figure who has used his position to bring attention to such crises, and in doing so has become an icon far beyond the Catholic world. Drawing on interviews with Pope Francis himself and archival footage provided by the Vatican, Afineevsky shows the pope speaking out on climate change in his now-famous encyclical “Laudato Si;’” washing the feet of migrants in Lampedusa, Italy; and becoming an advocate for victims of sexual abuse within the church.

But what gained most attention was a 30-second clip in which the pope condemned homophobia in the Catholic church, which defines marriage as a bond between one man and one woman, and expressed support for same-sex civil unions.

“Homosexuals have a right to be part of the family,” he said. “They’re children of God and have a right to a family. Nobody should be thrown out, or made miserable because of it.”

For LGBTQ Catholics alienated by the church’s policies, it was a long-awaited demonstration of acceptance. But some conservative Catholics accused the pope of contradicting long-established doctrine. Vatican officials tried to walk back the comments, saying they were edited excerpts of a 2019 interview with Mexican journalist Valentina Alazraki. (Afineevsky told the Forward that the segment in question included clips from interviews conducted by him and other journalists, and that the pope reiterated his 2019 statements during the filming of “Francesco.”)

Reached by phone in Los Angeles, where he lives, Afineevsky chatted with the Forward’s Irene Katz Connelly about his first Super 8 camera, covering the Catholic world as a practicing Jew, and his face-to-face meetings with the pope. The following interview has been edited and condensed for clarity.

Irene Katz Connelly: You won your first award for documentary filmmaking as a teenager in the former Soviet Union. Tell me about your first forays into the medium.

Evgeny Afineevsky: Since childhood I was active in the arts: first on the stage and later transitioning into cinema. What was interesting for me is that theater is always like a moment in front of our eyes. The audience is emotionally engaged with the actors, but when they leave the theater, the moment lives in the memory, slowly disappearing. Cinema is a sculpture that you’re creating for the centuries.

The first film I made was a documentary. I was part of a youth club with other filmmakers, and we did our own films with primitive technology and Super 8 and 16 millimeter cameras. My film was about young kids creating little model planes and flying them. I created it when I was 16, and I participated in a film festival on the Black Sea hosted by the Pioneer Camp, which is like the Boy Scouts of Russia. 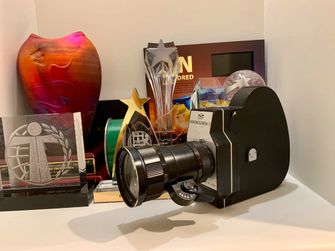 Afineevsky’s first camera, which he displays in his home in Los Angeles. Image by Evgeny Afineevsky

When did you become interested in profiling the Pope?

When I went to Syria [to film “Cries from Syria”], I saw what Pope Francis did. He went to Lampedusa to bring attention to the crisis by bringing the media there. He went to Lesbos. He went to the Rohingya refugees to tell their story. He’s not only the leader of the Catholic church; he’s a role model, a person who is pro-life on a global scale.

You’ve said it took a long time to “open doors” at the Vatican and get access to Pope Francis. What was that like?

From the beginning, I was given a green light by the Vatican. But I was not promised any interview with the pope. Like any story I’ve worked on, I realized I needed to find my way to the character. When I went to Argentina in March 2018, I met all his associates, all his friends from the past. I even met the daughter of the girlfriend he had before he got a call to become a priest. Then I did the same thing at the Vatican.

How much time did you actually spend with the pope?

Our meetings were very short, from a couple minutes to an hour. But I met him many times, and each time was a learning process. It’s really interesting to pick up his ideas, but he’s also a great listener. He listens to you, he learns from you.

Is it intimidating to have him listening to you?

Absolutely not, that’s the interesting thing. I never felt intimidated by him, I felt comfortable. And that’s because he makes you feel comfortable. He doesn’t want you to feel the difference between him and you. He wants you to feel equal.

Pope Francis’s support for same-sex civil unions garnered international praise and backlash. Did you anticipate this kind of attention?

I never thought about it. For me, these 20 or 30 seconds of footage were not breaking news. Pope Francis has actually expressed this numerous times in the past, before he said it to me. And what he said does not suggest any changes in church doctrine. What the pope was trying to state is that every country should create a civil union law. It’s very simple.

In the conversation we had he said, “I’m not embracing this, but I need to protect them so no one will be discriminated against or thrown out of the family. I am not allowed to judge anyone. Who am I to judge?” He repeated this to me many times: “Who am I to judge these people?”

What was the ensuing storm like for you, as the film’s director?

From one side, every filmmaker is happy when his film is getting attention. But it was interesting for me to see how people weren’t able to look at the wider issues that are in the movie, from climate change to migration to the pandemic. Pope Francis said it really specifically; it is a moment where we need to reevaluate how we’re living today and what we’re taking with us into the future.

It’s interesting to see a Jew representing the most significant Catholic figure in the world. Did you talk to the pope about that at all?

One of the shots I love is where you can see the pope, when he was Cardinal Bergoglio, lighting candles for Hanukkah in Buenos Aires. He was wearing a kippah and praying like everyone else in the synagogue.

This relationship he’s maintained with the Jewish people is so fascinating. For example, when I was observing Yom Kippur, we were exchanging letters. He was writing to me wishing me an easy fast, and asking me forgiveness. And I was asking him forgiveness. It’s beautiful to see how much he respects you and also respects your beliefs.

What does Pope Francis think about the film?

He didn’t see the whole thing, because he doesn’t watch TV. But I showed him some clips, some different parts of the movie. He laughed, smiled, he reacted.