A pioneering artist, Nelly Kaplan used Jewishness as her form of rebellion 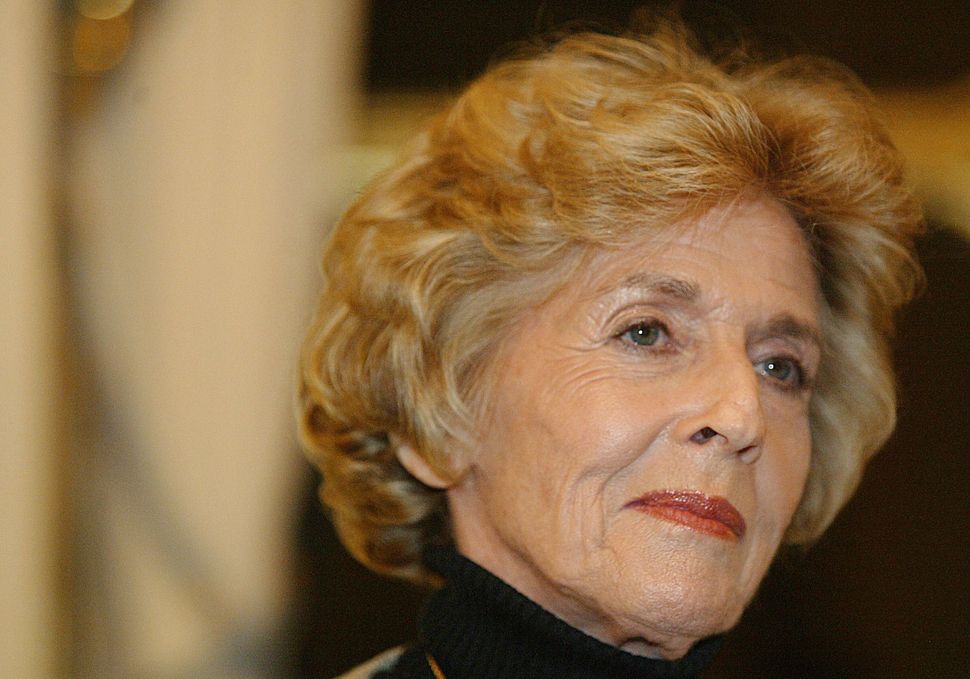 The French Jewish filmmaker and author Nelly Kaplan, who died on Nov. 12 of COVID-19 complications at age 89, expressed creativity with Yiddishkeit as a form of rebellion.

She was born into a prosperous family who had moved to Argentina from Kiev and Odessa to flee Russian anti-Semitism. They had relocated to colonies founded by Maurice de Hirsch’s Jewish Colonization Association as part of a resettlement plan.

As a young girl, Kaplan struggled against the domestic inaction of a household dominated by her father, a successful pharmacist and laboratory owner fond of uttering the consoling Latin tag from Theocritus and Cicero, “Dum Spiro Spero” (While I breathe, I hope.)

Kaplan found her own form of hope by immersing herself in movies and surrealism, and as soon as possible she escaped to Paris, where she sought a livelier artistic milieu.

She found it at the Paris Cinémathèque, meeting such eminences as Marie Epstein, sister and collaborator of the pioneering French Jewish filmmaker Jean Epstein.

Codirecting her own films with Jean Benoît-Lévy, Marie Epstein also served as a film preservationist at the Cinémathèque, where Lotte Eisner the German Jewish archivist, also reigned as co-founder. Both Epstein and Eisner encouraged Kaplan.

At a Cinémathèque event, Kaplan also became acquainted with the legendary director Abel Gance Gance’s father may have been Jewish, and French Fascists and Nazi occupants before and during World War II were convinced that Gance was, too.

When war broke out in 1939, Gance had to abandon a planned film about Christopher Columbus based on the premise that the explorer was Jewish.

In 1941, the French Nazi collaborator and film critic Lucien Rebatet proclaimed that nothing “exudes a more potent Jewish stench than the conceited, primitive messianism” of a book of essays by Gance. Rebatet scornfully dismissed Gance as a “[Victor] Hugo of the synagogue,” implying that like Hugo, Gance over-emotionally defended downtrodden people, but in a specifically Jewish way.

Banned from the film world during the German Occupation, Gance made up for lost time by embracing massive projects in the postwar years. He also embraced Kaplan, who became his lover as well as assistant director for a decade.

Their affair continued despite the objections of Mrs. Gance, who arrived on set one day and physically attacked Kaplan, screaming the French insult, “Dirty Jewess” (Sale Juive), as Kaplan later recalled.

Kaplan eventually saw a certain humor in the situation, as she wrily signed a missive to Gance in 1962, “Nelly. Profession: Wandering Jewess.” Nevertheless, it was a relief to move on to her own projects, including “A Very Curious Girl” (“La Fiancée du pirate”; 1969) about a village prostitute’s revenge.

The narrative is accompanied by a song written by Georges Moustaki, the French singer of Italo-Greek Jewish origin. It was sung on the soundtrack by Barbara, the French Jewish singer born Monique Andrée Serf.

The song itself, “I Don’t Give a Damn,” (“Moi je m’balance”), while expressing the protagonist’s predicament, also represents Kaplan’s lifelong footloose attitude: “I don’t give a damn/ without farewell or thanks / I will leave you here…”

Kaplan’s innate rebelliousness was strengthened by ties formed with eminent surrealists. Soon after arriving in Paris, she encountered one of that literary movement’s founding fathers, Philippe Soupault, at a gallery exhibition of art by Marc Chagall.

She had read a key text co-wrote by Soupault, “Magnetic Fields,” as well as Lautréamont a poet cherished by the Surrealists, both in Spanish translation. So when Soupault approached her and asked, “Who are you, exorbitant flower amidst all these cretins?,” she had an informed reply ready.

A fierce opponent of Nazism starting in the 1930s, Soupault had been imprisoned and tortured by German forces in France, and was uninclined to excuse French collaborators in the arts after the war was over.

Kaplan befriended other such courageous Parisians, including the director Marceline Loridan-Ivens (born Rozenberg to a Polish Jewish family), an Auschwitz survivor.

Ever-intrigued by the transgressive and with an exuberant interest in human sexuality, Kaplan wrote a play that premiered in 1980, “The Faces of Lilith,” about the Jewish mythological demon of the night whose wantonness is one of her leading traits.

Always independent minded, Kaplan was an attentive reader of the Forward and was never shy about sharing her views.

Kaplan approved when a Forward feature from October 2010 asked why Hollywood’s Academy of Motion Picture Arts and Sciences was presenting the French-Swiss director Jean-Luc Godard with an honorary Oscar, despite his record of antisemitic statements.

In an email to me dated Oct. 9, 2010, she observed: “It’s very good to finally write what everyone knew but didn’t dare say, since attacking an ‘icon’ just isn’t done.”

Kaplan followed this up on the same day with another message, adding her opinion of Godard as an artist: “I always considered him as an incorrect value (fausse valeur), king of smoke and mirrors! (roi de la poudre aux yeux!) Warm regards, Nelly”

The heat of Kaplan’s enthusiasms was never in doubt, even if on occasion, their intensity could be a trifle intimidating, combined with her anarchic taste for dismantling conventions.

One of her short story collections includes a punningly titled tale, “Hail, Husbands,” (“Je vous salue, maris”) a takeoff on the homonymous French phrase for Hail, Mary, or the traditional Christian prayer of praise for the Virgin Mary.

Kaplan’s scoffing stance about organized religion led at least one critic to liken her to the self-conscious blasphemies of another cinema and theater surrealist, Roland Topor, a French Jewish artist and writer of Polish origin.

In “Je vous salue, maris,” Kaplan’s narrator asserts: “Men never invent anything … never create anything striking [and] women are always right.” In the story, the sole remaining hope for humanity is if a race of androgynous people one day were to take over for the flawed men and women who populate the planet.

Convinced that she was a sort of witch, Kaplan looked for kindred spirits among aspiring women filmmakers, with the object of conquering the industry’s ambient misogyny. She summoned female poets to ride on broomsticks in a sorceress-like mode to create “androgynous” films that might be bitter or sweet, but would certainly be violent.

This good-humored ferocity could make Kaplan unpopular in less vehement company. Her unfashionable reservations about feminism were usually based on the fact that she admired people on an individual basis, without reference to gender.

No ideologue, she would mockingly demur if viewers identified lofty concepts in her works, citing the familiar saying falsely attributed to the American Jewish movie mogul Sam Goldwyn: “If you want to send a message, call Western Union.”

The artistic messages of Nelly Kaplan may still hold revelations for Jewish readers and audiences today. A first step might be to translate into English more of her prolific writings, since her passion for literature was a constant in the artistic inspiration of this singularly exorbitant Jewish flower.

A pioneering artist, Nelly Kaplan used Jewishness as her form of rebellion