Against all odds, Holocaust survivors retain their optimism — and their music 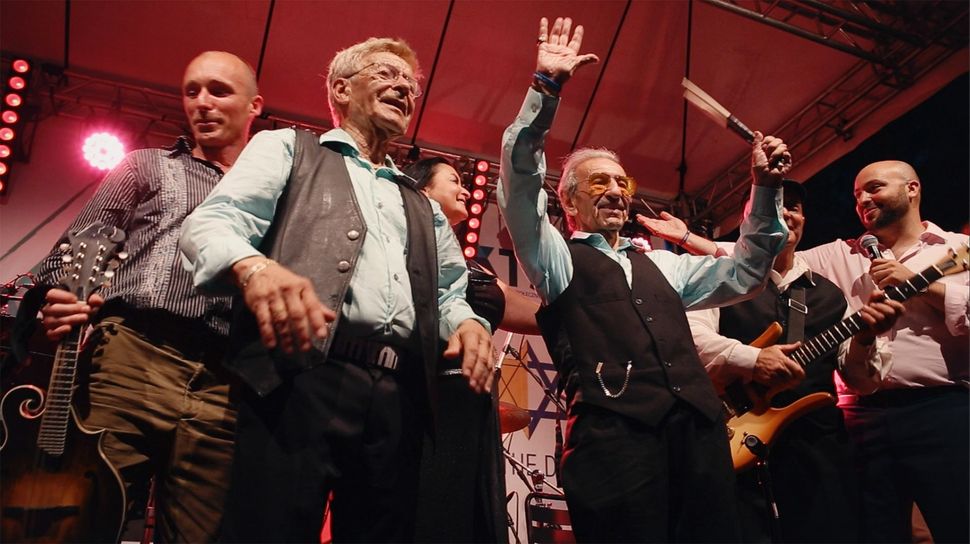 Directed by Tod Lending, “Saul & Ruby’s Holocaust Survivor Band” recounts the experiences of two Holocaust survivors, Saul Dreier, 91 and Ruby Sosnowicz, 87, who’ve joined forces to form a Klezmer Band that celebrates their survival — or, more to the point, how they’ve thrived despite enduring Holocaust atrocities. A testimony to optimism and resilience, the band also gives the two retirees now based in South Florida something to do. Documenting the men’s experiences as caregivers attending to seriously ailing wives, and ultimately as widowers dependent upon each other for companionship, the film is as much about the challenges of aging as it is anything else.

We follow Saul and Ruby’s journey from rehearsals to performances in small residential facilities to the Kennedy Center’s Millennium Stage. The band also travels to Warsaw and Krakow, Ruby and Saul’s native homes, respectively and finally to Auschwitz, where they plan to pay tribute to the 6 million who died including members of their own immediate families. For the two men, the trip arouses an array of memories, at times nostalgic, mostly devastating even as they triumph before large, enthusiastic audiences. Archival footage, home movies and personal photos are interwoven throughout.

Though not as poetic or visually compelling, the film brings to mind Andrew Jacobs’ “Four Seasons Lodge,” which also focuses on the intense bond between Auschwitz survivors who, contrary to expectations, have enjoyed lives well lived. In Jacobs’ film, each summer the octogenarians and nonagenarians, many of whom have lost spouses and are on the cusp of death themselves, gather at a Catskill bungalow colony, known as the “Four Seasons Lodge” to eat Jewish food, sing, dance, watch corny, at moments off-color, cabaret shows and, most important, reconnect with each other. Like “Four Seasons Lodge,” “Saul & Ruby” is a sad yet moving affirmation of life. But unlike the earlier picture, some discombobulating moments and unanswered questions remain.

Drummer Saul is the more expressive of the two men. He speaks emphatically, his commentary accompanied by a flurry of hand gestures. He is demonstrably emotional, clearly broken up at his wife’s funeral; by contrast, Ruby, the accordion and keyboard player is a man of few words. As his wife’s coffin is lowered into the ground, he remains expressionless. Their differing personas are evident onstage too. Saul, a bit of a ham, is comfortable in public, increasingly confident with each performance, strutting onto the stage, waving to his fans. Ruby has to be gently nudged onto the platform and told where to stand. A third character, although she appears mostly in the background, is Ruby’s grown daughter Chana, a dentist, who boasts an especially close bond with her father. She plays the tambourines and joins the band. Other younger musicians are also on hand, rehearsing and performing.

Both Ruby and Saul represent the primal 20th century journey at its worst. Both lost their families to the Holocaust. Ruby lived in hiding and wound up in a German displacement camp before serving in the Israeli army. Saul’s trip included stops at the Plaszow labor camp, Mauthausen concentration camp, a concentration camp in Linz, Austria and an Italian displacement camp. He arrived in the States in 1949.

Still, what happened afterward remains sketchy. It might have been interesting to know, for example, what he did for a living (the production notes indicate that he was a contractor) and something about his relationship with his grown sons. Ruby’s biography is more clearly drawn. We learn that he was an accordion teacher and we see him working as a hairdresser. He may have been haunted by his Holocaust years, but Chana says that she grew up in a happy, loving, musical home devoid of dark shadows.

There are some lovely snippets throughout. In one scene which takes place on the sidewalk outside the White House, Saul and Ruby, hands aloft, conduct several African-American street musicians playing Fats Waller’s “Don’t Get Around Much Anymore” on saxophones. And then there’s an amusing interchange between Saul and Ruby lying in their hotel beds watching a football game on TV. Saul is clearly the aficionado, while Ruby only tolerates the game, commenting, “It’s so stupid, everybody running for one ball.”

When they arrive in Warsaw, the story takes a darker turn as Ruby tries unsuccessfully to track down the apartment building where he once lived. The old streets have long since been destroyed; new houses have been built in their place. In Krakow, Saul succeeds in ferreting out his old homestead, eyeing the window of his childhood room. He enters the building then retreats, awash in the nightmarish memories that have surfaced. He recalls Germans penetrating the city, rounding up the Jews and dragging his grandmother from her home, shooting and killing in the middle of the street. When Chana tries to draw out more information from him, her rapid fire questioning is intrusive and jarring.

The reception the band receives in Poland where they perform for large audiences is impressive, yet here too something feels amiss. One can’t help but wonder about those in attendance — what are their family histories, and how do they reconcile their county’s past with its present? How do they really view the performance or account for Saul’s proclamation that the band’s mission is to spread the joys of love and global peace. In light of their own lives, it’s equally hard to fully grasp Saul and Ruby’s humanity-embracing stance and the film veers seriously off-course with a tacked-on note of warning, urging moviegoers to be aware of the rising tide of neo-Nazis across the globe.

Still, one of the final scenes set on the train tracks to Auschwitz is memorable. Here, the two survivors play their instruments outside the camp’s gates. It’s a jaunty tune, almost evoking a giggle at the intersection of shock and horror.

Against all odds, Holocaust survivors retain their optimism — and their music