‘The Undoing’ undid the Jewishness of the book that inspired it. Here’s why the author doesn’t mind 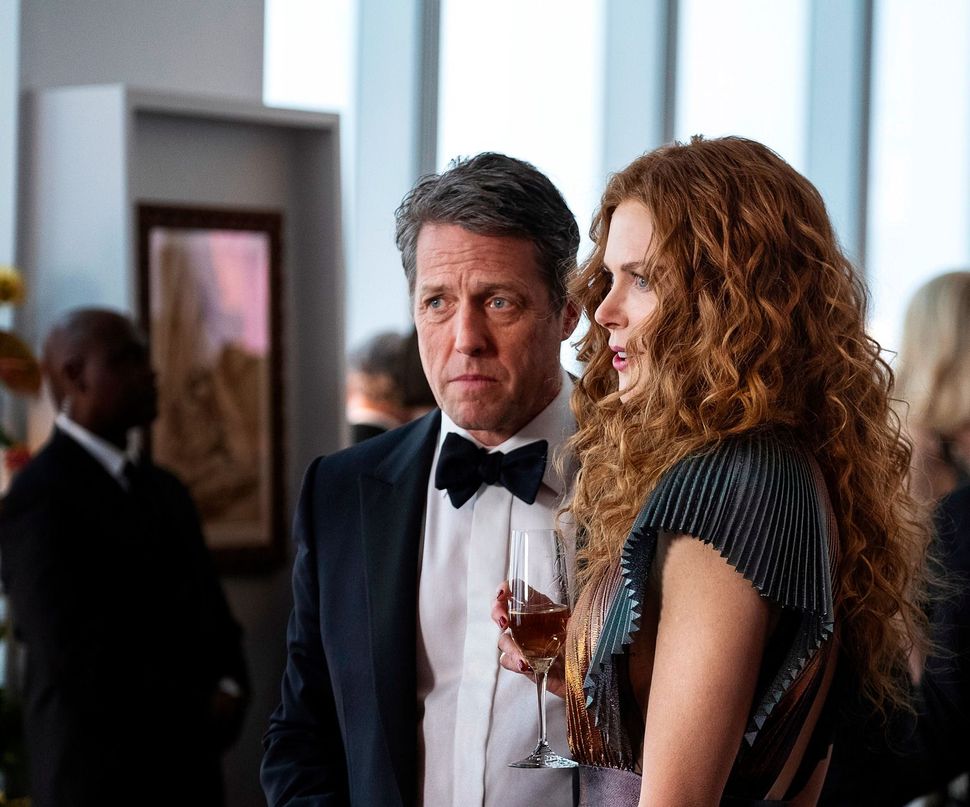 Hugh Grant and Nicole Kidman in “The Undoing.” Image by Niko Tavernise/HBO

Sarah Silverman has mixed feelings about “The Undoing.”

To be sure, there’s plenty to love in HBO’s latest contribution to the prestige TV scene, a miniseries centered around marriage counselor Grace Fraser (Nicole Kidman) who discovers after a gruesome murder that her own seemingly perfect husband (Hugh Grant) may in fact be a philandering sociopath. As much a love letter to Manhattan’s most-moneyed enclaves as it is a crime drama, the show features grown women behaving with shameless adolescent pettiness, an excellent selection of winter coats, and too many opulent interiors to count. It’s the perfect thing to watch while barricaded in a not-so-opulent home with no immediate prospect of showing off the cashmere capes you don’t even own.

During a recent appearance on “The Howard Stern Show,” Silverman said her initial enchantment with the show curdled when she Googled its inspiration, Jean Hanff Korelitz’s taut psychological thriller “You Should Have Known” (2014). A quick search revealed that showrunners created the nebulously WASP-y “Grace Fraser” out of the book’s explicitly Jewish “Grace Reinhart-Sachs.” As a matter of fact, in Korelitz’s novel, almost everyone is Jewish. In the show, almost no one is.

“I f—king knew it,” Silverman said. To her, Grace is part of a pattern, in which big-budget adaptations erase the identities of their Jewish characters. But while David E. Kelley, the “Big Little Lies” alum who created “The Undoing,” certainly did eliminate the novel’s Jewish resonances, that’s just one of several radical changes he made. The result is a series whose ending is a mystery even to Korelitz — who says she’s pleased with what she sees on screen.

“It’s another story,” said Korelitz, 59, a born-and-bred New Yorker and the author of six novels. “It’s a related story. If you’re going to have this tight grip on every detail, you really should not submit your work for adaptation.”

There’s no shortage of taut psychological thrillers on bookstore shelves. But the particular allure of “You Should Have Known,” which combines the domestic carnage of “Gone Girl” with the textured, material richness of “The Secret History,” lies in the specific Jewish milieu it captures. The novel’s Grace Reinhart-Sachs hails from the tastefully understated, rich-but-not-too-rich Jewish intelligentsia of the Upper East Side. It’s a class that (in her eyes, at least) once defined what it meant to be a New Yorker. But her particular tribe’s days at the center of the city’s cultural life are on the wane.

Case in point: Grace sends her son, Henry, to Reardon, a Dalton-esque private school she once attended. Originally founded as a socialist experiment in educating workers and later serving the children of professionals (including Grace), it now caters to the offspring of New York’s elite. Her son’s friends live in prewar buildings where walls have been demolished to create penthouse palaces. Their parents, most of whom do “something at Bear Stearns,” zone out in boredom whenever Grace describes her more prosaic line of work.

Though the book, like the show, revolves around a murder, it’s the tension between these old and new Jews that truly seduces readers. Grace’s increasing sense of alienation from her peers is as interesting as it is annoying: At one point, she disparages a nouveau riche mother for owning a “veritable color wheel” of Birkins, only to refer offhandedly to the three Hermès bags she herself owns, a collection she considers acceptable because she inherited it. The economic distinctions between Grace and her peers are inconsequential in the grand scheme of American economic inequality; but in the specificity with which Korelitz captures them, they’re captivating.

Beyond its central preoccupations, “You Should Have Known” brims over with casual details of Jewish life. Grace’s son studies violin with a Holocaust survivor in a cabbage-scented Harlem apartment. At one point, she befriends an academic at work on a biography of Asher Levy, one of the first Jews to settle in the United States. Later, another character remarks that “no Jew should ever drive a BMW.”

None of those touches make it into “The Undoing.” Like Grace and her husband, several of the supporting characters underwent name changes during the adaptation. Reardon is a generically pricey prep school whose history, socialist or otherwise, doesn’t figure in the show. At an auction to benefit the school’s scholarship students, Grace’s father announces that he’s placed a bid on “Henry Ford’s original dipstick” — an object it’s hard to imagine any member of the novel’s Reinhart-Sachs clan coveting.

But Korelitz sees nothing “nefarious” about those changes, possibly because she’s already experienced adaptation from both sides. Her 2009 novel “Admission” became a movie starring Tina Fey. And with her husband, the poet Paul Muldoon, she transformed James Joyce’s “The Dead” into an immersive theater production for New York’s Irish Repertory Theater, a project that involved changing key details and combining characters. The experience taught her that during adaptation, pretty much everything is up for grabs: Her characters’ Jewishness is “open for adaptation like their hair color, like their jobs, like their friends — like any other element of what’s on the page.”

Because Korelitz never expected to see every detail of her novel translated faithfully to the screen, she’s been able to enjoy watching a linked but distinct project come to fruition. “There’s nothing like the thrill of walking onto a set and seeing hundreds of people running around doing work you don’t understand,” she said. “It’s a very powerful feeling to know that something you created instigated this.”

In any case, the novel’s Jewish resonances aren’t the only social factors to be jettisoned during the adaptation. While Grace Reinhart Sachs thinks of herself as upper-middle class, Grace Fraser has no plausible claim on that term. Like everyone else on the show, she’s indisputably rich, with a brownstone off Fifth Avenue, a stable of designer dresses, and a macher father who doles out bail money from a palatial apartment overlooking the East River. Compared to her fellow Reardon moms, the show’s Grace has a down-to-earth disposition: At one point, she goes so far as to make a sandwich with her own hands. But from the moment she first appears in her marble bathroom, it’s clear that this woman doesn’t chauffeur anyone to music lessons in Harlem.

In light of what the series offers its viewers, both changes make sense. “The Undoing” beguiles not with its whodunit plot but with the window it provides into the luxurious (if occasionally lethal) world of the wealthiest Americans. Or, at least, a version of that world: Like other shows in this vein, including “Succession” and Kelley’s own “Big Little Lies,” the series proffers a cookie-cutter vision of extreme wealth, a landscape populated by recognizable status symbols and devoid of the specific cultural factors that color even the most rarefied real-life social spheres. Viewers want to use Grace’s Vitamix, run their hands over her linen wallpaper and pace her private upstate beach while swaddled in her plush peacoats. “The Undoing” allows them to participate vicariously in these generally enviable pleasures without the headache of parsing her specific brand of Jewishness.

Real estate wisdom tells homeowners to hide family photos before showing a house, a sleight of hand that encourages potential buyers to envision themselves living there. By smoothing away the religious, cultural, and economic particularities of Grace Reinhart-Sachs’ life, “The Undoing” has done something similar. Ultimately, the show creates a world both extravagant and empty. It’s a place anyone can inhabit — in their imagination.

‘The Undoing’ undid the Jewishness of the book that inspired it. Here’s why the author doesn’t mind