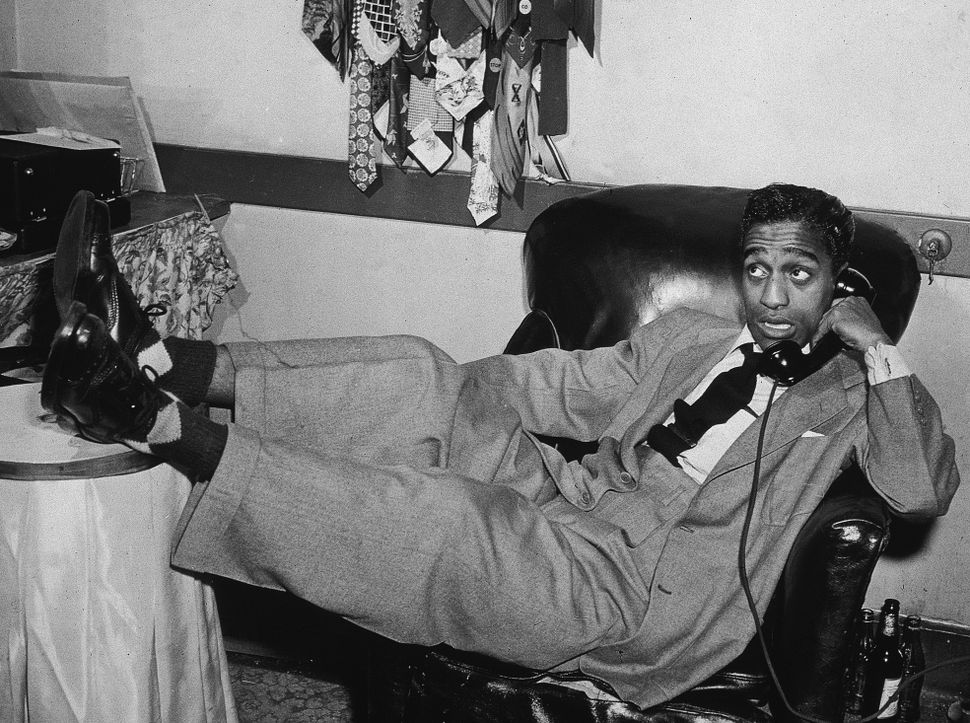 Tracey Davis, the daughter of Sammy Davis Jr., who died on Nov. 2 at age 59, co-wrote two memoirs of her father, implying that as the proverb goes, imitation is the sincerest form of flattery.

From the mid-1950s onward, Hollywood stars including Carroll Baker, Marilyn Monroe and Elizabeth Taylor converted to Judaism, but Davis was the only one not to do so because he was marrying someone Jewish.

Instead, Davis’ conversion in 1961 was reportedly inspired by hospital visits by the entertainer Eddie Cantor (born Isidore Itzkowitz) after the former was injured in a 1954 car accident. Davis’ experience of physical suffering is plainly visible by comparing films of him onstage before and after the accident. 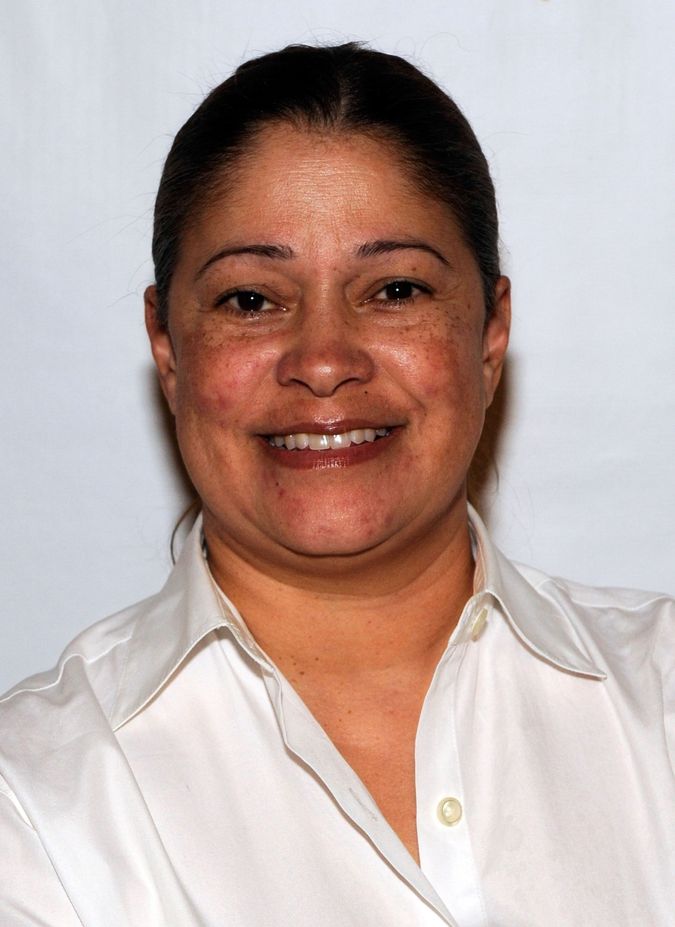 Tracey Davis: The daughter of entertainer Sammy Davis Jr. has died at the age of 59. Image by Getty Images

A lightning bolt of dancing, singing, mimicry and clowning skills, Davis began performing at age three. He attended Yiddish dramas on New York’s Lower East Side, soaking up theatrics without understanding a word.

His talents were honed by attentively watching performers he admired. One such was the Jewish comic and mimic Larry Storch, still thriving today at age 97, who coached Davis in imitating Hollywood stars.

Davis’ imitations, especially of American celebrities, showed a sensitive musical ear. They retain their freshness today, unlike later comics such as Billy Crystal, whose versions of Sammy Davis, Jr., intended as homages, are dated, mannered, inexact, and due to the use of blackface, unviewable.

More seriously, Davis’ imitations of Yiddishkeit were as earnest as Thomas à Kempis’ devotional book, “The Imitation of Christ.” Davis believed that African-Americans and Jews should feel solidarity as communities. He acquired this certainty by reading about suffering and endurance in Abram Sachar’s “History of the Jews.” (1930)

Yet Davis’ understanding of Jewish-black affinities went beyond shared miseries. As he explained to Ebony Magazine in February 1960, Judaism was a way to seek “inner strength to turn the other cheek,” using a phrase in Christian doctrine from the Gospel of Matthew, referring to avoiding a vengeful spirit.

Although his dogma was heterodox, he was certain about essentials: “Jews have become strong over their thousands of years of oppression and I wanted to become part of that strength. As a Negro, I felt emotionally tied to Judaism…Judaism gave me security and understanding.”

He prepared for conversion with Rabbi Harry Sherer of Las Vegas. Davis had been referred to Sherer by Rabbi Max Nussbaum of Hollywood’s Reform Temple Israel, a Civil Rights activist.

In November 1960, after Davis announced plans to marry the Swedish actress May Britt, neo-Nazi protestors in California picketed theaters where he was appearing to express their outrage.

Davis and the temple staff received death threats, until Rabbi Nussbaum relocated the ceremony to Davis’ home, where it was conducted by a junior colleague, Rabbi William M. Kramer.

Another gag recounted by Davis himself, has him being asked about his golf handicap and retorting, “Talk about handicap. I’m a one-eyed Negro who’s Jewish.”

Davis, who fought with racist American soldiers during his military service, was fully aware of potential social drawbacks of ethnic identity. For years, his biographies altered his mother’s origins from Cuban to Puerto Rican in the wake of the Bay of Pigs Invasion, to dodge anti-Cuban feelings festering in the U.S.

A 2018 PBS documentary opens with Davis misleadingly kidding an audience, “I’m colored, Jewish and Puerto Rican. When I move into a neighborhood, I wipe it out.”

Davis experienced the full onslaught of racial prejudice in 1940s and 1950s America, like other African-American performers, but was delighted to be accepted by many white performers, most famously the Rat Pack.

Given the amount of hatred he was exposed to, it is only natural that he appreciated friendships where he could find them, among Jews or African-American. Some biographers and journalists have misunderstood this to mean that Davis “wanted to be white.” In fact, he demonstrably embraced his identities as a black American and a Jew.

In 1965, he was guest of honor at an Independence Ball saluting the State of Israel in Washington, DC, where he was praised by Avraham Harman, Israeli ambassador to the U.S., for helping to advance the Jewish State’s development in “a spirit of devoted friendship.”

In July 1969, Davis made a one-day trip to Jerusalem, declaring upon arrival that Israel was the “mother country of my spirit and my religion.” At the Western Wall, he added to reporters: “Like every Jew, my feelings at the Wall were deep and personal. This is my religious home.”

In September 1969, he returned to perform for Israeli soldiers in Army camps and military hospitals. Davis refused any payment for his performances, stating, “When I come to my homeland I don’t want to make money there.”

In 1982, Davis returned home to Israel, but was also a defender of Judaism stateside, attending a prayer service in August 1983 at West Hartford, Connecticut’s Young Israel Synagogue after it was damaged in an arson attack.

Davis told worshipers at the August service, held in the synagogue’s basement because its prayer hall had been destroyed: “I share your grief and your sorrow. When I saw the destruction that the fire did to your synagogue, my Jewish heart wept as all of us are now weeping. I tell you from the bottom of my heart that they can burn our synagogues, they can set fire to our Torah, they can torch our holy books – but they can never destroy our spirit… We must respond to this challenge as one people united in their determination that our spirit is still strong and vibrant…We will rebuild this synagogue and we shall glory in the light that it will radiate for all our Jewish brethren and for all people everywhere.”

It is certain where Davis’ allegiance was, so all the trite jokes about his religion may safely be disregarded. Davis’ ties to Judaism are best evaluated on their own terms, as highly personal choices. It is uncertain whether other African-American Jews were inspired by his advocacy, since as the author Julius Lester observed in a memoir, “few seem[ed] to take Sammy Davis, Jr. seriously as a Jew.”

Similarly, Davis’ long-overlooked funding of Martin Luther King’s activism and many black arts initiatives have only recently been explored by the historians Emilie Raymond and Jonathan Fenderson.

Even Davis’ much-derided, disappointed attempts to persuade Richard Nixon to promote Civil Rights acquire a certain dignity in retrospect, especially as seen in “Peace, Togetherness, and Sammy,” (1972) a U.S. Army documentary about Davis’ performances in Vietnam as part of an anti-drug abuse council.

As his daughter Tracey fully knew, her father’s complexity and contradictions did not detract from his achievements as a black Jew. He advanced racial harmony as well as his fabled status as an entertainer. Sammy Davis’ imitation of Judaism was an Imitation of Life.

Here’s a clip of Sammy Davis playing Tevye from “Fiddler on the Roof” on a 1969 TV show.