Yes, he sold art to the Nazis — but was he a traitor or a hero? “The Last Vermeer,” marking producer Dan Friedkin’s directorial debut, is part melodrama and part thriller, but at its core it’s an exploration of moral complexities that regrettably disappears into distracting subplots and a large cast of indistinguishable characters. By the time the viewer appreciates the complicated ethical and psychological questions at play, the film is almost over.

Loosely based on Jonathan Lopez’s provocative book “The Man Who Made Vermeers,” the movie focuses its lens on the netherworld of stolen art during the Holocaust, a topic that’s been addressed in films like “The Woman in Gold,” “The Monuments Men,” “The Counterfeiters” and the documentary, “Chasing Portraits.” Here, Joseph Pillar (Claes Bang), a Dutch Jew and former resistance fighter, who has been assigned the task of identifying and redistributing such art, is on the heels of notorious wheeler-dealer-artist-forger Han Van Meegeren (a great performance by Guy Pearce). 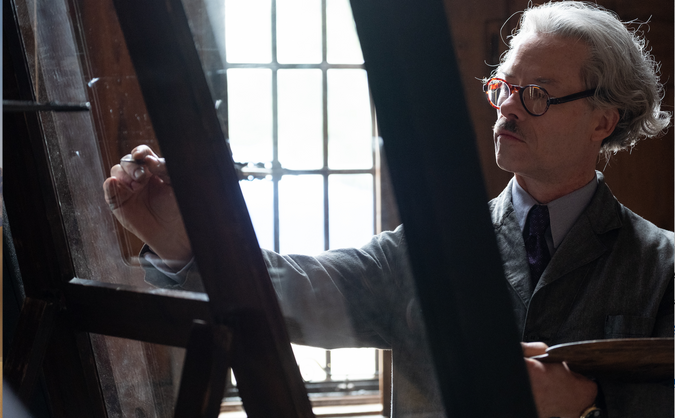 The latter is charged with selling Vermeer’s “Christ and the Adulteress” to Nazi leader Hermann Goring, a capital offense, the penalty for which was death by firing squad. Set in Holland during the postwar years, there is no shortage of public executions, summarily administered, throughout. As the cat and mouse game evolves Pillar has a change of heart, viewing his prey through a new prism, and in the process becomes his defender. In a jail cell awaiting trial Van Meegeren maintains that he forged the painting among many others and sold the brilliantly rendered — and authenticated – counterfeits to Nazis for large sums of money.

Indeed, contrary to the accusation that he’s a traitor-collaborator, he says he was screwing the enemy while sticking it to an art world that had unfairly dismissed him as a less than mediocre painter. For reasons that are not fully clear Pillar finds the story plausible and becomes his co-attorney, determined to see his client vindicated.

The film doesn’t really get underway until the climactic trial, which unfortunately has a touch of an old “Perry Mason” episode. Pillar commits a wild act and Van Meegeren moves from villain to hero as the plot twists and turns. 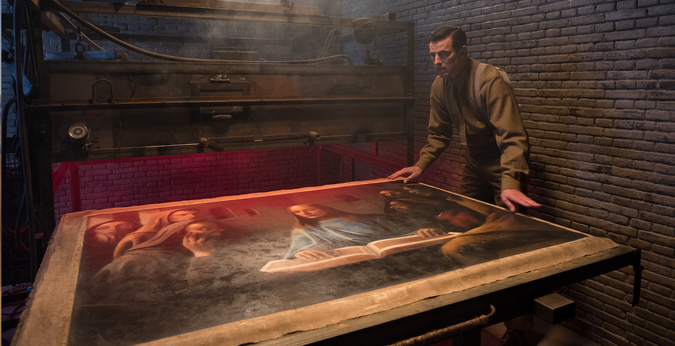 Sold to the Nazis: Moral ambiguities during wartime are at the heart of ‘The Last Vermeer,’ directed by Dan Friedkin. Image by Tri-Star Pictures

As is the case with many biopics and historical dramas, the questions of what’s real and what’s dramatic license are present and intrusive throughout. According to Lopez’s book, Van Meegeren was neither an anti-fascist nor a failed painter savoring a vendetta. Rather, he was a classic opportunist and crook who was in it for the money, nothing more.

But beyond those factual stumbling blocks, the movie simply doesn’t work as drama. Its hero Pillar is one-dimensional and the writing and direction are sub-par.

In two other recent movie roles (“Burnt Orange Heresy” and “The Square”), both coincidentally dealing with the art world —Bang successfully brought to life, respectively, a creepy, narcissistic art critic and a Swedish art museum curator, whose “Radical Chic” liberal views are put to the test in a darkly comic universe.

Here, he is a virtually nondescript, unaccounted-for Everyman. We know nothing about what makes him tick, not least what role, if any, his being Jewish plays in his motivations. The scriptwriters try to suggest some unacknowledged moral ambiguity in Pillar when Van Meegeren cryptically says to him, “I am sensing that perhaps it is you who needs redemption.”

Only later do we learn that Pillar has dumped his estranged wife (Marie Bach Hansen), perhaps without cause. She is photographed as a guest at a Van Meegeren party where she is flirting and frolicking with Nazis. She defends herself insisting she’s working for the allies. Of course, it’s equally possible she’s attracted to SS men or simply attempting to survive. In retrospect the viewer understands her tenuous position. Pillar does not, though he himself takes an action that is open to moral interpretation.

Still, despite the film’s shortcomings it’s worth viewing for Pearce’s performance as a preening Epicurean nihilist who loves playing the trickster and is charming even at his most repellent and menacing. It’s never obvious — and he is all the more seductive for this reason — if he’s a hero, a traitor or just a careerist or all of the above.

In the end he’s a product of an era in flux, a post-wartime world where the definition of morality is fluid. All the characters are similarly challenged. That’s the story that begged to be told, but it is ultimately buried in this film.

Yes, he sold art to the Nazis — but was he a traitor or a hero?