How America’s first Jew gave the turkey its name 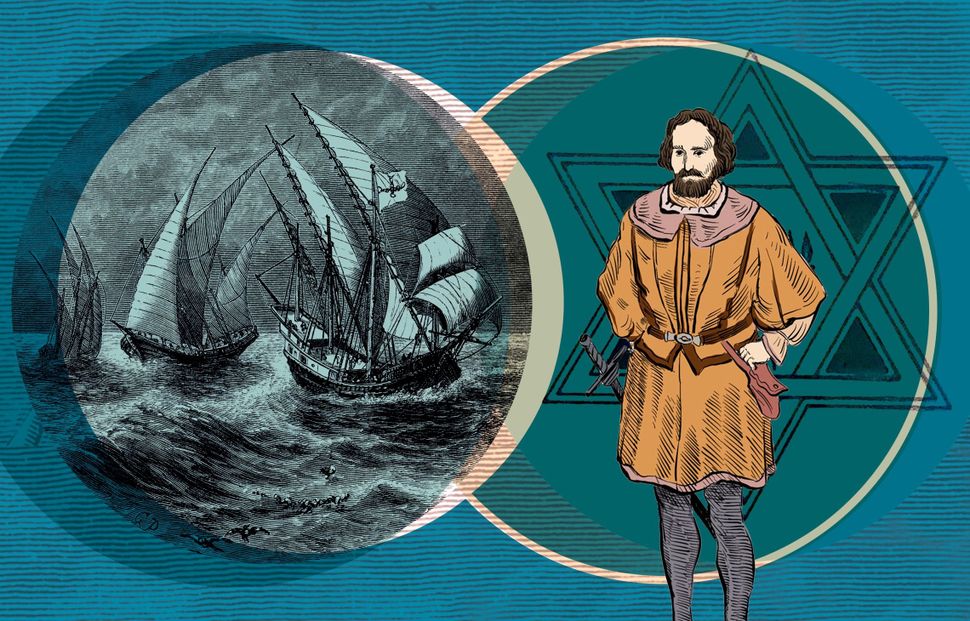 Author’s Note: This article, detailing the mysterious life of America’s first Jew, was originally published in 2018. Among the interesting trivia about Luis de Torres’ journey from Spain is his purported naming of the North American turkey, a theory that, combined with his pilgrim-like voyage to escape persecution, make it appropriate Thanksgiving Day reading.

For all their clout in the American imagination, the Niña, Pinta and Santa Maria don’t appear to factor much into the American Jewish tapestry. But Christopher Columbus, a devout Italian Catholic sailing at the behest of the king and queen of Spain, was certain that, when he arrived in Asia, he’d encounter descendants of the Lost Tribes of Israel. And since he anticipated a rendezvous with Arabic and Hebrew speakers, Columbus brought one along.

Luis de Torres was the first Jew in the Americas, one of the first Westerners to contact the native population, and maybe even the first to develop a smoking habit when he was offered a New World novelty: tobacco.

As described in Maria Rosa Monacal’s 2002 book, “The Ornament of the World,” Torres left with Columbus’s first voyage on August 3, 1492, a day after the Spanish Edict of Expulsion ordered the forced exodus of the country’s Jews. He was born Yosef ben Ha Levy HaIvri before being christened with his new name shortly prior to leaving: As was the case with many conversos at the time of the Inquisition, his conversion was probably not a voluntary act. While conversos were not supposed to be subject to the expulsion, they were specifically targeted by the Inquisition and many saw it as their cue to split.

Leaving his native land from the port of Palos, Torres was probably not the only Jew onboard, though he had the highest profile. Torres, who according to a Haaretz article on conversos in the New World served as an interpreter for the governor of Murcia, was charged with being Columbus’s translator in “India,” which is what we now know as China and which, of course, was actually the Americas.

“Torres was supposed to be able to speak in Arabic or Hebrew and some other ancient languages,” Laurence Bergreen, author of “Columbus: The Four Voyages, 1492–1504,” told me in a phone interview. “We laugh at it now because it sounds so naive, but it gives you an idea that that was the norm then. That was what Columbus thought he might encounter, and it also gives us a sense of how misguided Columbus was on all four voyages.”

On November 2, 1492, Torres was sent inland from Cuba’s coast to scout the island and contact the “Cubanacan,” a person of great power. Torres returned to the Santa Maria’s base camp on November 6 with reports of a village of 1,000 inhabitants that treated him and his companion, Rodrigo de Xerxes, as if they were divinities, touching and kissing their hands and feet and begging them to stay longer. These people didn’t speak Arabic, Hebrew, Aramaic or Chaldean, or, for that matter, Portuguese or Spanish like Torres did, but they were able to communicate with him through native guides and even introduced him to some of their local customs, which included drinking “herbs” and rolling cigars — a practice, Haaretz reports, that Xerxes brought back to Spain, where he served time at the hands of the Inquisition for introducing to his fellow Spaniards to the vice of smoking. Beyond these facts, drawn from primary source records by Columbus himself, we don’t know much about Torres’s origins, though that doesn’t stop many hopeful members of the tribe from speculating.

“With Columbus we know a lot, but still there are gaping holes. Conversos tended to want to disappear and not identify themselves,” Bergreen said, noting that Columbus did know something of Torres’s past. “Columbus believed him to be a recent convert to Christianity… and there were probably a bunch of others among the crew members, as well. His original name was believed to be Yosef ben HaLevi HaIvri (in Hebrew, Joseph, son of Levi). Assuming Columbus was correct, and he probably was, that would make Luis de Torres, to use his converso name, the first Jewish person to settle in the New World, because he actually stayed behind. Columbus left him there at a small port.”

Despite a fuzzy background, Torres’s memory is kept alive in a rather surprising place: the Bahamas. In the city of Freeport, sandwiched between two churches, you can find the squat white stucco façade of the Luis de Torres synagogue, which laid its cornerstone in 1972.

We’re not sure what became of Torres after Columbus left the picture, though a popular account from Meyer Kayserling’s 1894 book, “Christopher Columbus and the Participation of the Jews in the Spanish and Portuguese Discoveries,” suggests he stayed behind to achieve great wealth as a landowner. Bergreen thinks it’s more likely that he ended up dying on a settlement on the island of Hispanolia, maybe killed by the natives. Many Jewish sites like Haaretz and J-Grit (a so-called “Internet Index of Tough Jews”) favor the rosier prediction and go so far as to give the Spanish converso a role in naming the North American turkey.

As legend has it, Torres saw the bird; thinking it was a kind of parrot, he assigned it the Hebrew name of that animal, “Tukki.” This story, like the reports of his finding fortune in the New World, are almost certainly fictive. But Torres’s expedition, though more than a century earlier than the Mayflower voyage, does resonate a bit with the Thanksgiving story.

Torres’s motivation for a life at sea was different than many explorers’ yen for fortune, fame and discovering unmapped parts of the world — though maybe not entirely dissimilar to one sometimes ascribed to Columbus.

“There’s a book, ‘Sails of Hope’ [by Simon Wiesenthal], about how Columbus was some sort of converso himself,” Bergreen said. ”I think that’s really overplaying it, but I think what you can say is that he was going for two reasons: for greed and also because he did feel this really strong religious impulse which sort of plays out with other people around him.”

Given the facts, Luis de Torres was a refugee of faith, and for that reason, we may consider him the first of the pilgrims.

PJ Grisar is the Forward’s culture reporter. Contact him at [email protected]

How America’s first Jew gave the turkey its name