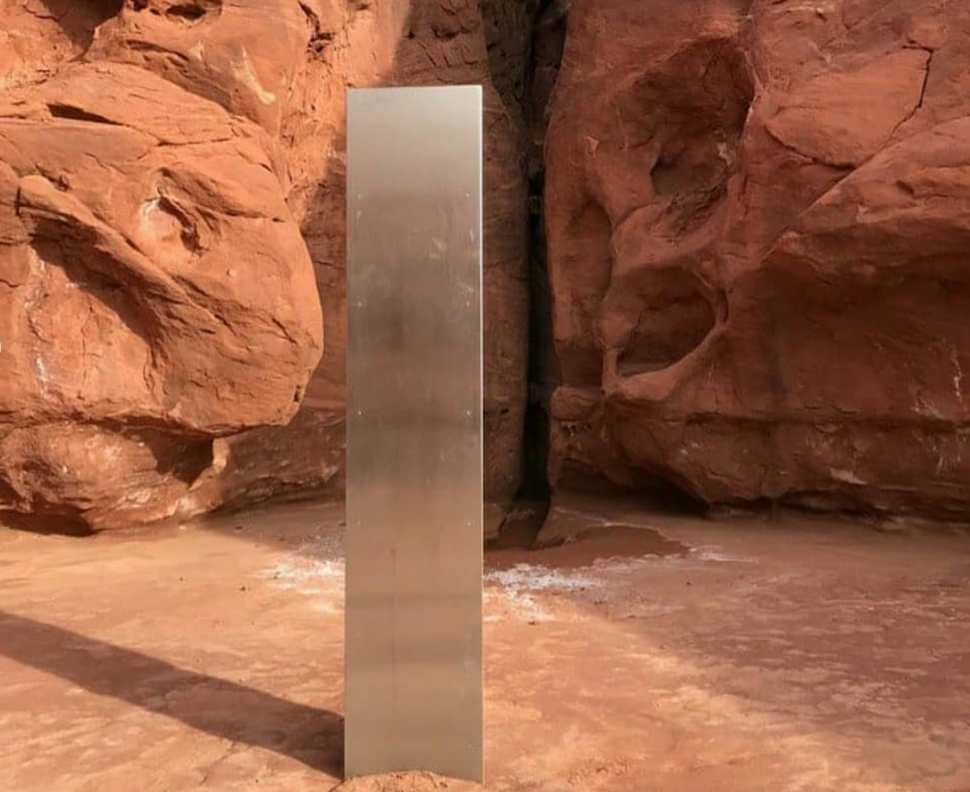 It’s a mystery some cinephiles may not want solved: Who — or what — placed a towering metal monolith in the middle of Utah desert?

On Nov. 18, officers for Utah’s Department of Public Safety discovered the 10 to 12-foot tall edifice, which looks like a stainless steel prototype of Stanley Kubrick’s famously cryptic monolith from “2001: A Space Odyssey,” while counting bighorn sheep from a helicopter.

“One of the biologists is the one who spotted it and we just happened to fly directly over the top of it,” pilot Bret Hutchings told Utah broadcaster KSL-TV. “I’m assuming it’s some new wave artist or something or, you know, somebody that was a big [‘2001: A Space Odyssey’] fan.’”

While the red rock backdrop for this possible art piece resembles that of the hominid-teeming “Dawn of Man” sequence that begins Kubrick’s film, none of the Public Safety employees mentioned an ominous thrumming coming from the sculpture.

What exactly Kubrick’s monolith portends for the ape people — and later, a crew of astronauts — who discover it remains one of the film’s abiding mysteries, though some have likened worship of it to the Golden Calf or, contrarily, seen the structure as a wordless tablet of the word of God. Kubrick never gave any definitive answers, leading some to seek them in his co-writer Arthur C. Clarke’s novel of “2001.”

Whatever your theories on this curious object’s meaning, it is a confirmed headache for the Utah DPS.

“It is illegal to install structures or art without authorization on federally managed public lands,” the Department said in a statement, “no matter what planet you’re from.”