This Thanksgiving, I will remember not to take my family for granted 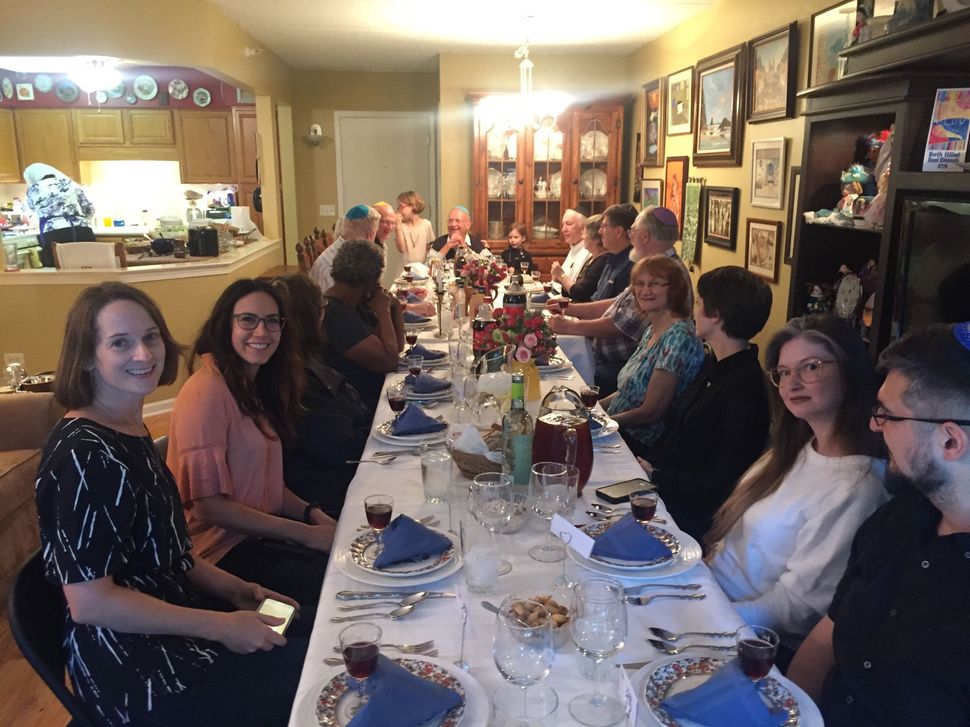 Family: The author joins her cousins for a meal. Image by Courtesy of Soraya Fata

When I was growing up, my mother always encouraged me to form strong connections with my cousins. “Blood is thicker than water,” she said.

She was a second generation Jewish-American. She grew up in Chicago’s Albany Park, which was a vibrant Jewish immigrant neighborhood at the time. Her Jewish-Persian father had one sister and two twin brothers; combined, they had 12 children on that side of the family. Naturally, the cousins were known as the 12 tribes of Albany Park. My mother grew up poor, but what her family lacked in resources, they made up for with big heartedness. She had a tight-knit family that had been raised with strong family values and traditions, which they did their best to pass on to the next generation. Every Rosh Hashanah, Passover and Yom Kippur, we gathered in the humble two-bedroom apartment of the second eldest tribe member’s home, delicious homemade food spread across tables, decorated with Judaica, which spanned the entire dining and living room.

I loved my extended family, and enjoyed the traditions we shared, but always felt like an outsider. Maybe it was because my father was a secular Muslim from Iran. Even though he participated in all the Jewish holidays, attending synagogue with my mother and me on high holidays, respectfully placing a yarmulke atop his head, it was clear the traditions were not his own. We rarely celebrated Jewish traditions in our home, but rather at the homes of relatives. Instead, I grew up with a layer of Persian-ness. My family hosted and attended fancy dinner parties with recent immigrants from Iran, which made me feel more worldly. The divide was further aggravated by the unspoken fact that my parents were well-off financially, and I spent my childhood running from one elitist afterschool activity to another — piano lessons, ballet lessons, ice skating, ski club.

At 18, I left the Chicago suburbs to go to college. I studied abroad in Seville, Spain my junior year and became “Europeanized.” I sipped wine and ate tapas in the afternoon sun, and developed a strong preference for espresso over drip coffee. I shopped at Mango and Zara before anyone in the States had heard of them, and stayed out all night practicing my Spanish with locals while drinking in plazas and dancing until dawn at discotecas.

After college, I moved out east to Washington, D.C. for law school and stayed for a decade. During my time working and living in “The District,” I crossed paths with the heads of international organizations, policy analysts, politicians, lobbyists, World Bank and IMF employees, and diplomats from around the world working on Embassy Row. I rarely went home, and I rarely kept up with the lives of my cousins who were living the typical Midwest life I had escaped.

Family: The author clowns around with some of her cousins. Image by Courtesy of Soraya Fata

At 33, I started my international career, first with a non-governmental organization in Istanbul, Turkey, and then with the United Nations High Commissioner for Refugees, on various missions in Iraq, Ecuador and Egypt. Soon, I was traveling first class and skipping immigration lines at country borders and had zero desire to move back to the Midwest and be near my family again.

Then, my father got sick and I became acutely aware of the passing of time. My parents were getting older and there was no one to care for them aside from me. At the same time, the ticking of my biological clock set off a baby panic so loud I couldn’t ignore it, and suddenly I found myself reevaluating my priorities, and considering a move home. Even though my circumstances abroad weren’t exactly the best for finding a life partner; I clung tight to other aid workers I met along the way and hoped somehow things would work out only to discover how few relationships survive fieldwork.

When I made the decision to return to Chicago, nearly 20 years after I had left, I was shell-shocked. I didn’t know what would happen, or what life I was returning to, but I knew that the international life I had built was not sustainable if I wanted a family. I immediately started fertility treatments to cryopreserve my oocytes, a fancy term for freezing my eggs. The month I met the man who would become my husband, I was going through a second round of IVF to freeze my eggs. He, a divorcée seven years my junior, was in no rush to get remarried. I told him, I didn’t care about marriage, but I wanted a baby and that we didn’t have much time since I was 39. We tried naturally a few times to see what might happen and then we stopped trying and got to know each another a little more. After a year, we sought help from the fertility experts.

There was a mass on my right ovary in one of the scans. We watched it, hoping it was a cyst that would resolve itself. It didn’t. “It could be cancer,” my fertility doctor said, and she was right. On Jan.10, 2019, I was diagnosed with ovarian cancer and my chances of becoming a mother were severely curtailed. In the two years since my cancer diagnosis, my husband and I have quietly suffered. During that time, we underwent six additional IVF egg retrievals, two IUIs and too many shots, scans and doctor’s appointments to count, with little success. It was a lot of hormones, a lot of resources, a lot of hope and then disappointment. I became a zombie walking through life on fertility medication, stunted in every other area of my life. All I had to show for my efforts was heartache and a dwindling savings account.

As the path to parenthood started to narrow, to my surprise, so did the divide between my cousins and myself. One of my cousins offered to donate eggs to us. I was moved by her genuine concern and willingness to go through IVF for us. We considered it, but felt it was too early to give up. Fast forward to age 42, and we managed to make a single chromosomally normal embryo of our own. As we prepared to transfer our little “frozen girl” as we call her, despite anxiety and fear around the pandemic, we ran through the frozen embryo transfer protocol with a mock cycle to see how my body responded. More hormones, more shots (this time of the painful intramuscular variety), more time off work, more money spent, more tests and more trauma. I tested positive for BCL6, a marker for endometriosis showing my uterine lining was inflamed and that our one and only embryo would likely not implant. The doctor put me on hormone suppression therapy for two months to bring down the inflammation, which was extended to three months. And now, as I write this, I am on my fourth month of experiencing hot flashes, night sweats, moodiness, joint pain, all the joys of temporary menopause. “Lucky me, I get to experience you going through menopause twice,” my husband tells me when it’s too much for him.

When another one of my cousins heard my story, she offered to be our gestational surrogate. I felt overwhelmed with shame by her act of altruism, so opposed to my own behavior all the years I failed to keep up with my family, forgetting to wish them a happy birthday or anniversary or send a gift when they had a baby. I was so wrapped up in my own world, too busy and perhaps too arrogant to notice all the milestones they were hitting back home. Yet, here they were, stepping up to help me and my husband in ways I never would have expected. Now, I finally understood what my mother had been trying to teach me about family bonds. They saw us suffering, saw our pain and instead of turning away from it the way so many friends and acquaintances had, they pushed their way closer to us. Maybe as Jews, we are used to seeing suffering in the world and don’t shy away from it, but rather hold on tightly to our loved ones, family members and community.

I keep thinking of the concept of mitzvah, defined simply as a good deed, but one that can also refer to an individual act of human kindness performed to fulfill a commandment in accordance with Jewish law. I don’t know how the story will turn out, whether I will need to accept their mitzvahs or not, but one thing is certain; I will never ever take my family for granted again.

This Thanksgiving, I will remember not to take my family for granted