Your Jewish guide to the Grammy nominations 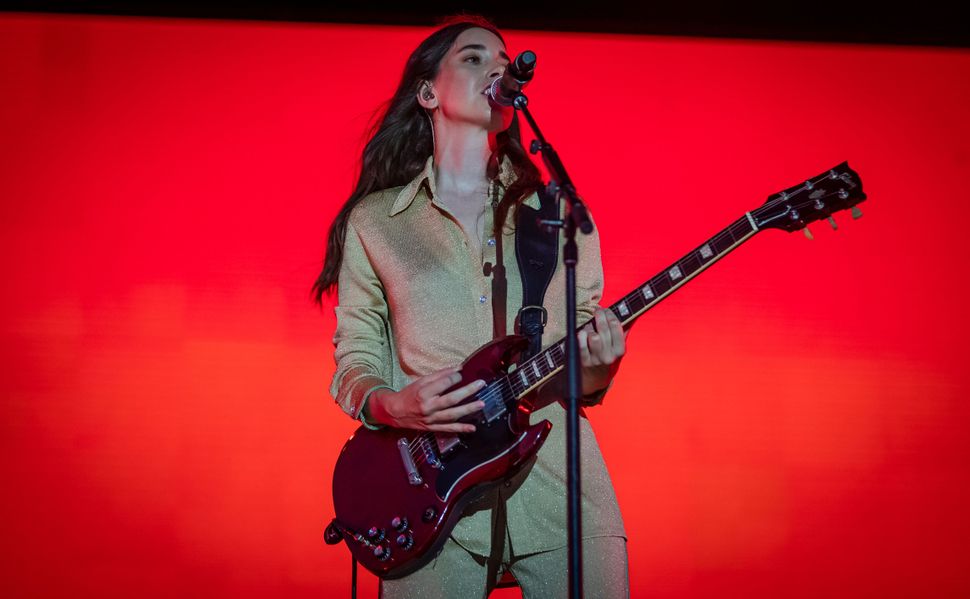 Music is not like baseball. With the latter, you choose a favorite team and stick with it through its ups and downs over the years. (Believe me, as a lifelong, beleaguered fan of the New York Met, I know of what I speak.) With the former, however, if the diverse and all-encompassing Grammy Award nominations are the league championships and the final awards are the World Series, then one way to approach the awards season is by tribe — especially when few if any of your real favorites even show up on the scorecard. When in doubt, root for members of the extended family.

This year, members of the tribe are undoubtedly rooting for sister trio HAIM to win the Album of the Year award for their well-deserved, mainstream breakthrough, “Women in Music Pt. III.” The three Haim sisters — Este Arielle, Danielle Sari, and Alana Mychal — are the daughters of musical parents. Israeli-born Mordechai “Moti” Haim was a drummer when he wasn’t playing professional soccer in Israel; their mother, Donna, who grew up in Philadelphia, once won a contest on “The Gong Show” for singing a Bonnie Raitt song. Fortunately, the girls overcame the embarrassment of singing cover tunes as members of the multi-generational family band Rockinhaim. The girls grew up listening to Israeli pop singer Ofra Haza alongside Stevie Nicks, and, from the evidence of their hit single, “Summer Girl,” New York City rock poet Lou Reed was also on the family playlist. Haim is also nominated for Best Rock Performance for “The Steps.”

But Haim isn’t the only tribal choice in the Album of the Year category. The multicultural neo-soul singer Jhené Aiko claims Spanish, Dominican, and Japanese descent through her mother and Native American, African-American, and German-Jewish descent from her father. Aiko also got a nomination for her duet with John Legend, “Lightning & Thunder,” in the Best R&B Performance category.

Although she’s not Jewish, Taylor Swift’s “Folklore,” also nominated for best album, was coproduced by the National’s Aaron Dessner and Jack Antonoff. The latter, a New Jersey native, attended the Solomon Schechter Day School of Bergen County, and also is up for the Producer of the Year award; Dessner and his twin brother Bryce form the Jewish core of indie-rock icons The National. Brother Bryce is also an avant-garde composer who was commissioned to write “Aheym,” which means “homeward” in Yiddish, by Kronos Quartet. He once said, “My brother and I have always been fascinated by liturgical religious melodies in Judaism.” Aaron Dessner also cowrote the songs on “Folklore” with Swift, including “Cardigan,” which is nominated for Song of the Year and Best Pop Solo Performance. Antonoff vies with Dan Auerbach, best known as guitarist-vocalist of the Black Keys, for the Producer of the Year award.

A dark horse candidate to win the Record of the Year, Best Pop Solo Performance and Best Progressive R&B Album awards is Doja Cat, born Amala Ratna Zandile Dlamini, for “Say So,” a melodic fusion of pop-R&B and hip-hop. Doja Cat grew up mostly in Los Angeles, where she was raised by her mother, Jewish-American painter Deborah Elizabeth Sawyer. She claims never to have met her father, South African actor, composer and film producer Dumisani Dlamini. Doja Cat is also nominated for Best New Artist, which is often a kiss of death, so if you’re a fan, you may want to hope someone else wins in that category.

New York City-based rock heroes The Strokes enjoyed a comeback of sorts this past year powered by “The New Abnormal,” their first full-length LP in five years. Apparently, it was worth the wait: the album, featuring the signature guitar licks of Nick Valensi — whose father is a Tunisian Jew — got a nomination for Best Rock Album. Speaking of New York City bands, Spike Jonze might walk away with the trophy for Best Music Film for his documentary, “The Beastie Boys Story.”

Jewish artist “I am not a Scientologist” Beck, for whom the Grammy category Best Alternative Music Album was practically invented, also released a great comeback album this year called “Hyperspace,” which of course got a nomination in “his” category. And everyone’s favorite rapping former Jewish day school student, Drake, received a nomination for “Laugh Now, Cry Later,” in the Best Rap Song and Best Melodic Rap Performance categories.

Two sort-of-Jews compete for the Best Spoken Word Album award. Although she was raised “very, very Catholic,” Rachel Maddow — who received a nomination for “Blowout: Corrupted Democracy, Rogue State Russia, and the Richest, Most Destructive Industry on Earth” — got her last name from her paternal grandfather, a Russian Jew named “Medvedof.” Among others, Maddow vies with Ronan Farrow — an estranged son of Woody Allen — for his recording of “Catch and Kill.”

And among the five nominees for Best Comedy Album are Jerry Seinfeld for “23 Hours to Kill” and Tiffany Haddish for “Black Mitzvah.” Haddish’s father is an Ethiopian Jew; last year, at age 40, Haddish had a bat mitzvah ceremony presided over by Reform Rabbi Susan Silverman, sister of comedian Sarah Silverman.

A few venerable Jewish artists continue to get nods from the Recording Academy, including Queens, N.Y.-native Burt Bacharach for Best Traditional Pop Vocal Album, for his co-release with Daniel Tashian, “Blue Umbrella.” The late Leonard Cohen—who died four years ago—got a nod for Best Folk Album for his posthumous release, “Thanks for the Dance,” which Cohen’s son, Adam Cohen, assembled from vocal tracks his father recorded during the same sessions that produced Cohen’s brilliant “You Want It Darker.” And the immortal brother songwriting duo of George and Ira Gershwin are still being recognized for their efforts, via a new recording of their opera “Porgy and Bess” by the Metropolitan Opera Orchestra & Chorus, which vies for Best Engineered Album, Classical and Best Opera Recording.

The original cast album of “The Prince of Egypt,” a musical about a fellow named Moses with music and lyrics written by Stephen Schwartz, is up for Best Musical Theater Album, as is the new off-Broadway cast album of “Little Shop of Horrors,” with songs written by the Jewish songwriting duo of Alan Menken and Howard Ashman.

Thomas Newman, of the film-scoring Newman dynasty that includes Alfred, Lionel, and Randy Newman among a handful of others, is keeping the family flame alive for his work on the movie “1917,” which has a chance to win Best Score Soundtrack for Visual Media. And Jewish banjo visionary Béla Fleck could win the Best Historical Album award for “Throw Down Your Heart: The Complete Africa Sessions.”

Your Jewish guide to the Grammy nominations