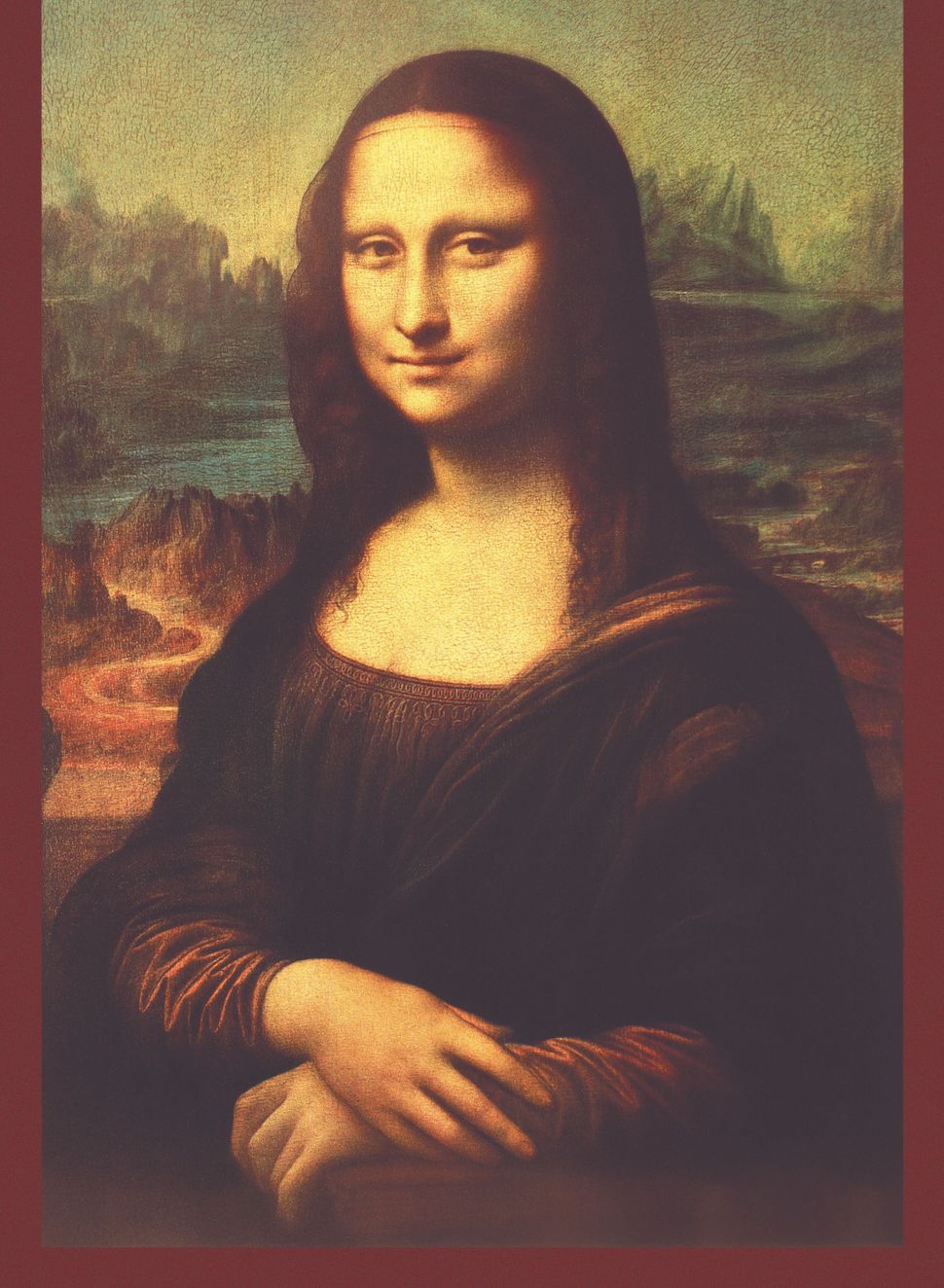 Art mavens have until Dec. 15 to bid on the chance to witness the annual inspection of Leonardo da Vinci’s Mona Lisa outside of its display case in the Louvre Museum. Mona Lisa mania, as the Louvre calls it, has affected people, including many Jewish fans, ever since the portrait was painted around the year 1500.

As “Mona Lisa,” the 1950 pop song by American Jewish composer Jay Livingston (born Jacob Harold Levison) explains, the “lady with the mystic smile” lures onlookers, before proving to be “just a cold and lonely, lovely work of art.”

Yet well beyond Mona-Lisa Saperstein from the NBC comedy TV series “Parks and Recreation,” described as a “true agent of chaos,” Leonardo’s portrait has been linked to Yiddishkeit.

Some of this remains wishful thinking, like the 2011 report that Silvano Vinceti, an ecological campaigner, had discerned the number “72” under the arched bridge in the backdrop of the Mona Lisa, known in Italian as “La Gioconda” or the jovial woman. As Vinceti informed the Associated Press, 72 is a number with “some significance” in the Kabbalah.

Indeed, the 72-fold name or Shem HaMephorash (the explicit name of the deity) is evoked in *“Sefer Raziel HaMalakh,’* (The Book of Raziel the Angel), a collection of magic spells. But experts in Leonardo’s art disagree that the number 72 is visible in the painting, and Vinceti has added that he “remains open to other interpretations.”

Leonardo may have been aware of certain trends in Jewish mysticism through books by Christian Kabbalists and Renaissance writers who knew Hebrew, but this is uncertain too.

Then there are theories that the artist himself was Jewish. In October 2000, Italian media announced that Mario Braschi, a historian from Pistoia, central Italy, claimed that Leonardo’s mother Caterina may have been a Russian Jewish slave imported to Italy as a laborer.

Since documents are lacking to prove such allegations, they remain guesswork. Just like the anti-Semitic conspiracy theory spread by the right wing “Action Française” newspaper in 1911 after the Mona Lisa was stolen from the Louvre. Based on no evidence, “Action Française” suggested that the theft must be a “Jewish plot.”

As it happened, the guilty party turned out to be an Italian Catholic house painter.

Far more certain is the centuries-long worship of Leonardo’s all-embracing intelligence and achievement by Jewish devotees. Among them was Gustavo Uzielli (1839-1911) a 19th century Italian geologist who founded a Leonardo Museum and library dedicated to the painter.

In Victorian England, the Mona Lisa’s sobriety corresponded to some Jewish sensibilities, like those of the novelist Amy Levy (1861–1889). The critic E.K. Chambers diagnosed melancholia in a photo of Amy Levy, that he found reminiscent of the Mona Lisa, adding: “Leonardo’s ironically named La Gioconda… is curiously at home among the women of our own generation.”

Excavating even more unconscious negativity in Leonardo’s work, Sigmund Freud praised a previous writer, Walter Pater, for noticing that Mona Lisa’s smile has a “double meaning… the promise of unbounded tenderness and at the same time sinister menace.”

This tender-threatening grin was not that of a Yiddishe momme, the English Jewish historian Donald Sassoon reminds us, citing a 1987 play by Wolf Mankowitz in which Freud purportedly suggests: “The Mona Lisa is essentially a Christian mother. Jewish mothers are distinctly different.”

A potentially Jewish Mona Lisa was a laughing matter for Dr. Irving Lissoos, a South African Jewish surgeon and joke compiler who suggested in the Chanukah 2008 issue of “Jewish Affairs” that had La Gioconda’s mother been Jewish: she would have noodged: “After all the money we spent on the orthodontist, that’s the biggest smile you can give us?”

More seriously, other Jews have had reservations about “La Gioconda.” The Brooklyn-born artist and writer Avram Finkelstein recalled “how unmoved [he] was seeing the Mona Lisa on loan at the Metropolitan Museum” at age 11.

Finkelstein may have instinctively rejected a certain ideal repose in the painting, also targeted by Emmanuel Levinas, the French Jewish philosopher of Lithuanian origin, who wrote:

“What is immoral in the Mona Lisa would be… her perfection in a world of suffering and evil and in the conflict playing itself out in our midst.”

As the Holocaust historian Dorota Glowacka has pointed out, Levinas might have opposed the painting’s ethically neutral superiority in a flawed world.

Yet what left Levinas and Finkelstein unstirred was a source of empathy related to Yiddishkeit for other spectators. One such was the American Jewish screenwriter Garson Kanin, director of the original 1955 Broadway production of the play “The Diary of Anne Frank.”

Kanin wrote in Newsweek in June 1979 that Anne Frank’s “bright, sweet, smiling little Jewish face – an admixture of humour and tragedy” reminded him of “the Mona Lisa (which she strangely resembles).”

Some writers have dismissed this equating of mysterious smiles as inapposite or crass showbiz sentimentality; after all, the New York Daily News reviewed “The Diary of Anne Frank” in October 1955 by comparing the heroine to Little Orphan Annie, not “La Gioconda.”

Yet in a 1996 study, Rolf Wolfswinkel, a University of Cape Town literary scholar and Dick van Galen Last, Chief Librarian at the Netherlands State Institute for War Documentation, likewise asserted: “It is no exaggeration to say that [Anne Frank’s] face with the sad shy smile is one of the icons of this century, a present-day Mona Lisa.”

This cozy, and explicitly Jewish, identification with “La Gioconda” is echoed in “The Passing of Bubbeleh,” a 2010 short story by William D. Kaufman, a US writer of Lithuanian and Ukrainian Jewish origin. It tells of a pet guinea pig whose face, according to the narrator’s wife, smiled “with the eyes like Mona Lisa.” Poignantly, with time Bubbeleh’s “no longer smiled like the Mona Lisa” as she aged.

In a comparable usage, the American Jewish illustrator Maurice Sendak’s “Higglety Pigglety Pop!,” (1967) about the fictional adventures of his pet dog Jennie, juxtaposes the beloved canine with the eternally famous Mona Lisa as a sign of Sendak’s enduring devotion to his pet.

Another invocation of La Gioconda in a Jewish context is by the historian Gil Troy, whose preface to “The Zionist Ideas,” a 2018 successor to Arthur Hertzberg’s “The Zionist Idea” (1959) confesses: “To some academics and activists, Hertzberg’s tome was such a foundational work that any update is like digitizing the Mona Lisa…”

Yet rather than striving to evoke Leonardo in Jewish terms, it may be more rewarding instead to celebrate a mosaic universally known as the Mona Lisa of the Galilee. Uncovered in 1987 in the city of Zippori in the Lower Galilee region of northern Israel, this mosaic is part of a villa built over 1700 years ago. It is arguably a more captivating, alluring, and deliberately sensual portrait than Leonardo’s of “La Gioconda.”