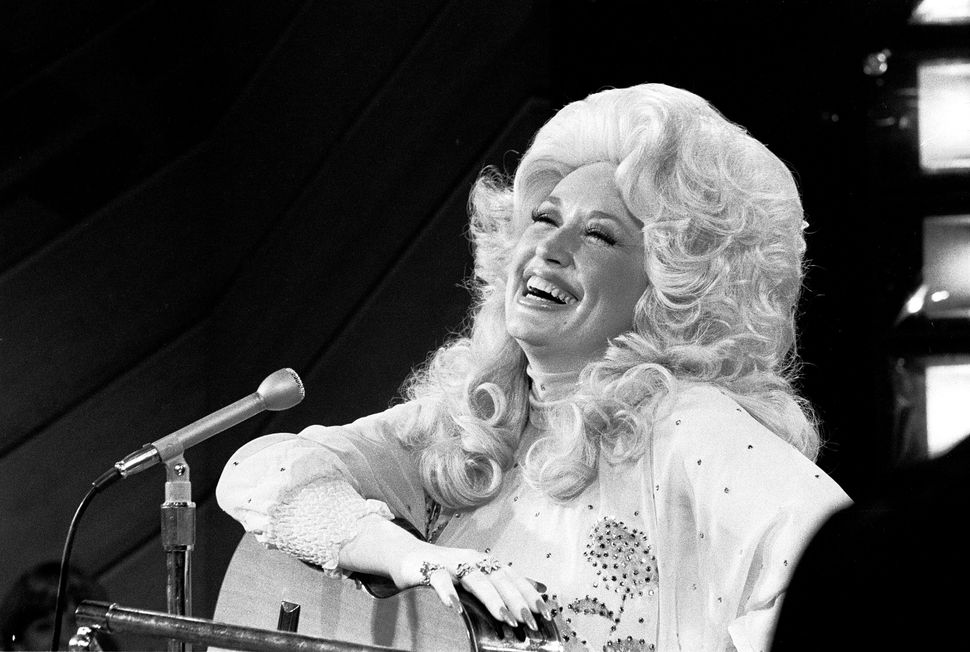 Dolly Parton has been back in the news lately — not that she’s ever out of it for long — in large part due to her $1 million donation last spring to the Vanderbilt University Medical Center, which worked with the drugmaker Moderna to develop a coronavirus vaccine. News of her medical philanthropy, which will hopefully play a role in saving millions of the world’s inhabitants from a modern-day plague, comes on the heels of a slew of new Dolly Parton projects, including a memoir, “Dolly Parton, Songteller: My Life in Lyrics” (Chronicle Books); a star-studded Christmas album, “A Holly Dolly Christmas”; and a Netflix holiday movie, “Christmas on the Square,” for which she wrote the music and in which she is typecast playing an angel.

It’s no surprise that a few weeks back, New York Magazine dubbed Parton “the reigning savior of Christmas and 2020.” Even President Obama recently confessed to late-night TV host Stephen Colbert that one of his greatest mistakes in office was not awarding Parton a Presidential Medal of Freedom. “That was a screw-up,” said Obama. “I’m surprised. I think I assumed that she had already got one, and that was incorrect.” Obama added that he would nudge his pal Joe to rectify his oversight.

In a “By the Book” interview, Parton recently told The New York Times that a copy of the Bible is always on her nightstand, next to a “daily devotional book.” In “Songteller,” Parton explains, “I’m not that religious, but I’m very, very spiritual. I grew up in very religious surroundings. I grew up with a Bible background, and I’m glad I did.”

Parton’s knowledge of the Jewish Bible is evident in several of her most beloved songs, including “Coat of Many Colors” and “The Master’s Hand.” The song “Coat of Many Colors” is based on Parton’s own childhood growing up in relative poverty and draws upon the story of the biblical Joseph. Parton sings, “As she [her mother] sewed, she told a story from the Bible she had read / About a coat of many colors Joseph wore….”

In “Songteller,” Parton recounts, “My mom made me this little coat. In order to make me proud of that little coat, I know now, she told me the story about Joseph from the Bible and his coat of many colors. So I thought, ‘Well, if it’s from the Bible, and Joseph was an important person, it has to be very special and important.’ Then when I went to school, the kids did not see that. They just made fun of my little coat. I had seen so much more in that coat than what Mama had sewn, things sewn into my body, my soul, my everything. Mama had made it and told the story and made it all seem so real. It was so mind-warping and heart-shattering to me when they made fun of it. In my mind, I thought I looked just like Joseph. But the kids didn’t, and it crushed me.”

Her song “The Master’s Hand,” written in 1971, displays Parton’s deep immersion not only in the Five Books of Moses but also in the Writings — specifically, the Book of Daniel. The song begins by recounting the familiar story of Noah thusly:

In the days before the flood

The world grew wicked and corrupt.

But Noah was a good man,

And the Lord unto him came.

Noah did, and the sky got dark,

And a great flood destroyed everything.

Except for Noah and his wife

And their three sons and their wives

And a pair of every kind of creature

Walkin’ in the land.

And the people mocked.

And they made fun.

But ol’ Noah worked ’til it was done,

’Cause he was holding to the Master’s hand.

After the song’s refrain, it continues with the lesser-known story of Shadrach, Meshach and Abednego, three figures from the Book of Daniel. The three are thrown into a “fiery furnace” after refusing to bow down to an image of Nebuchadnezzar II, the king of Babylon. Rewarded for their loyalty to God, the three miraculously survive the fire. Or, as Parton puts it:

Were marched into the fiery coals,

’Cause they would not deny the Lord,

Would not obey command.

But the Hebrew children saw no harm.

The flame was smothered by the Master’s hand….

Had no fear of the fiery coals,

’Cause they were holdin’ to the Master’s hand.

“I know my Bible stories, like the ones I mention in this song,” Parton writes in “Songteller.”

While Parton’s musical roots are in country and gospel, by the mid-1970s, with her career at a standstill, she was ready to reach a larger audience. Two Brooklyn-born Jewish men played essential roles in helping Parton make the leap from Nashville to mainstream pop stardom. Parton gives full credit to Sandy Gallin, one of the most successful talent agents from the 1970s through the 1990s, for helping her to achieve “crossover” success in music and to expand into TV, movies and even a theme park.

In 1977, Gallin convinced Parton to record a song called “Here You Come Again,” written by the Jewish husband-and-wife songwriting duo Barry Mann and Cynthia Weil. He brought in another Brooklyn native, Gary Klein, to produce the song and the album of the same name. The single cracked the Top 20 Pop Album charts and spawned her first Top 10 pop hit; the album was her first to sell millions. (Incidentally, her pop success didn’t come at the cost of her country credibility; the song sat atop the Country Singles chart for five weeks.) The song also garnered Parton her first-ever Grammy Award, for best female country vocal. Over the next few years, Klein produced a number of other hits for Parton.

But for Gallin, it didn’t end there. He convinced Parton to open the “Dollywood” theme park in Tennessee, and the two co-founded a production company, Sandollar, among whose many successes were the Steve Martin film “Father of the Bride” and the hit TV series “Buffy the Vampire Slayer.” The producers won an Academy Award in 1990 for their AIDS documentary, “Common Threads: Stories from the Quilt.” Gallin also produced the Parton-starring movies “Rhinestone” and “Straight Talk.” Parton commemorated her friendship and loyalty to Gallin by writing “Sandy’s Song,” sung to the tune of “Greensleeves.”

In “Songteller,” Parton writes of Gallin, “We were so close and our relationship was so loving. We were from two completely different worlds, but we just clicked, somehow. He was just one of those friends that you find who you just know are going to be your friend forever.” For a time, the two even shared an apartment on Manhattan’s Upper East Side. After Gallin died in 2017, Parton told an interviewer, “Nobody could quite get how the Christian Southern girl and the New York Jewish boy could have so much in common. But it was real.”

Seth Rogovoy is a contributing editor at the Forward. He often mines pop culture for its lesser-known Jewish stories.