This Hanukkah, we have become ‘those kinds of Jews’ 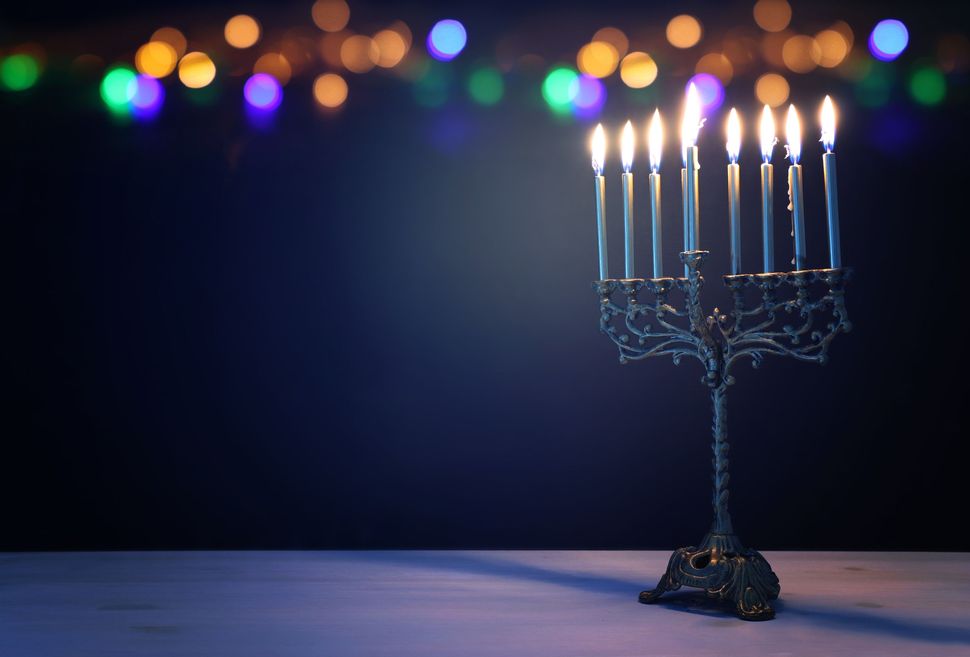 Dec. 8, 2020. My mother, having done her usual migration to Florida, texts me while I’m walking the dog.

“How many are you expecting for Hanukkah?” she asks.

I text back even though my sarcasm can’t be heard through my typing: “How many people? It’s 2020, Mom. It’s just us.”

And then I think about it and feel terrible. My mom was never really into the Festival of Lights, but this year is different from all other years, and missing her is painful. I quickly text back: “I wish you were here.”

“Me too,” she he writes. And then she adds, “I can’t find the menorah emoji!”

I send a string of them back to her and reflect on Hanukkahs before 2020.

1) It’s Hanukkah circa 1982. I’m newly into double digits and have it in my head that this year – the year of “Thriller” and Princess Diana giving birth to William – is the year my family will finally get it together for Eight Nights of Lights.

“We’re not those kinds of Jews,” my mother said to me while my little brother tried to moonwalk in socks on the hardwood floor. We were the kind of Jews who lived in an old farmhouse, the kind who had a flock of Dorset sheep.

“But we own a menorah!” I held on to the shamash, the helper candle, and gestured with the rest of the tarnished silver. Each of the other seven branches had the remains of attempts at Hanukkahs gone by, melted bits of rainbow-colored wax no one had bothered to clean out. My mother smirked. “Everyone owns a menorah. Doesn’t mean we need to use it.” 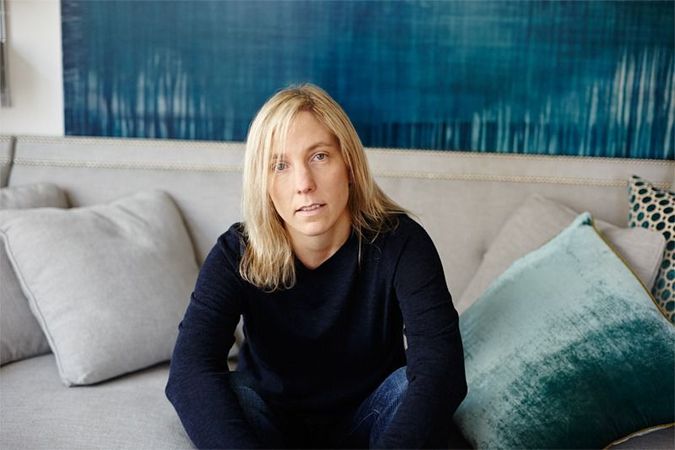 Hanukkah Author: Emily Franklin’s work has been published or is forthcoming in the New York Times, Guernica, The Cincinnati Review, Shenandoah, and New Ohio Review, among other places as well as featured on National Public Radio and long-listed for the London Sunday Times Short Story Award, and named notable by the Association of Jewish Libraries. Image by Lou Rouse

The truth was that we were Christmas tree Jews. My father’s Jewish, atheist grandparents had a place a couple of miles up a dirt road and we would drive to the woods there each December and cut down a pine tree.

We were the kind of Jews who owned our own tools. We used saws and rope and schlepped the tree back to Boston and erected it at my grandparents’ home complete with homemade looped chains made of red and green construction paper and a hand-glittered star for the top. “You are so lucky,” my friend Claire told me. “You get both.” But we didn’t. We got Christmas, which even my mother’s parents – far more conservative Jews – put up with. “It’s an American holiday,” my father’s parents said each year as we stared up at the lighted tree. “And we’re Americans now.” So no menorah.

2) It’s 1979 and my older brother and I are about to come to blows over the Hanukkah grab bag. We’re with a group of other families who each brought a wrapped gift to place in the oversized black trash bag that will be fished out by grabby small hands. My brother and I reach for the same thing at the same time – it’s flat and square. Obviously, a record. I gently ease the blue and silver paper from the parcel – my brother intervenes, grabbing it.

He won’t let go and I don’t want to break the album so I let him have it, only to reach into the bag again and pull out another record. “Ha,” I say and display my treasure. The Village People and I dance a YMCA to my victory.

3) I stand with Grandma Ruth, both of us elbow deep in shredded potato mush. “What you have to do,” she says, her blue eyes shining, “Is get rid of all the starch. Otherwise, it won’t be crispy. And who wants a soggy latke?”

Hanukkah is early this year, early enough we’ve combined it with Thanksgiving, which seems to justify the effort. Thanksgivikah. It wasn’t that my parents were against the holiday, but with three kids, two fulltime jobs, and the oversized Christmas looming like a beacon of WASP-dom, Chanukah didn’t stand a chance. But this year – it happened. It was a miracle. But a small one. “Add a little onion. Now,” my grandmother said, “Add a little flour. Don’t tell Grandpa Phil. He thinks it’s like his mother made. It isn’t. It’s like I make.”

Together, we form oversized potato pancakes, fry them in hot vegetable oil, and serve with applesauce and sour cream because, as Grandma Ruth says, “Everyone needs choices.”

4) 1993. College. December. Jess lights a menorah to celebrate the first night of Hanukkah and brings her first girlfriend to our small ceremony which, because it involves candles, is against dorm rules. We sing the prayers and I think about Grandpa Phil and how he would be happy to know I’m singing Hebrew as snow falls outside. But he is gone and Grandma Ruth is alone. My mom is fatherless. I wonder if she thinks about lighting her menorah. If she even knows where it is.

5) I’m 26. About to get married to Adam. We are deeply in love and our families are flying from all parts of the globe for our December ceremony, trying not to panic because we’ve known each other for three months. Adam and I are living at my grandparent’s place, sitting in the living room right where the huge tree normally sits. The location of so much childhood happiness, leaning with my brothers over the railing, hoping to catch a glimpse of grownups filling our stockings (oh, yes, we were the kind of Jews who had red and white felt stockings).

“I don’t think I want a Christmas tree in our house,” my future husband says. In all our talks of wanting kids, in all my imaginings of what an adult life – career, family, home — might bring, I had never considered this. Instantly, it feels like a loss, but when Adam and I sit on my grandparent’s Boston stoop, and he tells me about his Hanukkahs and I ponder the absence of a tree, I actually feel OK.

“I think we’re going to have a menorah,” I tell my grandparents. I expect confusion, or tears, or their insistent gazes as they ask, “Are you sure?” the same way they asked when I told them about our upcoming wedding. But instead, they shrug. “OK.”

“We had a lot of Christmases here,” Papa says, his deep voice echoing in the space where the tree used to go. “Now we’ll move on to whatever you want to do next.”

6) 2006. I’m pregnant – again – and my parents and in-laws and grandparents are all happy. Not only because of another baby, but because we are all together, me and Adam and our three little kids, the youngest who made our new menorah, a series of metal bolts glued onto a plank of wood he painted in rainbow colors. We sing the blessings and dig into the pile of latkes I’ve made. “Nice and crispy,” my picky father-in-law says. I don’t tell him about the secret flour Grandma Ruth taught me to add.

7) A few years later, our four kids are under 8 years old, I have a new book contract, and with a host of friends and parents and neighbors around 250 latkes in various stages in front of me – some raw, some raw on one side, some perfectly crisp and hot, others being consumed as snow piles around our house. We have lived here longer than I lived anywhere else. From a nomadic childhood and early adulthood, we have had all the holidays here, and this Hanukkah goes down in history as “the one where everyone got stranded.” We stain our jeans with oily fingers, sing and dip into applesauce and sour cream or both, because, even in a blizzard my daughter says, everyone should have choices.

8) Now. In the Before Time, we had people over. We made latkes and sang in the cozy closeness of our warm home. Now, having made peace with being the kind of Jews who have menorahs and light them, the kind of Jews who have a vast and diverse group of friends of different cultures, races, genders, religions and experiences, we have to readjust. We hang string lights from trees outside, set up folding chairs, rake leaves and invest in waterproof blankets, a fire pit, a hard-to-come-by heat lamp. We will have just family over and only outside and 10 feet apart for eating latkes that will be crispy, but perhaps not perfectly hot, because we live in New England and it will be winter. But we will be together.

This Hanukkah, we have become ‘those kinds of Jews’