How ‘Big Mouth’ became bigger than me 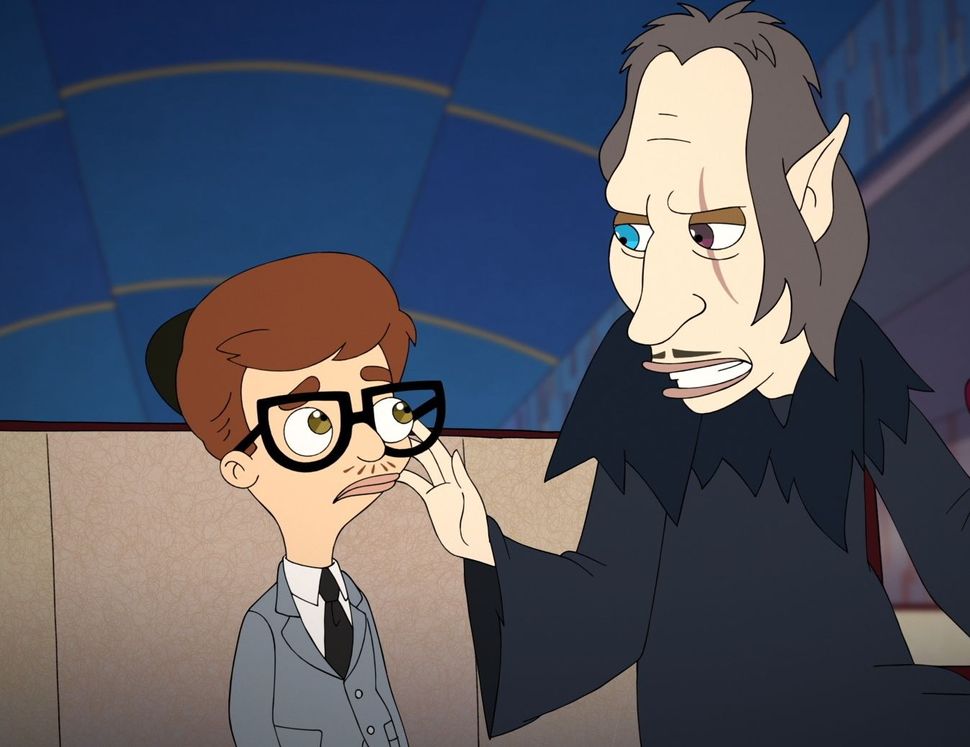 When we last left our heroes, a sinkhole had swallowed much of the state of Florida. They escaped unscathed, parting a tidal wave with the help of a Menopause Banshee voiced by Carol Kane. Of course it was “Big Mouth” — and a Passover episode.

The animated series, which debuted its fourth season on Netflix Dec. 4, has long had an affinity for this type of storytelling, marrying paranormal conceits with reproductive change and a dash of Yiddishkeit. Grounding all this insanity is a homegrown specificity that begins where I myself did: the Jewish milieu of Westchester County, New York.

Two of the show’s creators, Nick Kroll and Andrew Goldberg — who share first names with the main characters — went to the Solomon Schechter School of Westchester in White Plains, a 30-minute drive from my own public school in Millwood. The fictional Westchester town of Bridgeton in “Big Mouth” looks a lot like the one where I grew up, and its schoolyard dynamics are probably closer to that of my youth than that of either Kroll or Goldberg.

Bridgeton Middle School is secular, like my own Seven Bridges Middle School, but is unmistakably Jewish in its character — the kind of place where “JAP” was a known, self-effacing acronym — not a slur — and one’s social calendar and status was built around b’nai mitzvah invitations.

I would appear to be the ideal viewer for “Big Mouth;” the answer to its constant question of a target audience with its puzzling blend of important life lessons, young characters and TV-MA-caliber lewdness. I was, for a while. Now, in this latest season, I feel too close to the material and I’m ready at last to let go.

Yes, I still smile at the nods to Rye Playland — a place of pilgrimage for most Westchester tweens, replete with myths of decapitations, drownings and impending rollercoaster collapse. But I also quibble at the show’s design of the Metro-North trains that idle at non-terminal stations waiting to admit passengers. (Animators, I, a former weekly ticket holder, am free for consultation next time.)

These nitpicks come in the same episode, “The Funeral,” which should have been the successor to last season’s celebrated Pesach special, “Florida.”

Cut to the arrival of Uncle Skip (David Cross), who chose to drive Zayde’s body from the condo in Florida up to Westchester in the back of a Jeep Rambler to save money on airfare. Yet, for someone so thrifty, Skip’s choice of casket is an odd one: a polished wood and metal affair, no doubt a bit pricier than the traditional Jewish option of a simple pine box.

Later at the service at Temple Beth Amphetamine (yes), we see that Zayde was buried in a suit and was left in a side room in an open casket, not, it would seem, for identification purposes. Clearly this isn’t a family hung up on halacha. That’s fine, but I would think the creators would know enough not to present viewers with the image that follows.

Back in her hometown for the funeral, Jessi (Jessi Klein) hallucinates that the rabbi transforms into a kippah- and tallit-wearing “anxiety mosquito,” that peppers her with agita before departing with a hearty “Shabbat Shalom.” In the past, Kroll and Goldberg have revealed an awareness of the antisemitic sentiment their show generates online — and skewered it to great effect.

This makes it all the more baffling that they would feed these trolls an animation of a parasitic insect in traditional Jewish garb. Thankfully, I’ve yet to see any memes.

And yet, while this season — with its excursions to the near future and expansion of an already unwieldy menagerie of Milnesque avatars of distress and mania — fell short for me, it provides in other, more urgent ways. Ways that don’t cater so explicitly to me.

A new character, Natalie (Josie Totah), is perhaps the highwater mark for trans representation in adult animation, voiced and written by trans women.

I wondered how the show would handle a much-reported shift in the voiceover cast, with white Jewish actress Jenny Slate stepping down from her role as the biracial Missy Foreman-Greenwald. The result of that transition gave the character the season’s best arc. On a trip to Atlanta, Missy grapples with the expectations of the Black side of her family and the discomfort of her white mom after she rejects Tom’s of Maine all-in-one shampoo, conditioner, body wash — and paint-stripper, probably — to braid her hair.

Following some fourth-wall-breaking from Slate over the inappropriateness of her casting (a far better version of that “Simpsons” gaffe) and a fantastic musical number about code switching, Ayo Edebiri makes her debut as the new Missy a funhouse mirror sequence of resolved, multifarious identity that is at once moving and insanely bizarre.

I can’t split hairs with these moments, as they don’t speak to my experience. But judging by some of the online response, they seem to be resonating with the people they should.

Since 2017, I’ve wondered who this show was for before deciding it was for me — a white Jew from Westchester with a sophomoric sense of humor. This time around, “Big Mouth” expanded its universe beyond my small quarter of the world. I can’t say it’s not a welcome change.

How ‘Big Mouth’ became bigger than me