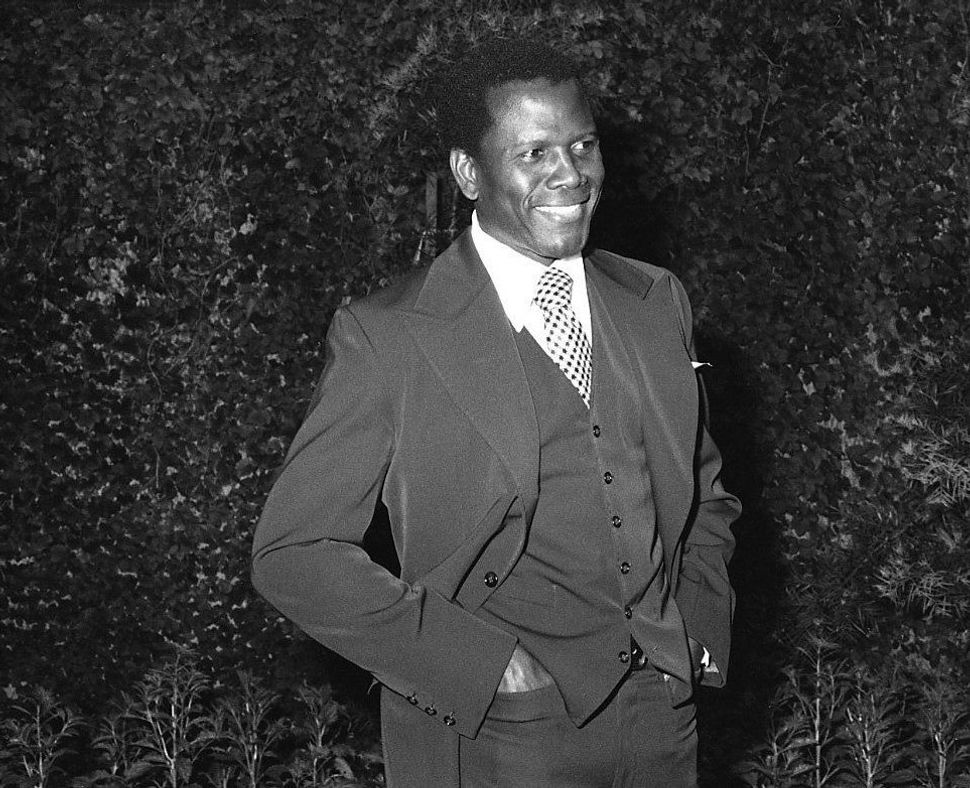 It is a tribute to the civil rights movement and its recent incarnation as Black Lives Matter that, according to recent polls, a majority of white Americans believe that Black people are not treated fairly in our society, not only by police but also by other institutions. In fact, only 10% of American voters believe that racism is “not a problem at all.” Among those who hold that opinion, 91 percent voted for Donald Trump.

If you want to understand know how people can be blinded by hatred, “No Way Out,” a forgotten gem of a film from 1950, now available on YouTube and DVD, offers some valuable clues.

This was the 22-year old Sidney Poitier’s first film. He eventually became America’s first Black movie star, but “No Way Out” may be his most hard-hitting movie about racism. It was one of a handful of post-World War 2 films – including “Gentlemen’s Agreement” (1947), “Crossfire” (1947), “Pinky” (1949), “Home of the Brave” (1949), “Intruder in the Dust” (1949), and “Storm Warning” (1950) — that dealt directly with the subject of American racism and anti-semitism, before the repressive McCarthy era made studios reluctant to address controversial topics.

In “No Way Out,” Richard Widmark portrays Ray Biddle, a petty crook who, along with his brother Johnny, is brought by police to a public hospital with bullet wounds from a botched robbery. Biddle is a vicious racist who directs his venom at Luther Brooks, a newly-hired doctor at the hospital played by Poitier. Brooks has to deal with a great deal of both overt and subtle racism. For example, Biddle initially mistakes Brooks for a janitor. Once it is revealed that he’s a doctor, Biddle refuses to allow him to treat the gunshot wound. When his brother dies of a previously undiagnosed brain tumor, Biddle blames Brooks and unleashes a barrage of racist epithets, including the N-word.

Fueled by his out-of-control racism, Biddle threatens to “get” his brother’s “black killer.” From his hospital room, he gets the word out to his white friends and organizes a mob to attack the black part of the city, triggering a race riot. The victims, black and white, are brought to the hospital. While Brooks is tending to a white rioter, a woman orders him to take his “black hands” off her son and spits in his face.

It isn’t hard to think of Charlottesville and to imagine that Biddle and his buddies would be part of today’s white supremacist “alt-right”.

Joseph Mankiewicz, a staunch progressive and union activist (he was president of the Screen Directors Guild), directed and coauthored the film, which was released five years before the 1955 Montgomery bus boycott triggered the modern civil rights movement.

Mankiewicz told the Los Angeles Daily News that he wanted the film to deal with the “blood and guts” of “Negro hating.” Twentieth Century Fox studio head Darryl F. Zanuck said he hoped that film would be “powerful propaganda against intolerance.”

“We want to tell a story of the Negro in a white man’s everyday world, rather than the Negro in the Negro’s world. We are going to show the kind of hate the Negro runs up against in his daily life, how he is afraid to walk on certain streets,” Zanuck said.

The film’s Black characters were not the typical Hollywood stereotypes. Dr. Brooks and his family (including his mother, wife, brother and sister-in-law) are portrayed as play-by-the-rules strivers, working hard to move into the middle class. The remarkable couple of Ossie Davis (who, in his first film role, plays Brooks’ brother) and Ruby Dee (who portrays Davis’ wife) appear in the first of many movies together, but don’t get screen credit. The hospital elevator operator (played by Dots Johnson) and the chief of medicine’s housekeeper (played by Amanda Randolph) are hard-working and sympathetic characters who face daily indignities because of their race.

In contrast, Biddle is from Beaver Canal, a white low-income district where he and his friends survive by their wits as low-level hoodlums and hustlers. Unlike blue-collar factory or post office workers, they have neither steady jobs nor a labor union to provide them with self-respect and a sense of their own power.

Rather than take responsibility for his own fate, or direct his frustrations and anger at powerful corporate and political elites for ignoring the awful conditions in his community, however, Biddle engages in classic scapegoating. He feels that Black people get special treatment (this was in 1950, long before affirmative action), while people like him are looked down upon and left behind. “To them, I’m just garbage,” says Biddle.

Mankiewicz was clearly influenced by then-popular theories that attributed racism and antisemitism to an emotional disorder, what some at the time called an “authoritarian personality.”

The focus on white racism as a psychological problem obscures the systemic reality of racial injustice. The only hint of institutional racism is in a scene in which the hospital director worries that his budget, which depends on the whims of elected officials, could be jeopardized by a controversy surrounding the hospital’s first and only black doctor.

The miserable conditions in Beaver Canal provide a subtle class dimension to the film. Although neither the Widmark character nor his white friends are depicted sympathetically, viewers can see them, too, as wounded victims of an unfair society.

The most interesting white character in the film is played by Linda Darnell as Edie Johnson, the tormented former wife of the dead Johnny Biddle. She, too, she grew up in Beaver Canal. She lives in a tiny apartment, hates her low-wage waitress job, and thinks the world handed her a bad deal in life. Biddle persuades her to seek revenge on the Black doctor, and Black people in general, for Johnny’s death.

She initially helps Biddle organized the white mob, but then has a crisis of conscience, triggered by the help given her by a warm-hearted Black woman (played by Amanda Randolph) who nurses her back to health after she falls into a deep despair about her life and goes on a drunken bender. When she learns that Biddle, who has escaped from the hospital, is going to kill Brooks, she intervenes and saves the Black doctor’s life. “No Way Out” suggests that it possible for white racists to recognize and overcome their bigotry and find redemption.

“No Way Out” was controversial at the time. Conservative groups like the Catholic Legion of Decency pressured cities to ban the film. The studio executives knew that “No Way Out” would not be shown in Southern theaters. But they were angered that it was also banned in Chicago because, according to a police official, it “might cause more racial unrest than we have now,” ignoring the blatant violence depicted in the popular crime movies and Westerns at the time.

Walter White, the head of the NAACP, sent a telegram to Chicago’s mayor opposing the ban, observing that “This picture is the most forthright and courageous picturization of the evil of race prejudice which has yet been made… instead of inciting to riot as police censor claims [it] will do enormous good in the exactly opposite direction.” The mayor agreed to lift the ban, but only after the filmmakers agreed to cut scenes of blacks and whites preparing for the race riot. Several other cities and states followed Chicago’s example, requiring the studio to excise several scenes before it could be shown in theaters.

But conservatives weren’t the only ones who objected to aspects of the film. The board of directors of the Negro Newspaper Publishers Association — whose papers, like the Chicago Defender and Pittsburgh Courier, had a big influence among Black Americans — adopted a resolution to protest ”the excessive employment of these [racial] epithets.” “Some of these terms of opprobrium have never been heard or used by millions of Americans of both races,” the statement cautioned, and “should not be spoken in decent society.” The statement anticipates recent controversies over the use of the N-word and other racist phrases.

Although “No Way Out” didn’t do very well at the box office, most critics liked the film, which garnered an Oscar nomination for Mankiewicz and co-writer Lesser Samuels for best screenplay.

The same year that “No Way Out” was released, the incomparable Ruby Dee appeared in another film, “The Jackie Robinson Story,” playing Robinson’s wife Rachel. (Robinson played himself).

Produced at the height of the Cold War, “The Jackie Robinson Story” celebrated Robinson’s feat of breaking baseball’s color barrier with the Brooklyn Dodgers in 1947 as evidence that America was a land of opportunity where anyone could succeed if he had the talent and will. The movie opens with the narrator saying, “This is a story of a boy and his dream. But more than that, it’s a story of an American boy and a dream that is truly American.”

Yet, ironically, Robinson’s real-life experiences — physical assaults by players and fans, racist taunts on and off the field — was very much like that of the Black doctor that Poitier portrays in “No Way Out.” Unlike “The Jackie Robinson Story,” “No Way Out” is a direct confrontation with white racism. “No Way Out” was designed to make white viewers uncomfortable and to raise their awareness about racial discrimination. It helped lay the groundwork for the civil rights movement, which would force white Americans to decide what side they were on in the struggle for racial justice.

In the 70 years since “No Way Out” was released, Americans have become more aware of pervasive racism and more willing to support policies that address it. But a few weeks ago, 58 percent of white voters – including 61 percent of white men – voted for a white supremacist for president. Most of them are not virulent racists like Ray Biddle (or Donald Trump), but that’s cold comfort to Black Americans, who must wonder if there’s “No Way Out” of the reality of racism.

Peter Dreier is the E.P. Clapp Distinguished professor of Politics at Occidental College. His books include the forthcoming “Baseball Rebels: The Reformers and Radicals Who Shook Up the Game and Changed America.”