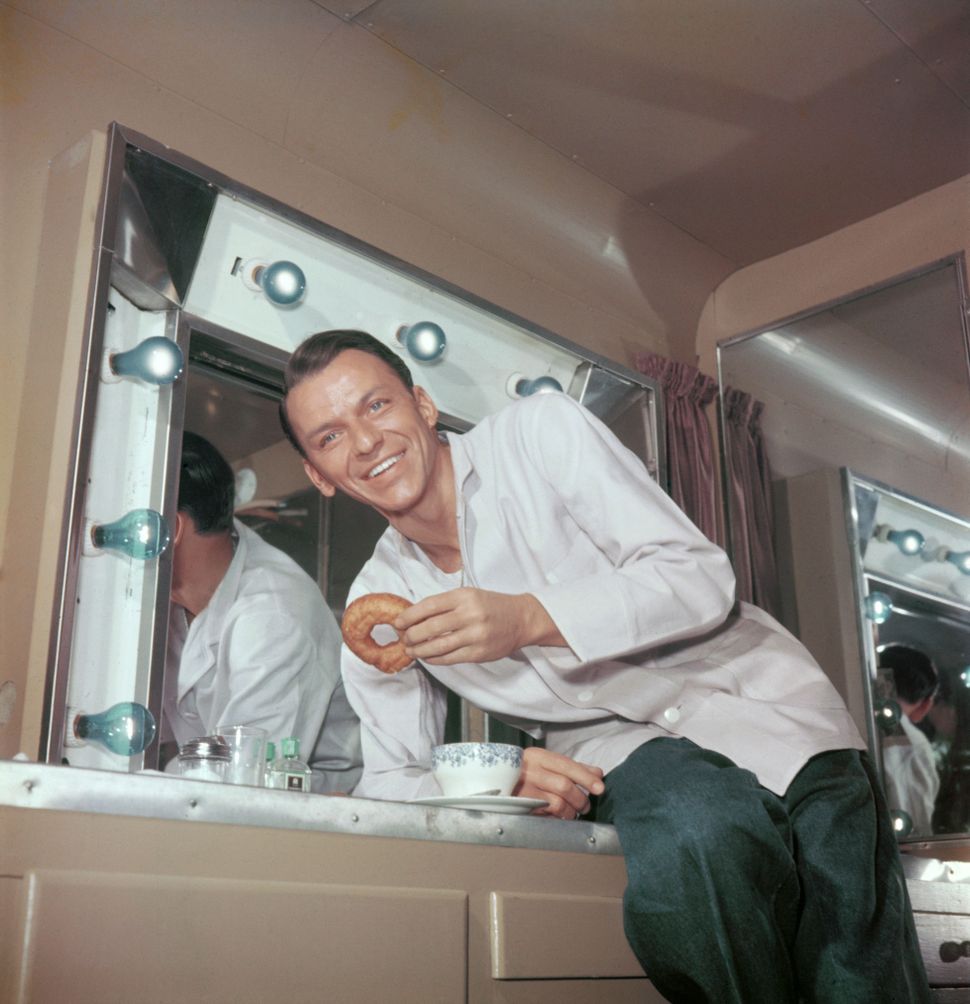 Frank Sinatra was arguably the most famous Italian-American Catholic of the 20th century. The skinny kid from Hoboken, N.J. — who was born 105 years ago, Dec. 12, 1915 — grew up to become synonymous with the so-called Great American Songbook. That songbook, however, was largely written by Jewish-Americans, including immigrants and children of immigrants. And while the songwriters for the most part expressly tried to leave behind the accents and inflections of the Yiddish-speaking world from whence they came, the songs nonetheless often betrayed the influence of Jewish Eastern Europe in outlook and emotional temperament. Sinatra, as it turned out, just happened to become the greatest interpreter of that body of work.

Sinatra was one of the best-selling recording artists of all time, having sold more than 150 million records worldwide. That same figure has been bandied about this past week in reference to Bob Dylan, in the wake of the sale of his publishing rights to Universal Music Publishing Group for an undisclosed figure thought to be $400 million. While Sinatra never recorded a Dylan tune, he was apparently intimately familiar with the singer’s catalog. At an 80th birthday tribute to Sinatra in 1995, Dylan performed his song “Restless Farewell,” an obscurity for which even Dylan fanatics would be hard-pressed to hum a few bars. Dylan later revealed that it was Ol’ Blue Eyes himself who asked the future Nobel Prize-winner to perform that number.

Speaking of blue eyes, Sinatra and Bob Dylan — whose eyes Joan Baez once described in song as “bluer than robin’s eggs” — there is an oft-told story of the two singers finding themselves alone outside on a Hollywood balcony one night, seeking refuge from the chaos and din of a music-industry party going on inside. Sinatra supposedly pointed to the stairs and said, “‘You and me, pal, we got blue eyes, we’re from up there… These other bums are from down here.” Significantly, Dylan recorded several albums of pre-rock pop songs associated with Sinatra in the 2010s, in which his vocal interpretations cut right to the heart of the longing and poignancy buried within the melodies and lyrics.

Sinatra’s first number-one hit, “I’ll Never Smile Again,” recorded with Tommy Dorsey and His Orchestra, was written by Jewish-Canadian songwriter Ruth Lowe and perched atop the pop charts for 12 weeks. “The Voice of Frank Sinatra,” his very first studio album as a soloist, included “Someone to Watch Over Me” by George and Ira Gershwin. His very Jewish second album, “Songs by Sinatra,” was chock full of songs written and composed by the likes of Irving Berlin, the Gershwins, Jerome Kern and Oscar Hammerstein II, and Harold Arlen and Yip Harburg.

Sammy Cahn, who co-wrote the title tracks to Sinatra albums including “Come Fly with Me” and “Frank Sinatra Sings for Only the Lonely,” was one of Sinatra’s go-to songwriters. Sinatra once told Cahn — who co-wrote with Jule Styne the songs for “Anchors Aweigh,” a movie musical and starring vehicle for Sinatra, “If you’re not there Monday, I’m not there Monday.” Sinatra recorded 87 songs co-written by Cahn over the course of his career. Other favorite songwriters included Yip Harburg and Burton Levy (born Morris Hyman Kushner), who wrote “Old Devil Moon,” Sammy Fain (“I’ll Be Seeing You”), and Richard Rodgers and Lorenz Hart, who wrote the songs for “Pal Joey,” a Broadway musical starring Sinatra in the Hollywood version. Sinatra also sang numbers by Leonard Bernstein and Betty Comden and Adolph Green in the movie musical “On the Town” and by Frank Loesser in “Guys and Dolls.”

Later in his career, Sinatra championed younger Jewish songwriters, with a version of Stephen Sondheim’s “Send in the Clowns” on his 1973 comeback album, “Ol’ Blue Eyes Is Back,” and “New York, New York,” the theme to the Martin Scorsese film by that name, written by the songwriting duo John Kander and Fred Ebb.

Sinatra starred in a 1963 comedy film, “Come Blow Your Horn,” based upon a Neil Simon play, in which he shared screen time with the legend of Yiddish stage and screen Molly Picon, who played his mother. Sinatra played an expatriate American pilot in the 1966 Zionist epic, “Cast a Giant Shadow,” based on the real-life exploits of Jewish-American military officer, Colonel David “Mickey” Marcus, who commanded units of the fledgling Israel Defense Forces during the 1948 Arab-Israeli War. The film starred Jewish actors including Kirk Douglas as Marcus; Luther Adler, who got his start in the Yiddish Theatre in New York City; and Israeli actor Topol, best known for his portrayal of Tevye in “Fiddler on the Roof.” The film’s poster also included such box-office draws as Yul Brynner, John Wayne and Angie Dickinson, but not even all that star power could rescue a movie that got terrible reviews.

The so-called Rat Pack, a fraternity of actors, singers, and comedians who Sinatra hung out with in Las Vegas and elsewhere during the 1960s, was headed up by Sinatra and his close friends Dean Martin and song-and-dance-man and noted convert to Judaism, Sammy Davis Jr. Other Jewish entertainers who passed in and out of the raucous group included Joey Bishop, born Joseph Abraham Gottlieb in the Bronx; Jerry Lewis, born Joseph Levitch in Newark, New Jersey; and a young Don Rickles, a Queens, New York-native (and my father’s scoutmaster), who they kept around as a kind of mascot. Every fraternity needs a mascot.

When it came time to baptize his own son, Sinatra chose his close friend Emanuel “Manny” Sacks to be his son’s godfather, but his priest refused to do the honors. Sinatra walked out of the church and found another priest to do it. “My name is Francis Emanuel Sinatra and the middle name is from [Manny] and I treasure him,” Sinatra Jr. once told an interviewer. The Philadelphia-born Sacks, who died in 1958, is famously credited with helping his friend Frank break a restrictive contract with bandleader Tommy Dorsey. You may remember a similar episode occurring in Mario Puzo’s novel, “The Godfather,” and in the movie based on the book. Probably just a coincidence.

In the week between his death May 14, 1998, and his burial, Sinatra’s body was secreted in a Jewish funeral home, while the paparazzi staked out all the Catholic funeral homes. Sinatra probably wouldn’t have minded at all. His lifelong efforts to support Jewish activism are so many that they even have their own Wikipedia page devoted to them called “Frank Sinatra and Jewish activism.” Early in his career, Sinatra appeared in a 10-minute film decrying anti-Semitism and bigotry in the wake of World War II. Sinatra sang the title song, “The House I Live In,” which was co-written by Abel Meeropol, whose anti-lynching song, “Strange Fruit,” was made famous by Billie Holiday.

Sinatra took part in early efforts to support the nascent Jewish state, lending financial support to weapons smuggling to the Haganah. Even earlier, while the European war still raged, Sinatra took part in “We Will Never Die,” a four-month, six-city dramatic pageant staged by Ben Hecht to focus public attention on the Holocaust. Sinatra would go on to perform numerous benefits for the Israel Defense Forces, was a financial supporter of Simon Wiesenthal’s Nazi-hunting efforts and funded the Frank Sinatra Student Center at the Hebrew University of Jerusalem in 1978.

Sinatra’s affinity for Jewish life, culture, and causes may trace back to a Yiddish-speaking neighbor, a Mrs. Golden, who often baby-sat him while his mother was out working. Golden spoke to young Frank in Yiddish and is said to have served him coffeecake and apples. In tribute to her, for many years Sinatra wore a mezuzah that she had given to him.

Seth Rogovoy is a contributing editor at the Forward. He often mines popular culture for little-known Jewish stories.