The dinosaur menorah started as a hobby. Here’s how it became the internet’s weirdest Judaica trend. 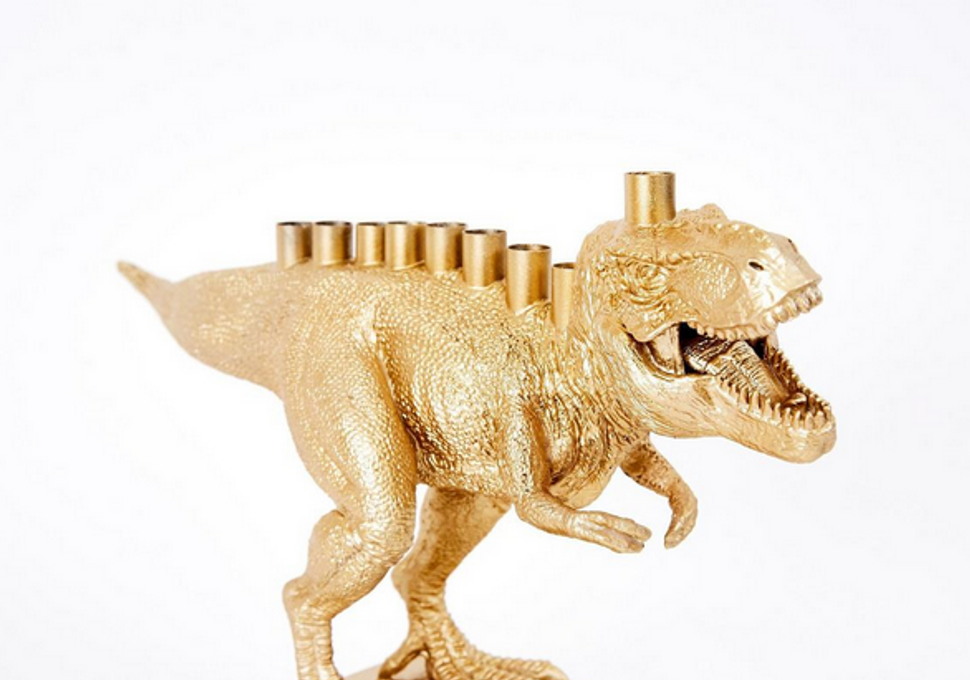 Eleven months out of the year, Benjamin Packard is a pretty normal guy.

Packard, 37, lives in Oakland, California. He enjoys a rewarding career as a “mild-mannered financial advisor who helps millennials prepare for retirement.” He’s an enthusiastic dad to two young kids.

But as Hanukkah approaches, everything changes. “Every holiday season, for about thirty days, I turn into a superhero,” Packard said. His chosen mission is a little unusual: “I answer customer service complaints from Jews all around the world.”

This might sound like a weird Jewish remake of all those made-for-TV Santa Claus movies. But it’s actually a very true story about a garage hobby that grew into an international business and now transports a very special piece of Judaica to about a thousand Jewish homes each year.

That’s because Packard is the man behind the dinosaur menorah.

If you are a millennial Jew or have one in your life, you’re probably familiar with this unique ritual object, a gold T-Rex frozen mid-lunge with nine candleholders balanced on its back. On Etsy, where the dinosaur menorah made its debut, it has achieved bestseller status. It’s also been spotted on the website of hip Judaica retailer Modern Tribe. On Instagram, the dinosaur menorah is a prop of earnest but irreverent holiday observance, posed next to luscious trays of sufganiyot and included in gift roundups by minor influencers.

In a sea of chintzy tin menorahs and mildly offensive Hanukkah t-shirts, the dinosaur menorah is a genuinely desirable Jewish novelty item. The menorah also sends a signal. Owning one demonstrates you’re committed enough to your faith to fork over $49 for a menorah. At the same time, it indicates you’re too trendy to celebrate the Festival of Lights with the bedazzled tangle of tarnished silver branches you received for your bat mitzvah. By lighting up this dinosaur’s back, you’re not just publicizing the Hanukkah miracle; you’re publicizing your status as an officially cool Jew.

Despite the recognition the dinosaur menorah has achieved, it wasn’t born in any corporate branding office. In fact, it started out in the garage of a man who described himself at various points in an interview with the Forward as a “business savant,” the “Michael Jordan of dinosaur menorahs,” an “H-list celebrity,” and a “boring and conventional” person.

Packard’s ascent as a Judaica purveyor began in 2015. He’d seen a few dinosaur-shaped menorahs online, created by Etsy seller Lisa Pierce. But at $85 apiece they were out of his price range. So his sister created a more affordable version, using glue and gold spray paint to transform one of her children’s dinosaur toys into a menorah. 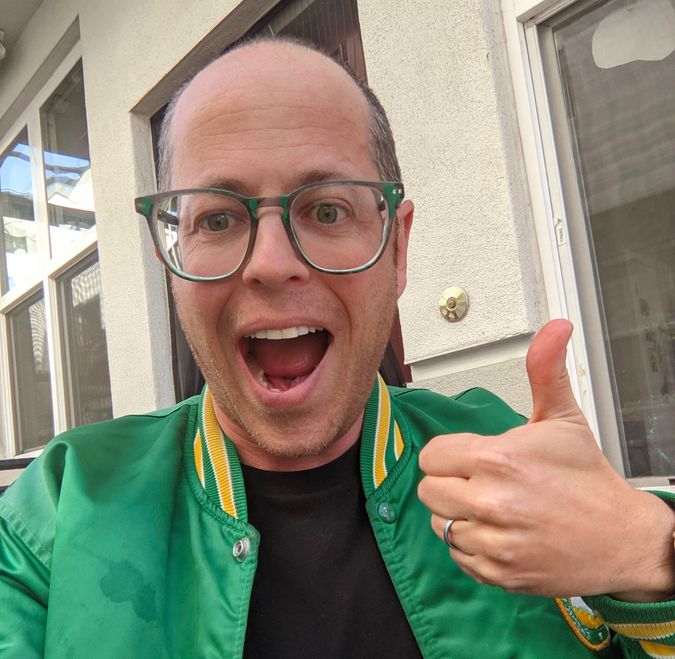 Packard loved the gift. And, stuck in a job he hated, he happened to be in need of a hobby. Imitating his sister, he bought a few plastic dinosaurs at Toys R Us, attached some candleholders, and posted them on Etsy — where buyers snapped them up.

“It looked very bootleg, and to this day I’m surprised someone bought it,” Packard said. “But it sold immediately.”

As it turned out, there was an unmet need for accessibly-priced dinosaur menorahs, and Packard devoted himself to filling it. In his first Hanukkah season on the job, he sold between 50 and 100 menorahs. The next year, ordering dinosaurs from the budget retailer Ali Baba and setting up a makeshift assembly line in his parents’ garage, he sold 300. The year after that, demand was so high that he hired someone to help him assemble the menorahs.

As Packard expanded production, he also refined his design, trying to improve quality without raising the price. He was aided by Pierce, the Etsy seller behind the first dinosaur menorahs, who he said supported his quest to make a cheaper version of her idea and even shared some craft tips. The process led to some unusual purchases. Looking for an alternative to expensive individual candleholders, he made a surprising discovery: nine-millimeter bullet casings are exactly the right size to hold a Hanukkah candle.

The result? An entire generation of dinosaur menorahs that relied heavily on used ammunition, purchased in bulk on eBay.

Three years after making his first menorah, Packard was receiving about 1,000 menorah orders each season. Unable to meet demand even with hired help, he took the logical next step: outsourcing to China.

With the help of a professional middleman, Packard brought the menorah to a family-owned workshop in Guangdong Province, whose owners created a scalable prototype and churned out thousands of gilded dinosaurs, enough to fulfill several seasons of orders.

“It was so many baby steps,” Packard said of his evolution from hobbyist to (minor) titan of (niche) industry. “Step one: Ask your sister to make one. Step two: Go to Toys R Us. It’s not like I woke up one day like, ‘I’m going to fly to China and work with an international manufacturer.’”

Once an artisan, Packard is now a supply chain manager. Instead of actually making menorahs, he spends the lead-up to Hanukkah coordinating shipping and answering emails from testy Jews, who, he says, are not “a low-maintenance people” when it comes to the timely delivery of dinosaur menorahs.

Despite the paper-pushing, the passion project still comes with some street cred. “When people at dinner parties [ask] what do I do for a living, and I’m like ‘I’m a financial advisor,’ they’re like, ‘Shut the f—k up, you’re boring, don’t talk to me,’” Packard said. “But if I mention the dinosaur menorah, I am bombarded with questions. And I will steal attention from everyone at the table.”

Still, Packard admitted the dinosaur menorah’s days are probably numbered. Once he exhausts the supply purchased from China, he plans to retire from his role of “dinosaur menorah iconoclast.” After five hectic Hanukkah seasons, he wants to devote the holidays to his children, who at one and three years old are too young to take an interest in supply chain management — although they do enjoy dropping their own dinosaur menorah on the floor.

One day, he hopes the dinosaur menorah will provide them with an enviable family legend. “I’m excited for my kids to stumble upon it in the attic covered with dust,” he said. “And then I’ll tell them the story.”

The dinosaur menorah started as a hobby. Here’s how it became the internet’s weirdest Judaica trend.