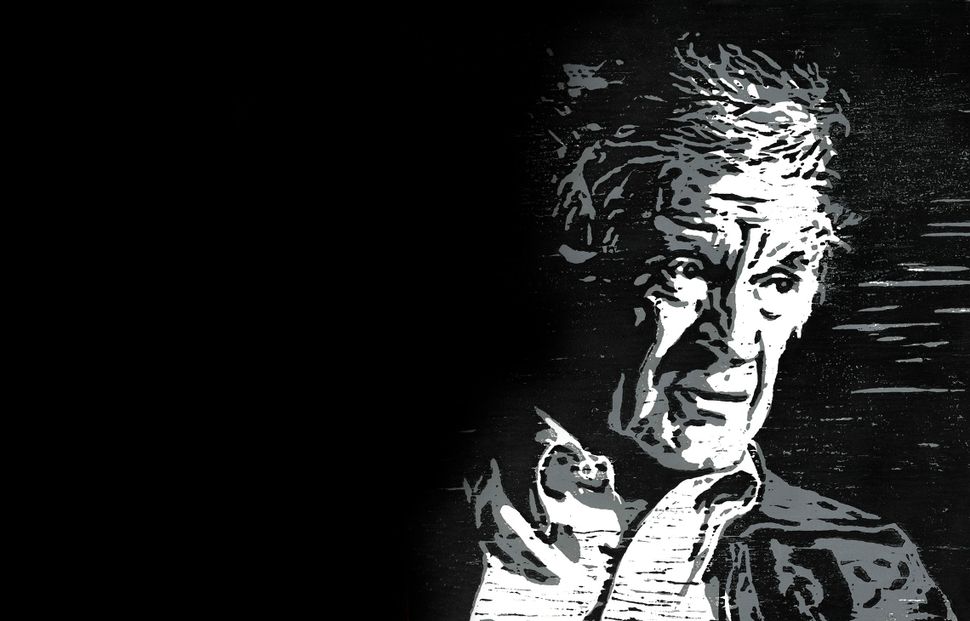 Editor’s note: This story by Elie Wiesel was first published in the Forward in Yiddish on December 12, 1969. This Hanukkah, we decided it was time to give the original Yiddish new life. This new translation, including aspects of the story not included in previous English translations, is by Myra Mniewski and Chana Pollack, the Forward’s archivist.

The story we are about to tell has to do with Hanukkah. It did not take place during the time of the Hasmoneans and Judah Maccabee, but in our own times.

Additionally, I lived through it myself. Nonetheless, it sounds mysteriously faraway, like a legend from times gone by.

It occurred during the Second World War, in the realm of darkness, somewhere on the ground in Poland’s defiled Auschwitz.

December winds were carousing, storming over the camp that looked like a burial ground marked with snow-covered tombstones. The starving, emaciated captives marched out to work knowing that they would be bringing back with them fatalities of frost, illness or just plain weakness.

Older inmates inveighed that it was the cruelest winter of their entire imprisonment. We believed them or we didn’t. They probably said the same thing at the beginning of every winter.

But this time reality supported their forecast. People fell like flies during the first piercing phases. The wind froze the blood in their veins, as well as their vision. Death had not yet been as close. It was practically clear that only a selected few would live to see the spring. The majority would succumb. It was simply unbearable. Everything has a limit, including a person’s ability to resist.

What was on everyone’s mind? To exhaust every possibility of getting a warm shirt for themselves. People sold their crumbs of bread in order to procure some extra shmates to wrap themselves in. Only my bunkmate, the former head of a small Polish town’s yeshiva, had other things on his mind.

At first I had no knowledge of it. How could I have known? When I saw his troubled look, his anxiety, I was sure that just like everyone else, he was trying to “organize” an item of clothing, a warmer coat or even a scarf. That’s why I didn’t even ask him — I had no strength.

In the end, he confided his despair to me: he wasn’t managing to find someone to barter with for his portions of bread. So I asked him, what are you looking for? A shirt or a scarf? He looked at me astounded: what are you talking about? God forbid, I’m not a merchant. What was he then looking for? Potatoes and oil. Specifically eight whole potatoes and oil. If it was impossible to get eight, four would do. The four could be cut in half to kindle eight Hanukkah lights. I thought he had lost his mind. He had to be crazy to attempt such a thing in the harrowing hell of Auschwitz. But he was strong willed: one mustn’t leave a mitsve unfulfilled, especially in Auschwitz. Once we neglect observing one, even a small one, there will soon be a second even bigger one. So don’t even start.

The teacher in him explained his approach. Doesn’t Hanukkah symbolize Jewish sacrifice? For the past 20 generations, haven’t Jews lit candles to remember the heroism of Judah Maccabee, who was ready to die rather than betray the Torah? Was this really the moment to abandon those teachings? No, no! A thousand times no! it was especially important in our current circumstances to follow their path — to kindle the Jewish people’s flames of faith.

In vain I pleaded with him — lighting Hanukkah candles was not a mitsve for which you needed to sacrifice your life. But he kept to his response: these times require us to sacrifice ourselves for every mitsve.

Later, quietly, on our pallet, before falling asleep, he said: I’m convinced my point of view is correct. Especially since we don’t have any prospects of remaining alive. If I thought that any one of us would survive this enemy, I might have a different opinion. Unfortunately we can’t believe in that. So my question is simple: if we’re going to die anyway, why not die for a mitsve, and not just because the murderer wants us to?

Others also tried to talk him out of it. They cited halakhic decisions of all periods, presenting scholarly arguments. But he was well defended and had counterarguments for every challenge. He didn’t quite manage to procure either eight nor four whole potatoes. Until…

Someone, commiserating, had a conversation with a kitchen worker: maybe they could help him? Luckily, one of them was frum, and brought my bunkmate two raw potatoes with a bit of oil. The potatoes were given to a “specialist” who divided them into the correct portions so that by the next morning, our block was able to light the first Hanukkah candle.

The news quickly spread to all the blocks, so naturally people came to make a brokhe and marvel at the old-new miracle of persistent Jewish heroism.

The block leader stayed out of it this time, pretending he knew nothing of it. But once he did come to witness my bunkmate’s singing of “These Hanukkah Lights We Light.” Not many participated in the singing — they didn’t have the vigor. Only at the lighting of the eighth candle did the entire block take an active part in the ceremony: They were attentive to the brokhe and responded with a zealous omeyn and participated with the prayer leader when he chanted popular passages and familiar melodies. That Hanukkah wasn’t forgotten for a long time. The warmth of the long-extinguished lights remained. If Jews had the fortitude to believe in victory over the Greeks, then we could not now surrender our trust in defeating our enemy. Whether my bunkmate lasted till the end, till liberation — I do not know. I lost sight of him during the January evacuation.

But I did not forget his act of courage. Year in, year out, when the world is celebrating Hanukkah, I remember him.

And that is why I am now telling you this story. But let me quickly correct an error: the story did occur in Judah Maccabbee’s time. And I am a witness of it.