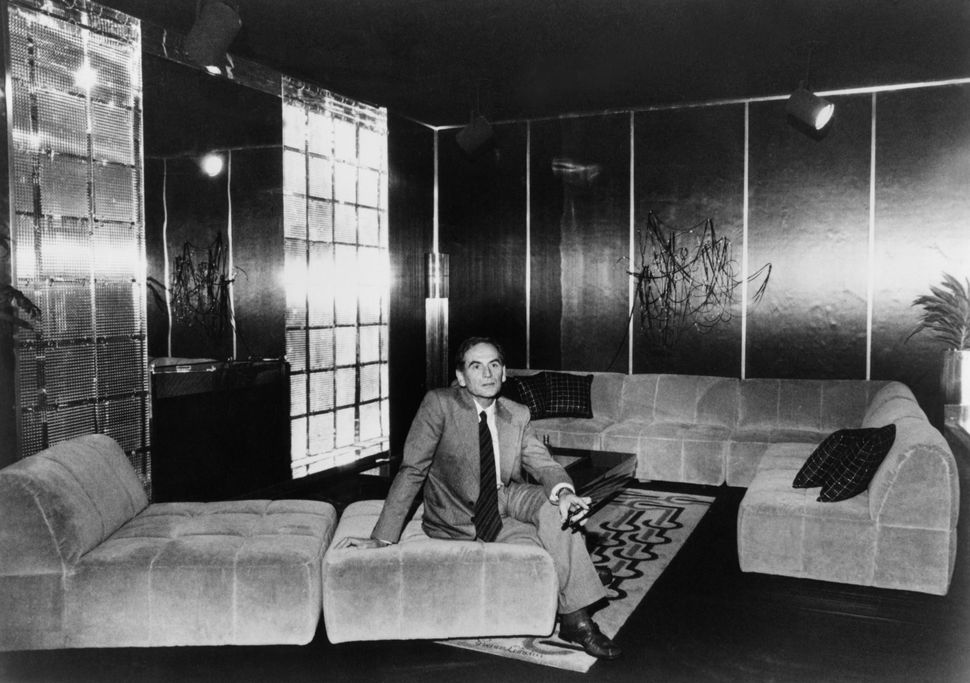 The French fashion designer Pierre Cardin, who died on Dec. 29 at age 98, likely acquired empathy for Jewish customers through his wartime experience as an Italian émigré to France.

Cardin, who created futuristic garb for everyone from the Beatles to NASA astronauts, was born Pietro Costante Cardin in the province of Treviso, in the Veneto region of north-eastern Italy. His parents, farm owners, were economically devastated by the First World War. As a result, in 1924, when Cardin was two years old, the family relocated to France.

A number of authors and journalists have misleadingly implied that the Cardin family had fled the Fascism of Mussolini’s Italy.

Although some unusually perceptive critics of the Fascist regime, notably the conductor Arturo Toscanini, had decried Mussolini by the early 1920s, Il Duce’s temporary lack of overt antisemitism or other signs of Fascist oppressiveness won him admirers, including even a few in Jerusalem. There, in the mid-1920s, Itamar Ben-Avi, the son of Eliezer Ben Yehuda, reviver of the Hebrew language, praised Mussolini’s nationalistic approach, as did the writer Abba Ahimeir, poet Uri Zvi Greenberg, and essayist Joshua Heschel Yevin.

Even if Cardin’s presence in central France was merely an economic, rather than political, exile, he soon became sensitive to the fate of minority groups after being exposed to Gallic xenophobia at school; classmates called him a “filthy macaroni” and worse.

As a teenager, he trained in accountancy, and worked as a bookkeeper for a tailor, who also taught him about cutting garments. As Cardin informed the Italian Jewish journalist Alain Elkann in 1998, he spent the Nazi Occupation years in Vichy, where at as an accountant at the Red Cross, he encountered “poor people that had problems and were looking for help.” One one occasion, in central France, he was arrested by Nazi troops: “Fortunately, I wasn’t Jewish and they didn’t deport me.”

This awareness of his own relative good fortune continued when Cardin eventually reached Paris, and his tailoring talents soon developed into a knack for costume design and later, fashion creation.

Decades later, the recollection of the unfortunate people he had seen at the Red Cross and the fate of Jews in Occupied France may have played a role when in the extended aftermath of the Yom Kippur War, Arab nations pressured clothes designers to boycott the State of Israel.

In 1977, there was a rumor that Cardin would cede to this pressure and dissolve a longtime licensing partnership with Bagir Group, an Israel-based tailored clothing maker.

However, a spokesman for Cardin promptly told the Jewish Telegraphic Agency that Cardin had “every intention to continue to do business in Israel,” adding that the House of Cardin is an “international organization with interests in almost every country in the world and its marketing and distribution policies are not determined by any political or religious considerations.”

Indeed, in 1995 Cardin would participate in a Fashion for Peace event at Caesarea, a coastal town in north-central Israel. A gala fashion show in Caesarea’s ancient Roman amphitheatre was intended to promote a new era of cooperation between the Israeli fashion industry and its international counterparts.

As part of the festivities, Cardin’s creations were juxtaposed with those of Calvin Klein, Ralph Lauren, and Donna Karan, as well as Israeli design brands Gideon Oberson and Gottex.

Small wonder that in 2014, when Cardin chose a new site for what he called his Past-Present-Future Museum of designs, a former tie factory in Paris’ historic Jewish neighborhood of the Marais was selected.

Then there was Espace Cardin, a Paris complex for arts and events, where Jewish performers were often invited, including the French mime Marcel Marceau (born Marcel Mangel). Circa 1993, I interviewed Marceau at Espace Cardin, the backstage area of which looked surprisingly rundown and dilapidated.

The ambient grunge did not dim the aging Marceau’s enthusiasm, nor did it affect the success of a 2011 stage production of Gianni Clementi’s “The Jew” starring the film actress Ornella Muti. “The Jew” was set in Rome’s Jewish Ghetto a dozen years after the German Occupation.

A non-Jewish accountant (that fateful prior occupation of Cardin) who had received the assets and real estate belonging to a former Jewish employer is tormented by a knock on the door, which is presumed to be his long-missing Jewish boss. With Macbeth-like obstinacy, the door knock haunts the accountant and his wife, as a symbol of the legacy of the horrors of the Nazi era.

With comparable determination, Cardin’s business approach to reach out to the entire world, negotiating with Asia and East Europe long before his compatriots did, and licensing hundreds of varied products in his name. It all may have been part of an awareness of fashion as an inclusive, rather than exclusive, activity. Such was one message of an American documentary “House of Cardin,” filmed in 2019, which implied that Cardin as a self-made, independent businessperson who had experienced early discrimination, necessarily rejected exclusivity in his business model.

Such was also the presumption of the English Jewish fashion maven Suzy Menkes, whose 1991 article in the International Herald Tribune, asked, on the basis of a recent biography, whether “deep down in Cardin’s soul, does he perhaps believe in fashion democracy – in feeding the dreams of the poor with the toys of the rich, even if they are just $5 pens and discounted ties sprinkled with the stardust of his celebrity.”

This might explain why Cardin authorized branding for endless tchotchkes, as well as baseball caps, cigarettes, razor blades, and even claimed to reporters in 2002 that he would agree to put his name on toilet paper if someone made him the right offer.

The documentary “House of Cardin,” repeats the notion that Cardin’s family escaped Mussolini, which may have been Cardin’s persistent retrospective take on his emigration, just as his propensity for extravagant, if unrealized real estate projects might be akin to an exile’s attempt to either return to, or build, a safe and welcoming home.

Cardin’s purchase of Maxim’s restaurant near his Paris home and a host of other companies that provided for his daily needs were part of a quest for self-sufficiency, to guarantee that nothing could ever be denied him.

His notion to offer The Light Palace, a futuristic skyscraper some 25 stories high, to his home region of Venice, was akin to leaving a fingerprint on a place his family was obliged to abandon, even if the long-debated project was canceled in 2013 after public and government protests.

“Cyril Against Goliath another documentary out this year, much less hagiographic than “House of Cardin,” recounts how the designer bought one-third of the real estate in a medieval village of Lacoste, in the Luberon region of Provence, only to let the buildings languish, effectively destroying the town for those who had refused to sell out.

Happily, such examples were exceptional in Cardin’s long life and career dedicated to proving doubters and naysayers wrong, and establishing that early experience of minority group sufferings can expand the worldview of a creative spirit.