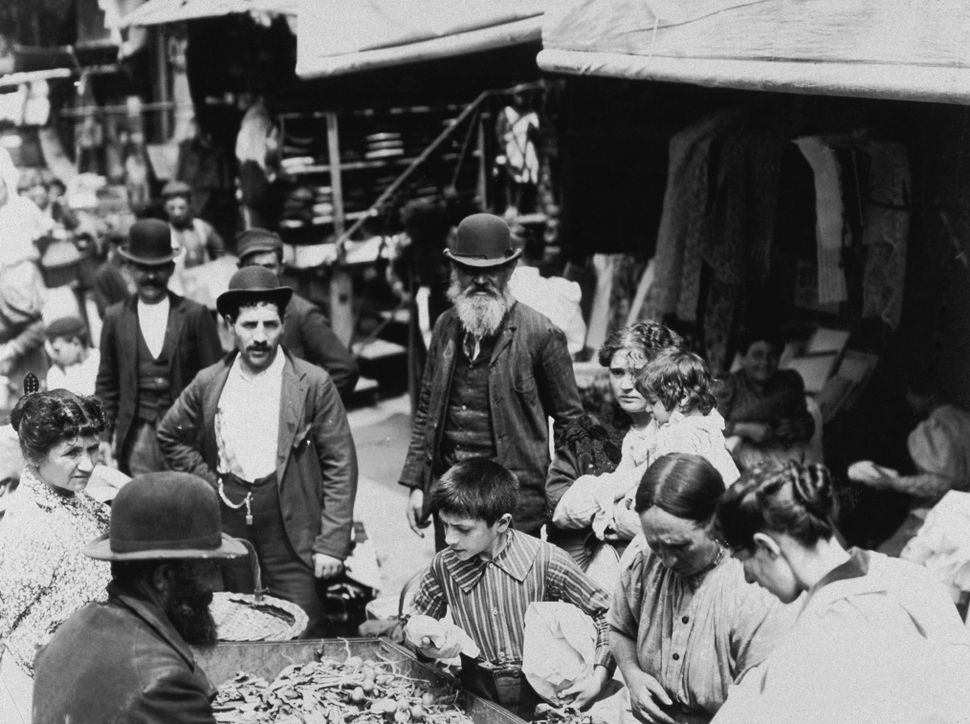 Joan Micklin Silver, who died on Dec. 31 at age 85, proved that for American Jewish women, being a film director means facing challenges of assimilation not unlike those confronted by immigrant ancestors generations ago.

Silver based “Hester Street” (1975) on the novella “Yekl: A Tale of the New York Ghetto” (1896) by Abraham Cahan, founding editor of the Yiddish Forverts.

Like the “Bintel Brief” Yiddish advice column in The Forverts, “Yekl,” like “Hester Street,” seethed with passions of Russian Jews trying to adapt to a new world.

The low-budget informality and authenticity of “Hester Street,” much of it performed in Yiddish, was augmented by editing rhythms that recalled the silent movie era, as did the truly unearthly performance by Carol Kane as Gitl, a wife who initially experiences problems coping with American ways.

Among the delights of “Hester Street” was soundtrack music adapted with uncanny sensitivity by William Bolcom from pieces by Herbert L. Clarke, a cornetist in the band of John Philip Sousa, as played by the American Jewish trumpet virtuoso Gerard Schwarz.

While the style of “Hester Street” was compared by film historians to Yiddish cinema of the 1930s, it more directly echoes the early days of movies, closer to the turn-of-the-century era of the narrative.

A dollop of 1970s impromptu interactions by romantic partners in the manner of John Cassavetes adds further empathetic flavor.

Faced with Hollywood’s sexist refusal to hire female directors, Silver did not abandon her filmmaking dreams. Instead, they were aided by her husband, Raphael Silver, son of Abba Hillel Silver, the Lithuanian-born rabbi of Cleveland’s Temple-Tifereth Israel.

With resolve akin to his father’s, a staunch supporter of Israel, the younger Silver, in addition to his day job as a real estate developer, found time and energy to distribute his wife’s films. At age 83, Raphael Silver was still vigorous enough that his demise was caused by a skiing accident in Utah. After this mishap, posthumous books which he had been working on gradually appeared.

These included a novel, “Congregation,” about filial woes caused by the struggle over the succession of a rabbi who heads a major US congregation; he also co-wrote a light-hearted overview of the Catskill Mountains. and their Jewish traditions.

Joan Micklin Silver’s own family lore from immigrant parents informed her creativity, as she explained to a Director’s Guild interviewer in 2005.

She was likewise open to family experiences of her actors. Doris Roberts, herself of Russian Jewish origin, told Silver on the set of “Hester Street” that her grandfather constantly repeated two Yiddish proverbs: “You can’t pee at my back and make me think it’s rain” and “with one toches you can’t dance at two weddings.” Silver delightedly incorporated them in the screenplay.

As a girl growing up in Omaha, Silver was galvanized by early moviegoing, especially Alfred Hitchcock’s “Shadow of a Doubt (1943),” in which an ostensibly benign family circle turns out to include an evil sociopath.

As a young bride in Cleveland, Silver was similarly impressed by Satyajit Ray’s “Pather Panchali” (1955), about travails of an impoverished family in Bengal, South Asia. Ray’s visual storytelling vocabulary, perhaps unexpectedly, convinced Silver that she too could make films of this ilk.

So she did, first writing “Limbo,” a screenplay about wives of soldiers who were POWs or missing in action in Vietnam. The director Mark Robson, a Canadian with Russian Jewish roots, eventually removed her from the project after she refused some suggested changes to her screenplay. Yet he politely invited her to join the filming of the final script that was developed, so that Silver could learn about direction from practical experience.

By then she had also created short educational films for the Learning Corporation of America, including “The Immigrant Experience: The Long Long Journey,” (1972) which focused on Polish newcomers to America (her sponsors had nixed the idea of anything specifically Jewish as “too atypical.”)

Her own family’s relishing of their experiences in adapting to American life in the Midwest made each shot of “Hester Street” into an emotional experience. Close-ups of Carol Kane were charged with feeling, akin to those of Lillian Gish by D.W. Griffith six decades before.

As Silver would tell the Director’s Guild interviewer three decades after “Hester Street” was released, “And even today, if I look at the movie,… [Kane’s] close-ups still affect me a lot.”

Silver’s powerful empathy with actors resulted in her discovering many talents, not least Jeff Goldblum as Max Arloft, an eccentric critic of rock music in “Between The Lines,” (1977) about the many calamities of journalism.

Silver also gave actors who were celebrated in one corner of the entertainment world new opportunities to excel in others. She cast long-time Yiddish theater mainstay Reizl Bozyk as the forceful grandmother in “Crossing Delancey (1988),” another look at the clash between old and new world customs.

Adapted from a play by Susan Sandler, “Crossing Delancey” was ideally cast, as were most of Silver’s projects. Before selecting Reizl Bozyk, she experienced problems in finding a range of Yiddish-speaking grandmother types to consider for the film.

Silver had even auditioned Geraldine “Gerry” Dreyfuss, a peace and civil rights activist who made cameo appearances in two of her son Richard Dreyfuss’s movies, “Down and Out in Beverly Hills” (1986) and “Let It Ride” (1989).

As it turned out, Bozyk was unforgettable, as was Sylvia Miles (born Scheinwald) as a shadchan, in a performance so exuberant that it oddly recalled some of Harvey Fierstein’s less inhibited appearances.

Silver was also the creator of opportunities to showcase other Jewish creative talents. She worked on revues, one Off-Broadway with Randy Newman’s music, “Maybe I’m Doing It Wrong” (1982), and a feminist-themed show, “A… My Name Is Alice,” (1983) with songs by the composers David Zippel, Winnie Holzman, and Lucy Simon.

Sometimes she courted controversy, as with “In the Presence of Mine Enemies” (1997), a remake of a 1960 drama by Rod Serling about the Warsaw Ghetto, shortly before the Uprising.

The original production, featuring Susan Kohner, Oscar Homolka, and Sam Jaffe, drew criticism for what some viewers interpreted as an antisemitic portrayal of religious observance.

The novelist Leon Uris sent a telegram to the president of CBS, calling Serling’s play the “most disgusting presentation in the history of American television” and demanding that the negative be burned.

Silver’s version attracted no such ire, a tribute to her nuanced skills with potentially explosive material. As always, her connection with actors was admirable, perhaps at its purest in a 1995 radio series coproduced by the Yiddish Book Center for NPR: Great Jewish Stories from Eastern Europe and Beyond.

The resulting impression is of a happy family assembled, exemplifying the celebratory aura of Joan Micklin Silver’s view of the unifying aspects of Yiddishkeit.