Why Trump wasn’t the first Republican to appropriate Aaron Copland 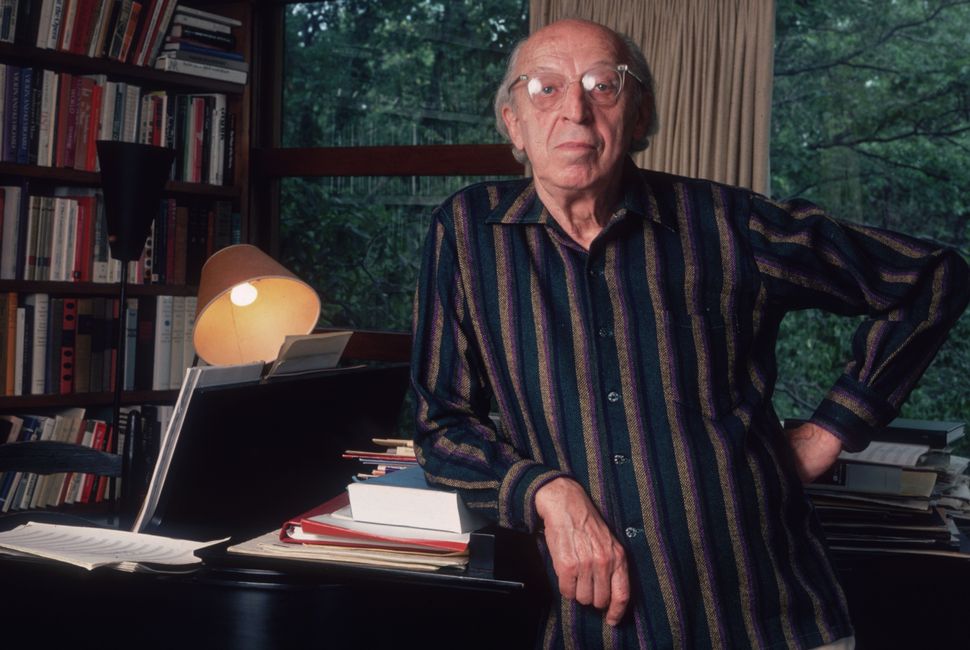 An instance of presidential plagiarism provides a good occasion for considering how Aaron Copland, a gay Jewish leftist composer from Brooklyn, managed to create works of such unsurpassed Americana that they are even coveted by homophobic, antisemitic, quasi-Fascist wannabes.

Minions of the current occupant of the White House recently released a post-campaign TV advertisement, which included a minute of background music from Copland’s “Hoe-Down,” a section of the ballet “Rodeo.” The Copland estate vehemently objected to the unauthorized use of this copyrighted material, and for now, the ad has been withdrawn from online postings.

Copland’s works, often evoking the American heartland, including “Billy the Kid,” “Rodeo,” “Lincoln Portrait,” “Fanfare for the Common Man,” and “Appalachian Spring,” have left a permanent imprint on the nation’s sensibilities.

U.S. Navy recruitment commercials have used “Fanfare for the Common Man” to instill patriotic pride in potential enlistees, as have Republican presidential candidates.

Soon after the Gulf War ended in 1991, “Lincoln Portrait” was recorded with General “Stormin’” Norman Schwarzkopf, a long-time Republican, as narrator.

An even more surprising purveyor of that specific work was the arch-Conservative UK Prime Minister Margaret Thatcher on a 1992 EMI recording.

The energetic, high-spirited “Hoe-Down” from “Rodeo” had previously been used as background theme for a “Beef. It’s What’s For Dinner” advertising campaign launched in 1992 by the Chicago-based National Livestock and Meat Board.

In parody form, “Hoe-Down” also appeared on the soundtrack of “An American Tail: Fievel Goes West,” a 1991 animated film in which the Mousekewitzes, a family of Ukrainian Jewish mice, emigrate to the Wild West.

Copland’s own parents were Lithuanian Jewish immigrants, originally named Kaplan, who, unlike the Mousekewitzes, remained on the East Coast. They gravitated to Brooklyn, where they joined the congregation of the Kane Street Synagogue in Cobble Hill (Congregation Baith Israel Anshei Emes), where Copland was bar mitzvahed.

The mutually supportive qualities of Yiddishkeit and fascination with American folklore did not originate with Copland. The Jewish composer Rubin Goldmark, with whom Copland studied for four years, shared the same obsessions.

A pupil of Antonín Dvořák, the Czech composer who incorporated US folklore into symphonic works, Goldmark was a genial instructor. He would tease erring pupils, who included the American Jewish songwriter George Gershwin, by ironically inducting them into a “Schlemiel Club.”

More seriously, Goldmark’s “Requiem: Suggested by Lincoln’s Gettysburg Address” (1919) for symphony orchestra has been described as prefiguring Copland’s “Lincoln Portrait” (1942). Goldmark’s work printed part of the Gettysburg Address on the musical score itself to inspire performers, whereas Copland had a narrator speak them in his “Portrait.”

A little-remembered glint of Yiddishkeit from the early years of “Lincoln Portrait” occurred during its first west coast performance in August 1942, narrated by Edward G. Robinson (born Emanuel Goldenberg to a Yiddish-speaking Romanian family in Bucharest).

An ardent anti-Fascist who grew up on the Lower East Side of New York, Robinson shared common ground with Copland, who originally considered titling “Fanfare for the Common Man” (1943) as “Fanfare for the Rebirth of Lidice.”

During the 1942 Lidice massacre, Nazis murdered and deported to concentration camps the population of an entire village, now in the Czech Republic.

The final choice of title, “Fanfare for the Common Man” was inspired by a speech by Vice president Henry Wallace, who gave a speech about the century of the common man. Wallace’s support of a JewishsState and anti-Fascism must have struck a chord with Copland.

Yet to many political opponents, Wallace was considered suspiciously left-wing. Nor did Copland escape the post-war paranoia of McCarthyism. In January 1953, when Eisenhower became president, Copland’s “Lincoln Portrait” was scheduled to be heard at an Inaugural concert.

Two weeks before the event, Fred E. Busbey, a Republic congressman from Illinois, denounced “Lincoln Portrait” as “Communist propaganda” and demanded that it be banned. Busbey entered into the Congressional Record a long list of Copland’s supposed associations with leftist or crypto-Communist organizations.

Although now forgotten, Busbey was notorious in his day, listed in the “American Jewish Year Book 1945-1946” under the heading of “Anti-Jewish Manifestations of the year.”

Busbey had reviled Sidney Hillman, a labor leader, head of the Amalgamated Clothing Workers of America and co-founder of the Congress of Industrial Organizations (CIO), who supported FDR’s 1944 re-election campaign.

Part of Busbey’s technique was to “periodically reprint in the Congressional Record a biography of Hillman emphasizing his ‘rabbinical’ education.”

This joined a wider campaign of “virulent anti-Semitism” against Hillman, referring to him as the “Russian-born Mr. Hillman” which was “eagerly picked up by the anti-Semitic press.”

Hillman had indeed been born in Lithuania, where he studied Talmud and attended a yeshiva, but inserting mention of this background in a faux-casual way in the Congressional Record was an open attempt to discredit him and the candidate he supported.

With similar effectiveness, Busbey’s attack on Copland led to the composer being summoned in 1953 to testify in a closed session of the Senate Permanent Subcommittee on Investigations, chaired by Senator Joseph McCarthy.

Transcripts of the hearing, released to the public only 50 years later, show Copland being harassed, bullied, and browbeaten by McCarthy and his associate Roy Cohn.

Later evoked in Tony Kushner’s play “Angels in America,” Cohn was also longtime counsel of the current occupant of the White House, whose employees ripped off Copland’s “Hoe-Down.”

Cohn was not the only Jew to assault Copland; perhaps the most sustained previous onslaught came from the Ukrainian-born Jewish composer Lazare Saminsky, whose “Music of The Ghetto and the Bible” (1934) slated Copland in crypto-homophobic terms by attributing to him a “devious personality with a feline savoir faire.”

In truth, Copland was one of the least catty of modern composers. Yet Saminsky, music director of New York’s Temple Emanu-El and a composer of liturgical music who also commissioned sacred works from the Jewish composers Joseph Achron and Isidor Freed, was steadfast in his contempt.

Saminsky’s “Living Music of the Americas” (1949) further dissed Copland as unoriginal, merely a “shrewd manager of musique à succès… armed with a catalogue of swiftly garnered tricks of craft plucked from all successful stars of the day.”

Yet none of these denunciations, perhaps to be expected in the commercial hurly-burly of career competition among composers, were as devastating as the McCarthyite interrogation, which reads today as a form of torture.

The hearing directly challenged Copland’s embrace of the goodness-of-America theme previously at the heart of his music.

An essentially beneficent spirit, Copland continued to believe in the US system. He also persisted in composing, although no longer for Hollywood movies, where he had made landmark contributions, since he was promptly blacklisted by studio heads.

Instead, in concert works such as “Twelve Poems of Emily Dickinson” (1950), “The Tender Land,” (1954) and “Old American Songs” (1950, 1952), Copland went on celebrating America, keeping the faith despite having seen the worst of what a Republican Congress of his era could do.

Why Trump wasn’t the first Republican to appropriate Aaron Copland