In the shtetl of I.B. Singer’s youth, the ghosts of his past live on 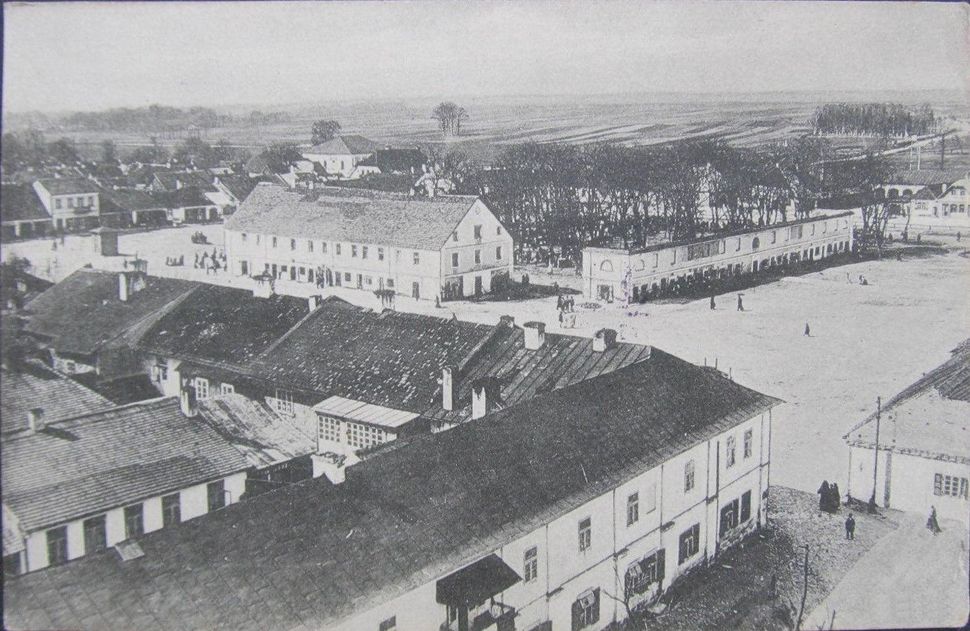 When Singer Lived There: The main square of Bilgoraj Courtesy of National Library of Israel

In his 1978 acceptance speech for the Nobel Prize in Literature, Isaac Bashevis Singer employed memories from his earliest years as a source of hope for coping with the troubles of modern times:

“In our home and in many other homes the eternal questions were more actual than the latest news in the Yiddish newspaper,” he said. “In spite of all the disenchantments and all my skepticism I believe that the nations can learn much from those Jews, their way of thinking, their way of bringing up children, their finding happiness where others see nothing but misery and humiliation.”

As a teenager, in the midst of the First World War, Singer moved with his siblings and his mother to her hometown, the small shtetl of Biłgoraj, where they belonged to a prominent rabbinical family. 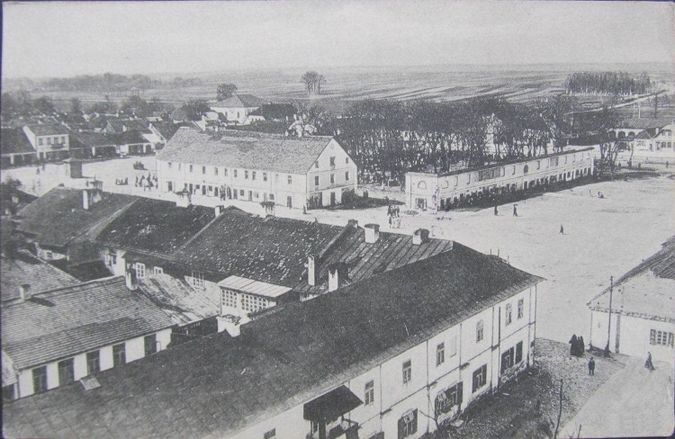 When Singer Lived There: The main square of Bilgoraj Courtesy of National Library of Israel

Following a short stint in a Warsaw rabbinical seminary, the young Singer would return to the ancestral shtetl, where he would fail to support himself by giving Hebrew lessons – an interesting historical detail for the man destined become the first Yiddish writer to win the Nobel Prize.

Biłgoraj was home to a thriving, if modest, Jewish community, and would inspire many of Singer’s works. 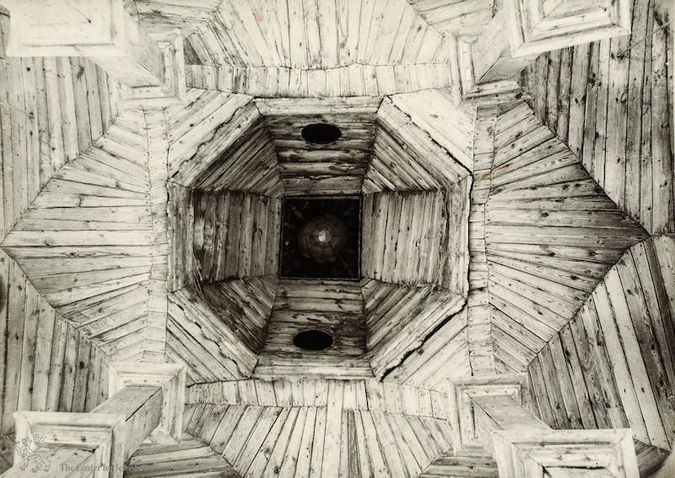 Interior: A photo of the Wolpa Synagogue’s dome taken by Alois Breyer, circa 1910-1913. By Center for Jewish Art at the Hebrew University of Jerusalem;

Nearly a century has passed since Singer left Biłgoraj for good. Other notable former residents included Rabbi Mordecai Rokeach of the Belz Hasidic Dynasty, who famously fled Europe for the Land of Israel in 1944, and the well-known writer and educator Shmuel Ben-Artzi, father-in-law of Israeli Prime Minister Benjamin Netanyahu.

The town has long been bereft of Jewish inhabitants, yet a replica shtetl now stands there, the brainchild of Tadeusz Kuźmiński, a businessman and philanthropist, who recently passed away.

Kuźmiński dreamed of building a site that reflected the multicultural nature of pre-War Poland, which could also serve as a contemporary cultural, commercial and residential center. With the vision only partially realized, Biłgoraj is now home to a re-created Jewish marketplace, and there are plans in the works for a second market square that will include replicas of wooden churches and a wooden mosque (of the type long-used by some descendants of Tatars in eastern Poland). 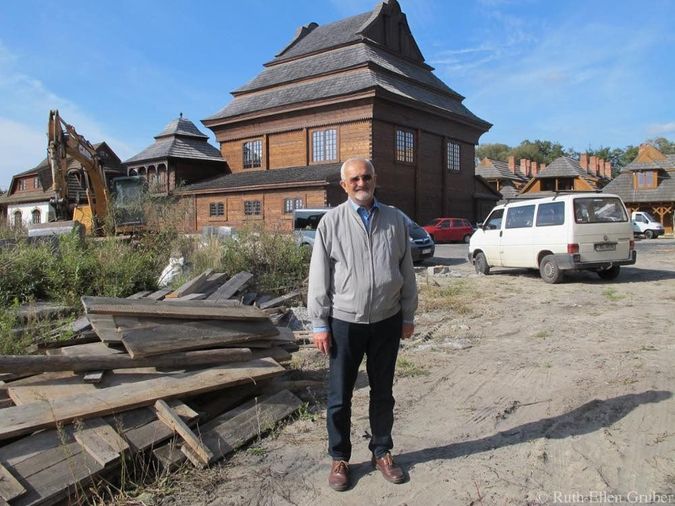 Preserving the Past: The town has long been bereft of Jewish inhabitants, yet a replica shtetl now stands there, the brainchild of Tadeusz Kuźmiński, a businessman and philanthropist, By Ruth Ellen Gruber

A small museum in Singer’s honor is housed in one of the replica town’s structures, yet the most striking feature of the modern reincarnation of Jewish Biłgoraj is Kuźmiński’s full-scale reproduction of the destroyed wooden synagogue of Wolpa (a town in modern-day Belarus) – some 250 miles away.

Somewhat ironically, Wolpa was probably most well-known for the very synagogue now recreated in Biłgoraj.

Wooden synagogues were quite common throughout Eastern Europe, and yet the Wolpa Synagogue was considered to be one of the finest examples, an aesthetic and technical masterpiece, which stood for well over two centuries – surviving one world war before being destroyed in the next.

After receiving his Nobel Prize, Singer addressed the distinguished guests at the subsequent banquet:

“People ask me often, ‘Why do you write in a dying language?’ And I want to explain it in a few words. Firstly, I like to write ghost stories and nothing fits a ghost better than a dying language. The deader the language the more alive is the ghost. Ghosts love Yiddish and as far as I know, they all speak it. 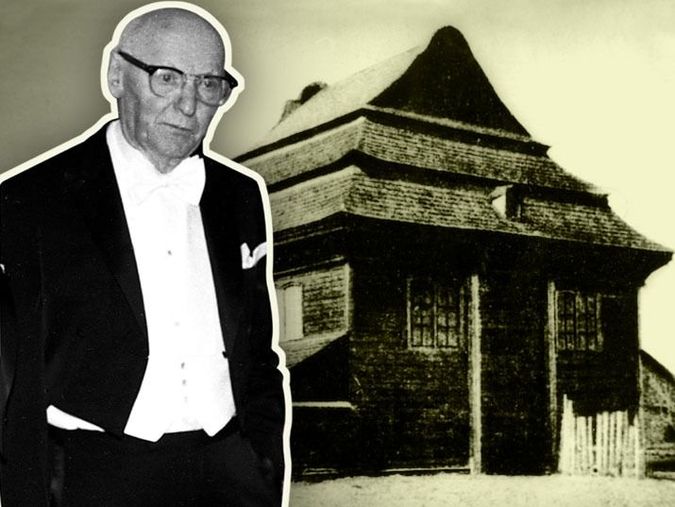 In front of the old synagogue: I.B. Singer superimposed in his ceremonial tuxedo. By Israel Zamir, Pritzker Family National Photography Collection at NLI, from the Dan Hadani Archive

“Secondly, not only do I believe in ghosts, but also in resurrection. I am sure that millions of Yiddish speaking corpses will rise from their graves one day and their first question will be: “Is there any new Yiddish book to read?” For them Yiddish will not be dead.

“Thirdly, for 2000 years Hebrew was considered a dead language. Suddenly it became strangely alive. What happened to Hebrew may also happen to Yiddish one day, (although I haven’t the slightest idea how this miracle can take place).

“There is still a fourth minor reason for not forsaking Yiddish and this is: Yiddish may be a dying language but it is the only language I know well. Yiddish is my mother language and a mother is never really dead.” 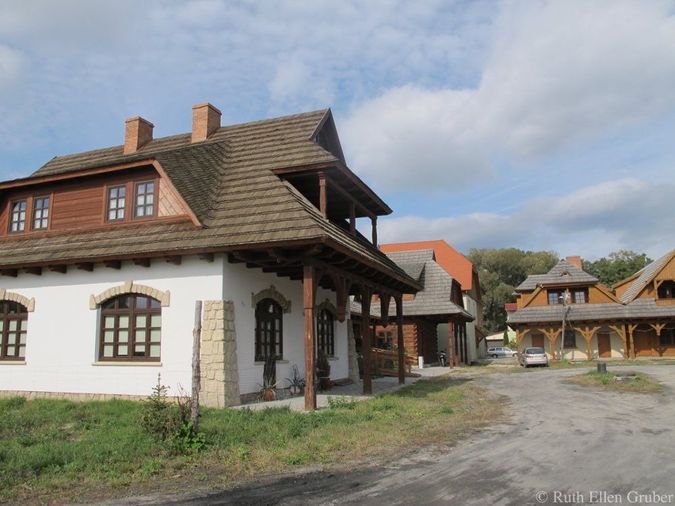 The Shtetl Today: Bilgoraj in 2016. By Ruth Ellen Gruber

What would Singer have thought or written about Kuźmiński’s renascent Biłgoraj?

Would he have seen humor in the idea of a replica shtetl with no Jews?

Or the notion of a once-iconic synagogue transported through space and time, plopped down in tiny Biłgoraj, steps away from a modest museum in his honor (despite the fact that he himself only lived there for a brief period)?

Is Kuźmiński’s Biłgoraj a living ghost? A mother that was never really dead? Or – in the spirit of Singer’s childhood home – an attempt in post-Holocaust Poland to “find… happiness where others see nothing but misery and humiliation?” — *This article first appeared on “The Librarians,” the official online publication of the National Library of Israel.

Check it out for more Jewish, Israeli, and Middle Eastern history, heritage and culture.*

More on the replica shtetl in Bilgoraj and other news, information and resources about Jewish monuments and heritage sites all over Europe, can be found at Jewish Heritage Europe.

In the shtetl of I.B. Singer’s youth, the ghosts of his past live on