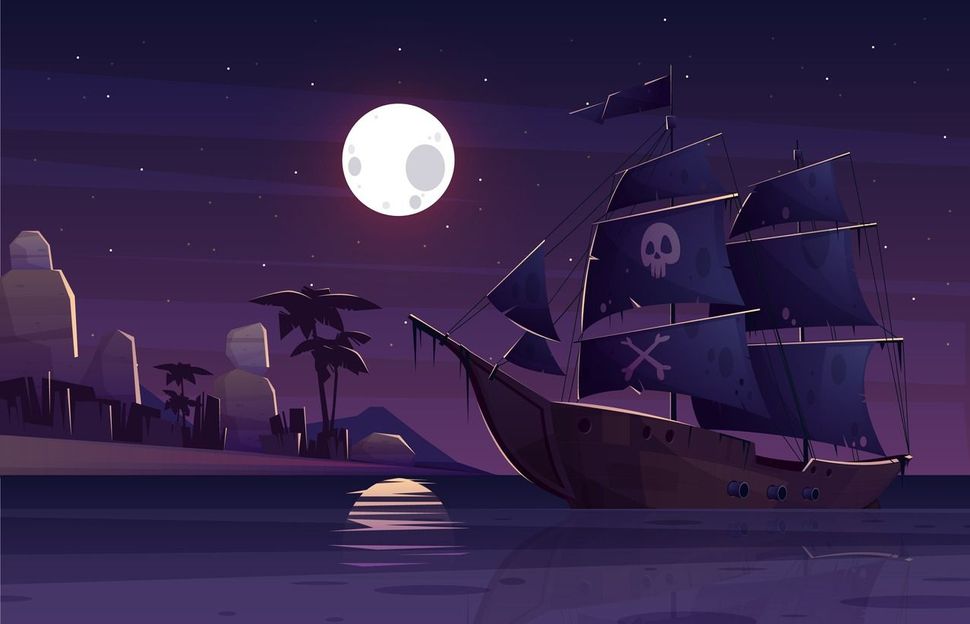 Pirate ship near an island. Courtesy of iStock

I have been singing a sea shanty all day. All week, really. This one is called the “The Wellerman” and it’s having a moment on TikTok. Yes, the whaling boat’s work songs from 200 years ago have gone viral with the teens.

TikTok users are sharing the original audio, sung by a TikToker named Nathan Evans, and adding their own harmonies. The chain of videos grows, with deep bass and baritone and tenor lines added, until the repetitive melody develops an irresistible momentum.

There’s something comfortingly familiar about the sea shanty; they remind me of niggunim, the wordless Jewish devotional melodies. Maybe you sang them at camp. For me, it’s mostly been friends’ living rooms and Shabbat tables, after the meal, when, slightly tipsy on kiddush wine, a nai nai nai begins from somewhere along the table and everyone joins in.

Like sea shanties, niggunim are usually simple but plaintive melodies that are easy to harmonize with. They’re rhythmic and meditative, and they’re designed to be sung on repeat, until they envelop you. As you weave your voices together, the melodies make you feel connected — to the people around you, to Judaism, to God, to something.

Sometimes niggunim have words, often a fragment of liturgy or Torah — their popularity comes from a Hasidic devotional practice known as devekut — but they’re simple and repetitive enough to make picking them up simple. Similarly, sea shanties are usually sung in a call-and-response form, making it easy to join in. (Perhaps, at some point, sea shanties and niggunim were even sung together; there’s a surprisingly rich history of Jewish pirates.)

Sea shanties are work songs, not devotionals; their original purpose was to help sailors synchronize their heave-ho-ing. But if you’re doing heavy manual labor all day, you need something to distract and amuse you — and, if you’re living and working for months at a time in a group aboard a ship on a long voyage, you need to be connected, to feel like a community.

Sea shanties, and most forms of choral-adjacent singing or music, feel inherently old-fashioned and uncool. But there’s something magnetic and powerfully energizing about this music; that’s what it was invented for. Singing together, especially in harmony, gives you the sense of being part of a whole that is greater than the sum of its parts, a collective that is powerful and embracing. It’s a feeling that is in especially short supply in the pandemic, and participating in a communal musical experience gives an, at least fleeting, feeling of connection and collective joy.

When I hand my brother the aux

The sea shanty’s moment in the sun will probably be short-lived, like most trends on TikTok. But if Sea Shanty Tiktok can go viral, I think Niggun TikTok might be next.