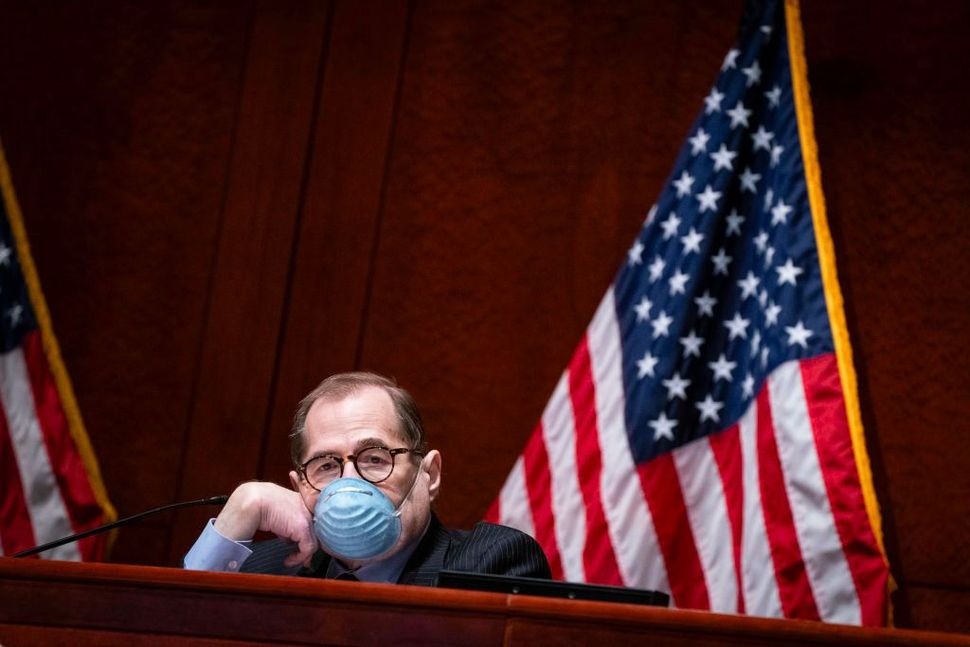 In what was either a gesture of hometown pride or a sneaky piece of sponsored content, Rep. Jerry Nadler arrived at a very important, very televised meeting dangling a large Zabar’s bag.

The lawmaker was seen carrying goodies from the legacy appetizing store as he arrived at the U.S. Capitol to debate a potential second impeachment of President Donald Trump.

Asked what was inside the bag, a spokesperson for Nadler responded in jest, “A babka and the Constitution, what else?”

It wasn’t the first time Nadler has taken on Trump while wrangling bagel paraphernalia. He held a press conference to discuss the Mueller report two years ago in front of a bench with at least three Zabar’s bags.

At the time, New York City journalist Sam Raskin suggested the Zabar’s display could be meant to underscore the congressman’s seriousness of purpose.“Maybe it’s a prop to show he means business, like, ‘I went to Zabar’s on a Sunday afternoon and have $137 worth of food in three bags just in case there’s a shiva,’” Raskin wrote on Twitter.

maybe it’s a prop to show he means business. like, “I went to Zabar’s on a Sunday afternoon and have $137 worth of food in three bags just in case there’s a shiva”

Nadler has also been spotted at the deli itself. Jason Brougham, who works at the American Museum of Natural History, announced on Twitter that he saw the Upper West Side congressman “buying the smallest container of whitefish salad.”

Zabar’s lies within Nadler’s Congressional district, which includes most of Manhattan’s West Side as well as parts of Brooklyn. Whatever snacks are inside the bag must have traveled a long way, since the store has no Washington, D.C. outposts.

Should the House vote to impeach the president, there will be no Zabar’s during the ensuing Senate trial — a 1966 rule prohibits lawmakers from consuming anything except milk, water and candy (what a delicious combo!) while on the Senate floor.