In one of Norway’s first Holocaust films, a fairy tale free of consequence 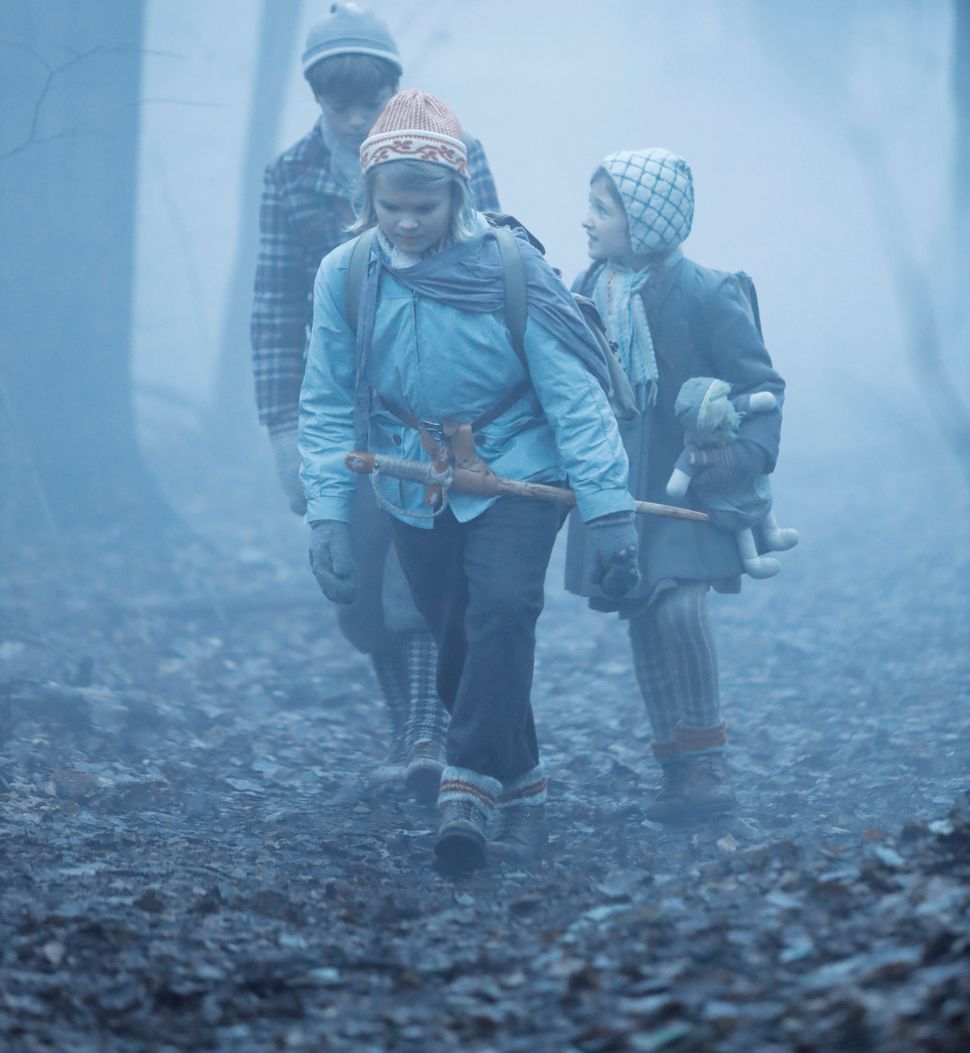 Anna Sofie Skarholt, Samson Steine and Bianca Ghilardi-Hellsten in “The Crossing.” Courtesy of The Jewish Museum

Movies with Nazis tend to stick to a select few country codes.

Hollywood has established the Reich’s presence in France, Eastern Europe and Austria and the Sudetenland and, naturally, Germany. Norway has been mostly missing from the picture, but it shouldn’t be. After all, the country’s wartime leader, Vidkun Quisling, was such an infamous Nazi collaborator his surname became a byword for traitor.

2020’s “The Crossing,” playing Jan. 14 as part of the New York Jewish Film Festival, could have served as a corrective to this largely overlooked part of the map — if only it had something to say about its country’s character.

Based on Maja Lunde’s novel “Over Grensen” and directed by Johanne Helgeland, the film follows four Norwegian children, two Jewish and two their Christian helpers, as they attempt to cross the border into neutral Sweden. Narrated by the protagonist, Gerda (played as a child by Anna Sofie Skarholt), the bulk of the film is rooted in a 9-year-old girl’s vantage point and operates with a kind of fairytale logic.

After the Nazis arrest Gerda’s parents on suspicion of hiding Jews, a helpful policeman tells her they’ll be released if they can’t find the kids they’re looking for. She and her brother, Otto, discover the children in the cellar and set out on their quest to reach their “aunt” in the underground. On their way, they encounter more helpers — including a train conductor who tells them how to avoid guards. They’re also dogged by soldiers and encounter a woman who, plying them with treats and harboring Nazi sympathies, suggests the witch in “Hansel and Gretel.”

The film is aimed at a family audience, but the plot is too generic to command adult attention, and its historical context too vague to educate children about the period.

While it never fully commits to the whimsical potential of a child’s limited understanding of events a la “Life Is Beautiful” or “Pan’s Labyrinth,” it has an improbable magic in its trappings: Nothing really goes wrong and the consequences of failure remain unmentioned and unknown.

Nazis may fire their guns from a distance or sic their hounds on the children, but they could just as easily be chasing after some enchanted ring (sometimes, the film feels a lot like “Fellowship of the Ring, Jr.” — though Gerda imagines her and her companions as “The Three Musketeers”).

While over 1,000 Jews managed the escape from Norway to Sweden, these kids’ success is a marvel. But it never feels anything less than inevitable. We only learn how many weren’t so lucky in text that comes immediately before the credits. Even then you’ll just learn how many were “deported” a word whose full implications may not be appreciated by a young person watching.

As for Gerda, despite her travails, she’s allowed to keep her innocence – as will any viewer her age. Kids watching will hear Nazi talking points and see some overdetermined Nazi villains, but never stumble upon the ambivalent many who allowed the occupation to thrive.

Thankfully, “The Crossing” arrives at a time when several new films are exploring this painful history. “Den Storste Forbryteisen” follows a Norwegian Jewish family’s arrest and deportation, venturing where “The Crossing” never goes. “The Bird Catcher” follows a young Jewish woman living as a man among a pro-Nazi family.

These stories center Jewish experience and tackle the complicated dynamics of collusion and resistance that made Norway such a fascinating pin on the Nazi map. Consider watching them next — or instead.

In one of Norway’s first Holocaust films, a fairy tale free of consequence