In a case of French fascism, portents of a pro-Trump mob 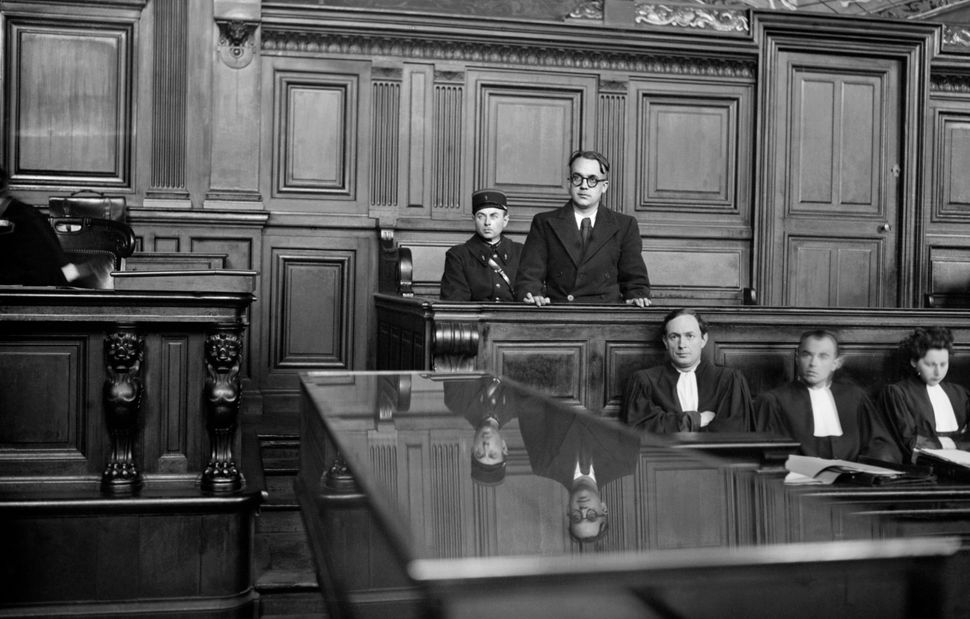 In the wake of the attack on the Capitol, I searched for analogies. I thought about the French far right in 1934, and I thought about France in 1945, when the newly liberated country tried to purge itself of its Nazi collaborators. Between the two events was one figure who can illuminate our present moment: the French fascist writer Robert Brasillach (1909-1945).

Brasillach, a newspaperman and writer of fiction and essays, wrote lovingly about Nazi rallies; he denounced and ridiculed Jews who were in danger; and he encouraged the sentimental support of National Socialism. In occupied Paris, he hobnobbed with the Nazi elite.

Brasillach liked to say that his fascist enthusiasm was inseparable from the memory of a riot that took place on February 6, 1934 — an attempted putsch by a coalition of right wing nationalists — patriotic leagues, veterans groups, royalists — who gathered on the Place de la Concorde, facing the Chamber of Deputies, the French House of Representatives. They were protesting a new Prime Minister on the day he came to present himself to the assembly. Until 2:30 am, the crowds attacked mounted police with swords, sabers, clubs; 1,500 people were wounded and 15 died. The event has gone down in French history as an aborted dawn for French fascism. Of course France never did give in to fascism in the 1930s, but during the Nazi occupation, a right wing authoritarian Vichy government was responsible for the mass deportation of Jews and for a government militia that murdered politicians and members of the resistance.

After Paris was liberated, Brasillach didn’t flee. He hid, and then he turned himself in to the Prefecture of Police. These facts became part of his legend. His trial, a six-hour affair, ended in a death sentence from a jury composed of members of the resistance, chosen for their “national sentiment.” Days later, in fact on the 11th anniversary of the 1934 riots, Brasillach was executed by a firing squad at Montrouge. February 6, 1945 is a day still mourned on the far right, along with February 6, 1934. Among the nostalgic defenders of Brasillach are Jean-Marie Le Pen, the convicted Holocaust denier whose party, now under the direction of his daughter, has made serious inroads in France.

When Marine Le Pen ran against Macron in 2017, she won 34% of the vote — far more than the far right was ever believed to be capable of winning, especially in a country with strict laws against Holocaust denial. With Macron’s popularity waning after a turbulent presidency marked by strikes, terror attacks and an uneven coronavirus response, she is almost certain to face him again in 2022—and she may be stronger than before. Although a far smoother rhetorician than her father and quick to condemn the insurrection on Capitol Hill, Marine Le Pen in the Elysée Palace would nonetheless represent the triumph of a political tradition with great affection for the events of February 1934. As recently as 2011, Bruno Gollnisch, Marine Le Pen’s predecessor at the head of the National Front, since renamed the “National Rally,” paid homage in a party meeting to the dead of February 6.

Some people like to claim that Brasillach’s trial marked the end of the real importance of literature — a moment when this writer’s words counted so much, he could be put to death solely on the basis of what he wrote. Others point out that a writer, with no real political responsibility, would never have been executed if de Gaulle hadn’t needed a scapegoat. Refusing his pardon, de Gaulle wrote, “In literature, as in everything, talent confers responsibility.”

What Brasillach wrote about February 6, 1934, might have been written by any one of the apologists for our own insurrection — or tweeted, with fewer clauses:

“If February 6, 1934 was a failed plot, it was an instinctive and magnificent revolt, a night of sacrifice, that remains in our memory with its odor, its cold wind, its pale running figures, its people gathered on the sidewalks, its invincible hope of a national revolution.”

The excited prose of a member of France’s literary elite and the tweets of an unhinged president have little in common. But as we contemplate Trump’s legacy, we should bear in mind both the idealism of the current enemies of American democracy, and the dangers of whatever myth they will construct around the president they are bound to consider martyred.

In the case of the Brasillach trial, a hasty condemnation and Brasillach’s surprising dignity in the courtroom, his willingness to take responsibility for his actions, gave pause even to Simone de Beauvoir, who attended the trial along with other leading intellectuals. Brasillach wrote poems in prison that Le Pen later produced as vinyl records. In those poems, Brasillach prepared his legacy by comparing himself to resistance fighters whose names were carved on the walls of his prison, and to André Chenier, a victim of the revolutionary terror. Poetic revisionism. Quoting the “Poems from Fresnes” became a kind of secret handshake among Brasillach supporters.

Today Brasillach is remembered as a victim of the excesses of the purge of collaborators, perhaps more than he’s remembered for some of the terrible things he wrote, for example that France needed to “separate from the Jews en bloc and not keep any little ones.” Brasillach’s brother-in-law, Maurice Bardèche, wrote the first violent denials of the Holocaust in the wake of Brasillach’s execution; Bardèche published the infamous revisionist Robert Faurisson in his magazine, “Defense of the West.” The t-shirts seen in the Washington siege — “Camp Auschwitz” — show the family resemblance between the fascists of 1945 and 2021.

The Brasillach story raises the issue of how to respond to our own “February 6, 1934”. The first requirement, it seems to me, is vigilance about the way the insurrection is represented, and a careful accounting for those responsible, both in the short term and the long term. What actions and what words enabled the riot. The second is an absolute clarity of procedure. No show trials, but no white washing either. Ignoring what happened is not, contrary to cliché, a way of healing.

What’s happening in this country is not only a war between truth and lies, democracy and violence. Words still matter, and we are in a war over the words we live by.

The author Alice Kaplan is the Sterling Professor of French and director of the Whitney Humanities Center at Yale.

In a case of French fascism, portents of a pro-Trump mob