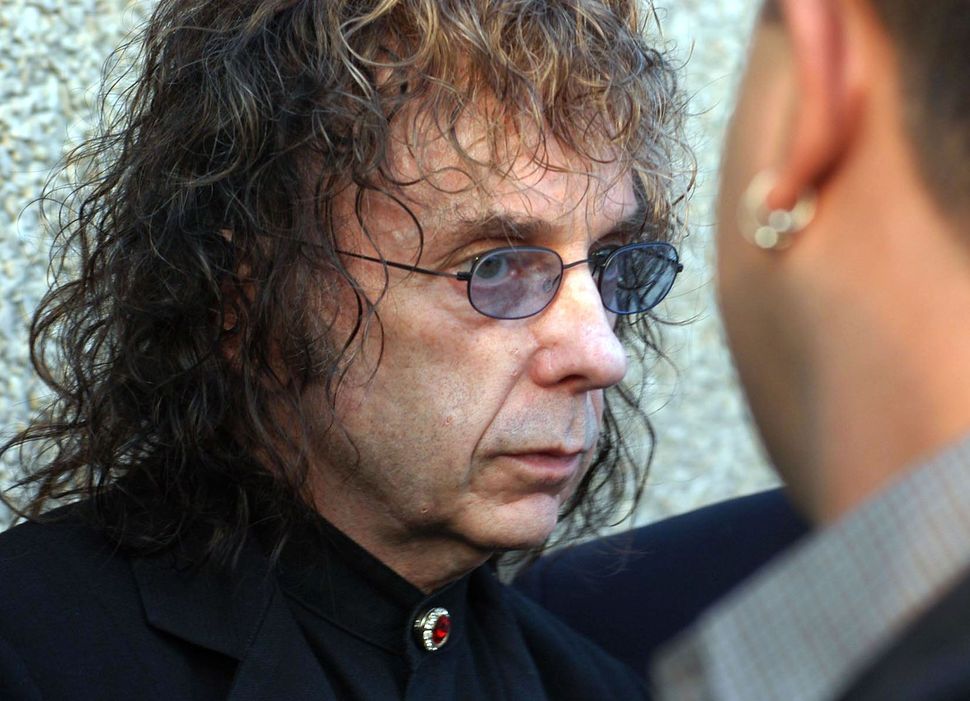 The record producer and convicted murderer Phil Spector, who died on Jan. 16 at age 81, showed that historical and personal trauma can motivate, and also destroy, Jewish artistic urges.

Spector’s decades of abusive behavior toward colleagues, especially women, culminated in the 2003 murder of the actress Lana Clarkson, for which he was sentenced to 19 years to life in prison.

Over decades, his misdeeds may have been tolerated in part by musicians who were deceived by his Jewish cultural observances into a false sense of security or familiarity.

Spector’s obsession with guns alarmed many, but it was accompanied by a disarming fondness for kosher wine, according to Chris Stein, the Brooklyn-born Jewish guitarist of the new wave band Blondie.

When Spector died, Stein tweeted: “When we went to Phil Spector’s house in the 70s he came to the door holding a bottle of diet Manischewitz wine in one hand and a presumably loaded 45 automatic in the other…I thought he was nuts.”

A similar conclusion was reached during Spector’s 1977 studio collaboration with Leonard Cohen on the album “Death of a Ladies’ Man.”

As usual, Spector waved guns around to threaten musicians, and according to Cohen biographer Liel Leibovitz, “stumbled out of his booth and into the studio. In one hand, [Spector] held a .45 revolver; in the other, a half-empty bottle of Manischewitz sweet kosher wine.”

Cohen himself later recalled: “With Phil, especially in the state that he found himself, which was post-Wagnerian, I would say Hitlerian, the atmosphere was one of guns, I mean that’s really what was going on, was guns.”

Some kind of Holocaust-related persecution mania may have been preying on Spector’s mind in 2004, when he was indicted for murder. He excoriated the local district attorney as a “Hitler-like DA and his storm trooper henchmen.”

Spector’s adoration of weaponry and brooding over Nazis fed on feelings of paranoia, combined with megalomania. Yet his excesses fueled by drugs and alcohol were largely tolerated by the music industry in part because of his financial and career success.

Another tweet after Spector’s death was from Steven Van Zandt of Bruce Springsteen’s E Street Band, which offered its own homage in sound to Spector in the 1975 studio album “Born to Run.”

Van Zandt tweeted qualified praise of Spector for “having made some of the greatest records in history based on the salvation of love while remaining incapable of giving or receiving love his whole life.”

Yet arguably, Spector did love some people, starting with his father. Spector was born in the Bronx to a first-generation immigrant family of Ukrainian working class Jews; his father was an unemployed steelworker and his mother a seamstress.

Spector’s father committed suicide in 1949, in the throes of financial anxieties. The family had inscribed on his gravestone, “Ben Spector. Father. Husband. To Know Him Was To Love Him.”

The latter phrase was co-opted by Spector for one of his first hits, created with classmates from Fairfax High School in Los Angeles, where Spector’s mother had relocated the family after her husband’s death.

In the 1950s, Fairfax High School was rampant with Yiddishkeit, to the point where some local non-Jewish families avoided enrolling their offspring there. Modern Hebrew language classes were taught by the principal of the Beverly-Fairfax Jewish Community Center, Ronnie Tofield.

His classmates included the singer Marshall Leib, with whom Spector formed The Teddy Bears, a trio that recorded “To Know Him Is to Love Him.”

Its lead singer was another school friend, Annette Kleinbard, of Polish Jewish origin. By then, Spector had acquired musical mastery through lessons with the jazz guitar virtuoso Barney Kessel, born in Muskogee, Oklahoma to Russian Jewish immigrant parents.

For Spector, having lost his father shortly after World War II may have confounded the Holocaust in his mind with his family’s tragedies.

To the “London Evening Standard” in 1964, Spector confided that his recordings were “built like a Wagner opera…It’s in the mind, I dreamed it up.”

Part of the dream was also to empower African-American singers and those of Latinx origin. Spector co-wrote the song “Spanish Harlem” in 1960 for Ben E. King with Hispanic rhythms aplenty.

Spector was a devotee of Latin percussion, and such instruments as shakers, gourds, and maracas can be heard on his landmark recording of “Be My Baby” (1964) by the Ronettes.

And the recording that Spector considered a personal best was Ike & Tina Turner’s “River Deep – Mountain High” (1966) in which Tina Turner sang so forcefully as to discomfit the U.S. record buying public. Characteristically, Spector discounted Tina Turner’s well-documented accounts of being abused by her husband.

Despite his repeated demonstrations of sociopathic behavior, Spector may well have loved another person, his friend the comedian Lenny Bruce (born Leonard Alfred Schneider).

It is difficult to associate comedy with the humorless Spector as portrayed theatrically by Al Pacino in David Mamet’s 2013 TV film “Phil Spector.”

Yet in 1966, the same year that Bruce would fatally overdose, Bruce, Spector and poet Allen Ginsberg had a whimsical discussion taped by Ginsberg, now housed in a Brandeis University archive. On the tape, Spector describes how he prepared for one of Bruce’s west coast bookings by visiting Jungleland, a zoo outside Hollywood, to consider a potential opening act for Bruce, consisting of a trio of dancing pigs.

It is unsure whether this treyf booking was ever made.

Long before Bruce’s death, Spector had produced previously unissued recorded material by the nightclub comedian, much of it echoing Jewish experience. Spector continued to do so through for years, with titles like “Lenny Bruce Is Out Again” (1966) and “The Law, Language and Lenny Bruce” (1974).

Spector also purchased the negatives of crime scene photographs of Bruce’s corpse to keep them from being published in the media, and paid for the funeral and memorial services, at which he delivered the main eulogy.
Spector’s abuse of others close to him, as recounted in a harrowing memoir by Ronnie Spector, his second wife, overshadowed any loyalty or kindness he showed to Lenny Bruce.

Yet such alliances may have allowed some showbiz observers to overlook the seriousness of Spector’s sociopathy. He was invited on TV chat programs, including a surreal appearance on the Merv Griffin Show in 1966.

Spector took this onslaught from a nightmare Jewish paternal figure, the reverse of Spector’s own worshipful attitude to his own father, sedately, possibly under the influence of drugs or alcohol. At least he did not pull a gun, which was his tragic choice of response in later, savagely uncontrolled, years.