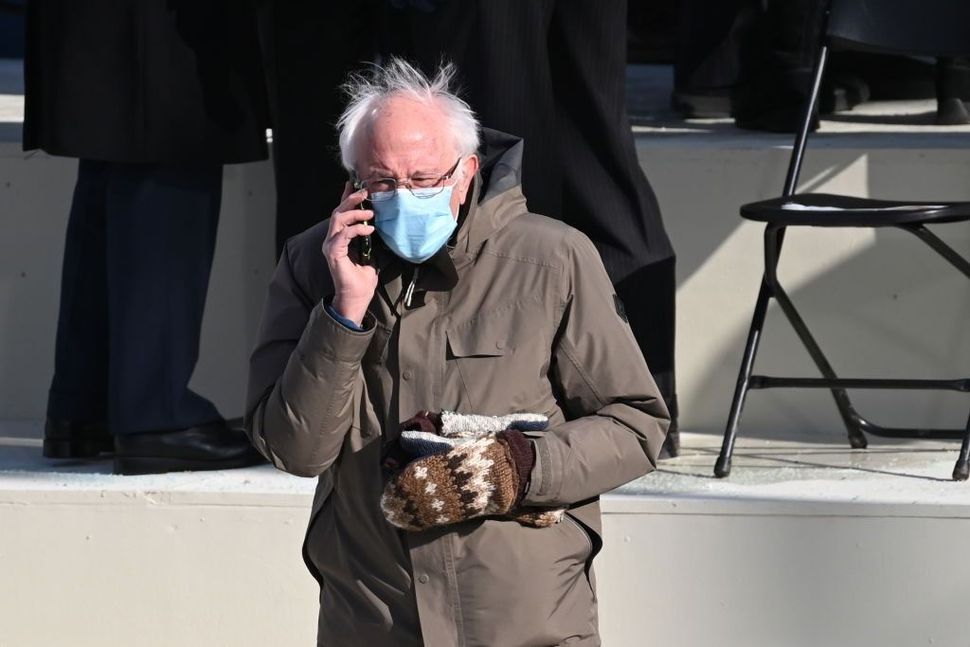 Bernie Sanders on the phone at the inauguration. Courtesy of Getty Images

While many on Twitter obsessed over important inauguration fashion moments such as how great Michelle Obama looked, Gaga’s brooch and, of course, Ella Emhoff’s sparkly-shouldered coat, most of the internet’s attention was focused on a picture of Bernie Sanders, hunkered down in a folding chair and bundled up in a puffy coat and enormous mittens. It has already become a meme, one which I fully expect to have great staying power. It’s an instant classic.

But Bernie’s sartorial choices are more than cute outerwear. At an event all about seeing and being seen, Bernie did what he has always done — refuse to perform, and remain stubbornly himself. His mittens — made by a constituent — are a reiteration of his politics, a reminder of his suspicion of big money and showy displays dominating politics. He is there to focus on the important thing, the actual work of governing, and he sees no reason not to remain comfortable while he’s doing it.

“In Vermont,” he told reporters after the inauguration, “we’re not so concerned about good fashion. We want to keep warm.”

At this point, we all know who Bernie is and what he stands for. And he made it clear through his jacket, his expression, and his harried attitude while pushing through a mingling crowd of politicians, that he hasn’t changed. He will show up, and he will make nice when he must, but only exactly as much as he needs to.

He’s the uncle who showed up to the Bat Mitzvah because it’s family, but thinks all the fuss is a bit much.

The music at this outdoor Bat Miztvah is way too loud. I’m, sitting as far away from the DJ’s speakers as possible. Just get me a few things from the buffet. pic.twitter.com/oer0OljgJO

Or, possibly, he’s your dad, waiting for you to pick out a dress for said Bat Mitzvah. He doesn’t care which one, provided it’s not too expensive.

In Jewish yoga this pose is: waiting for my wife at Loehmann’s pic.twitter.com/Qik7wsZ0ad

Of course, he would have also had to go to Zabar’s to pick up brunch supplies for the reception after the Bat Mitzvah.

Me at the deli counter making sure they slice the lox right pic.twitter.com/pA5qf0Xu6j

Or, perhaps it wasn’t a Bat Mitzvah. It may have been a shiva. Either way, far too much talking.

when you’re at a shiva for a guy you didn’t like pic.twitter.com/Qy5vOQdiqM

Really, Bernie just wants you to get to the point, regardless of the ceremony.

Bernie’s just waiting for the shul president to finish announcements so he can go to kiddush already. pic.twitter.com/2MV20rkHEf

When the chazzan doesn’t skip the extra piyyutim. pic.twitter.com/8E2Tih2Xlc

It’s possible he’s also a soccer mom. You’ve got to dress right to survive your kid’s games if you live in Vermont.

Bernie Sanders: “How long are these games? My feet are chilly.” pic.twitter.com/pGcInw8Gpv

Whatever it was, all the fuss certainly seems unnecessary.

Bernie looking like “this could’ve been an email.” pic.twitter.com/Dacef6o7PE

And you know that’s the only coat he owns — it’s starred in other memes. Why would you need two? This one is warm. Gets the job done.

why would bernie own a second jacket https://t.co/DEqblhka59

Since it’s his only coat, he definitely didn’t have time to clean it out. Anyway, your nose does tend to run when it’s cold out. Best to be prepared.

You cannot tell me these pockets are not absolutely stuffed to the brim with crumpled tissues and receipts pic.twitter.com/6ewKEDWBZH

Bernie Sanders rolling up in a 1997 toyota corolla, coffee cups spilling out of his car, grabbing a manila folder full of receipts and tossing a lozenge in his pocket before running to his seat exactly 1 second before the inaug

In a day that stands on ceremony, one which was full of designer coats and belts out of reach of the average American they work for, Bernie is there, as always, to stand for the Everyman.

And, honestly, even if Bernie had been the president-elect, things might not have looked too different.

This is also what a Bernie inauguration would have looked like pic.twitter.com/qegQzKfp80

Mira Fox is a fellow at the Forward. You can contact her at [email protected] or find or on Twitter @miraefox.