How an Orthodox Jewish refugee became a theater and opera legend 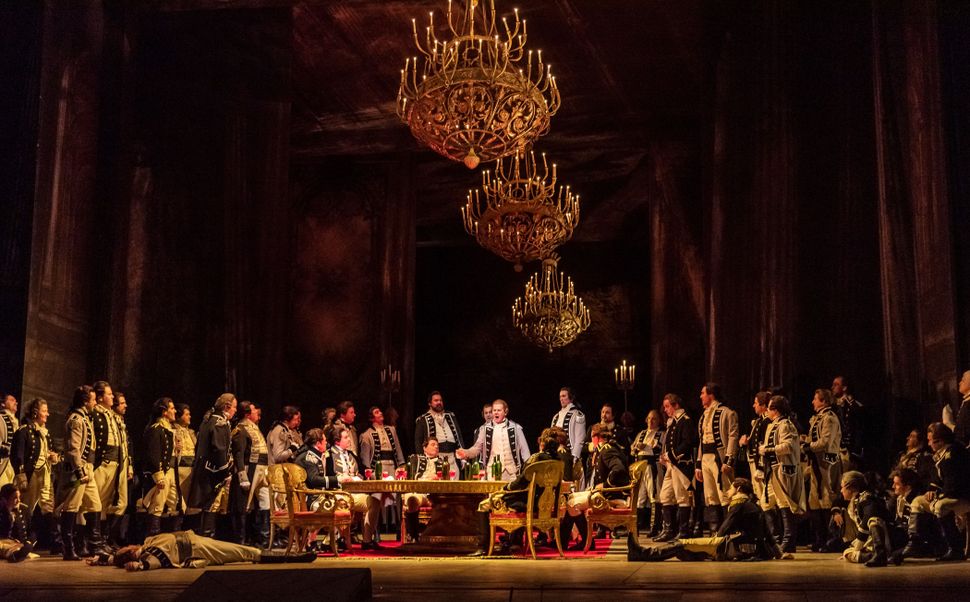 “The Queen of Spades,” directed by Elijah Moshinsky By Getty Images

The Australian opera and theater director Elijah Moshinsky, who died on Jan. 14 of COVID-19 complications at age 75, was celebrated for his onstage collaborations with superstar singers from Luciano Pavarotti to Plácido Domingo, and stage legends from Helen Mirren to Judi Dench. Yet Moshinsky’s most ardent lifelong inspiration was arguably drawn from his Jewish experience.

The moral and ethical imperatives displayed in his work drew directly from wide-ranging exposure to Yiddishkeit.

Moshinsky’s Orthodox Jewish parents had fled from Vladivostok in the Soviet Union to the Shanghai French Concession in China, where he was born.

The Shanghai French Concession was an area under French leadership until 1943, when France, under Nazi occupation, signed it over to the Axis forces of Japan.

Moshinsky’s half-brother Sam later wrote a memoir of his family’s challenges in China.

Although the Moshinsky family survived the upheaval, the arrival of Mao Zedong to power proved to be too much, and in 1951, they moved again, to Melbourne, Australia.

There, as he later recalled in 2019: “I was a refugee child from a Jewish background and [my high school] embraced many post-war refugees.”

Among his favorite high school activities was to cut class to see films by the Austrian Jewish filmmaker Billy Wilder. Moshinsky went on to Oxford University, where he studied with the Latvian-born English Jewish historian of ideas Isaiah Berlin.

As Moshinsky recalled to an interviewer in 2011, Berlin accepted him as a pupil, saying “An Isaiah should choose an Elijah.”

Moshinsky’s fascination with theater was evident early on, when he designed the sets for a 1965 college dramatization of Franz Kafka’s “The Trial.”

After university, he retained a sense of historical context for all artworks, whether plays or operas, as a legacy of his years working with Berlin.

So when Moshinsky was asked in 2001 to direct a production of Verdi’s “Nabucco,” about Nebuchadnezzar’s destruction of the Temple of Solomon in Jerusalem and the ensuing Jewish exile in Babylon, he had an innate sense of how to portray the events of the opera.

Moshinsky was also alert to potential absurdities in attempting to bring operas up to date by modernizing them. He was repelled by another director’s production of “Nabucco” in which a Holocaust-era Fascist ruler improbably converted to Judaism.

The same deft avoidance of what might otherwise be unseemly was present when Moshinsky staged the opera “Samson and Delilah.” The composer Camille Saint-Saëns’ biblical epic was yet another 19th century opera with a potentially silly libretto.

An acute sense of the ridiculous was essential for a 1993 Moshinsky project, the TV film “Genghis Cohn,” based on “The Dance of Genghis Cohn” (1967) a novel by the Lithuanian-born Jewish author Romain Gary.

The story features a former Nazi officer haunted by the dybbuk of a Jewish ventriloquist he had sent to be murdered in a concentration camp. The music-hall comedian Cohn, played in the film by the South African Jewish actor Antony Sher, is deliberately portrayed in an overtly theatrical manner, as he advises the former Nazi to read “The Diary of Anne Frank” and eat chopped liver and potato latkes.

Moshinsky’s own personal investigation of Jewish culture was assisted by repeated collaborations with contemporary playwrights such as Ronald Harwood (born Horwitz), a South African Jewish writer whose play “Another Time” (1989) starred Albert Finney.

It told the story of a Jewish family in Cape Town, South Africa, whose son is a gifted pianist; the remainder of the play is set decades later, inquiring what the family’s sacrifices had meant to the now-successful keyboard artist’s career.

The play takes place in 1986, when Kurt Waldheim, who served as an intelligence officer in Nazi Germany’s Wehrmacht, was elected president of Austria.

Moral lessons and ethics remained preoccupations of Moshinsky’s, even when the subject matter was not ostensibly Jewish.

In 2017, looking back to his origins in Shanghai, he directed “The Diaries of John Rabe,” a new opera by the Chinese composer Tang Jianping. The subject was the Nanjing Massacre, six weeks of mass murder committed by Imperial Japanese troops against the residents of Nanjing, then-capital of China.

Performed on the 80th anniversary of the tragedy, the opera’s subject matter commanded his attention, as Moshinsky informed a Chinese interviewer. He added, “I only direct productions that I feel morally connected with.”

Similar motivations were at work in 2019, when Moshinsky co-signed an open letter along with the English Jewish actresses Maureen Lipman and Miriam Margolyes, to protest what they called “Jewface” casting in the UK.

The occasion was a London staging of the US musical “Falsettos” by William Finn and James Lapine, in part about themes of Jewish identity, as a broken family plans their son’s bar mitzvah.

Moshinsky’s co-signed letter observed that when “Falsettos” was revived on Broadway in 2016 revival, both Jewish and non-Jewish actors were involved, but in London, where non-Jewish actors are routinely chosen for prominent Jewish roles, there was no such equitable approach:

“In a time of increasing antisemitism, of verbal and physical attacks on Jewish people and wholesale, violent shootings in synagogues, Jewish schools and cultural centres forced to be protected by security guards, it feels more crucial now than ever to make accurate representation of…Judaism a priority in theatre.”

Arguing that “Falsettos” would benefit from the presence of at least a few Jews in the creative effort, the letter went on to state:

“Rehearsal rooms absent of living Jewish voices are in danger of viewing Judaism like a distant, historical, foreign element rather than a vibrant, contemporary and deeply relevant culture…To the producers of Falsettos and any future productions of plays that depict Jews, Jewish culture and Jewish identity; we implore you to show sensitivity, engage with the Jewish community and hire Jewish performers and artists to work on and off-stage. Make sure there is a Jewish presence in your rehearsal room. Include us in these conversations of cultural and racial appropriation. Consider how you can depict Jews and Jewish culture without reinforcing cultural and racial stereotypes. Your show will be all the stronger for it.”

While the effort by Moshinsky and his colleagues had no direct result, as the cast and crew of the London “Falsettos” remained entirely non-Jewish, the conversation caused by the letter did draw attention and support from theatrical allies from other minority groups, such as Daniel York Loh, a British East Asian actor, and Roy Alexander Weise, a director of West African origin.

How an Orthodox Jewish refugee became a theater and opera legend