Orbisculate: How a made-up word became a way to honor a father lost to Covid

Hilary and Jonathan Krieger do not remember the first time their father, Neil, used the word “orbisculate.”

They were just kids then, and he said the made-up word (pronounced ȯr-BIS-kyoo-leyt) meant “to accidentally squirt juice and/or pulp into one’s eye” or other body part — as in, what happens whenever one attempts to eat a grapefruit.

Now Hilary, who is 44, and Jonathan, 35, are on a mission to get “orbisculate” into the dictionary to memorialize their father, who died last April from Covid-19 at 78.

And they’re not stopping there: their website includes a 50-item bucket list for the word, including getting it into a story on a major news site (check: the Boston Globe wrote the story in December), a crossword puzzle and a Saturday Night Live sketch. Or how about getting Ben & Jerry’s to use it in the name for a new flavor, perhaps involving grapefruit sorbet?

To date, around 5,000 people have visited the site, Hilary Krieger said, and about 500 people have signed a petition aimed at dictionary editors.

“It’s really resonating with people,” said Hilary, who lives in Brooklyn and works as an editor on the NBC News Opinion website THINK. “Or everyone’s so bored with quarantine they’re up for trying anything!”

Friends and other site visitors have added their own alternate definitions or uses of the word, including the oil that squirts out of pepperoni on pizza.

“Lots of people have come up with creative ways to use it,” Hilary said, adding that she thinks “creative and funny” dad would be tickled by the alternative meanings.

The campaign began in the days after Neil Krieger’s death.

“When people can’t come to the funeral and the shiva, you spend a lot of time trying to describe the person you lost in just a few words,” explained Hilary Krieger. “Orbisculate kept coming up in those conversations, because it said so much about him in just one word – his humor, his whimsy, his ability to take something that should be negative and find something to enjoy with it.”

Orbisculate, she said, “was just like any other word used around the house.”

“When you’re a child growing up,” she noted, “you have no reason to think it’s anything but a regular word.” 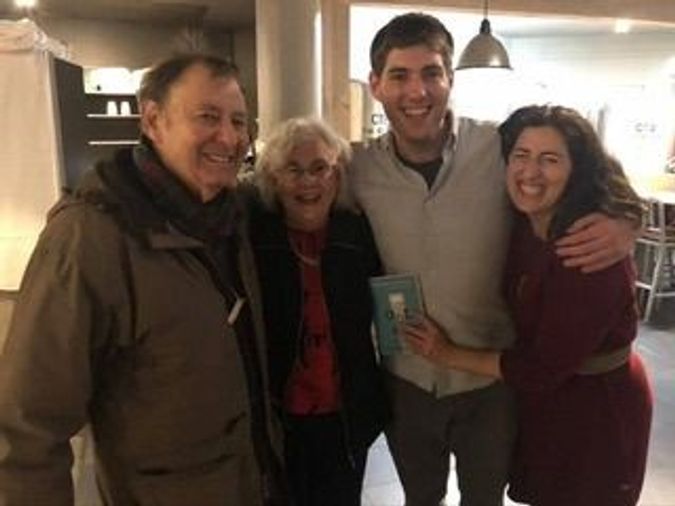 The Krieger family Courtesy of the Krieger Family

Neil Krieger grew up in Brooklyn’s Bossert Hotel, where his parents operated a restaurant that was visited by Neil’s childhood hero, Jackie Robinson and many other Brooklyn Dodgers. In fact, when the Dodgers won the 1955 World Series, the restaurant hosted the victory party.

As a child, he also spent time in and around the chicken coops of the Garber Poultry store his grandfather started after immigrating in the late 1900s from Russia’s Pale of Settlement. Neil’s affinity for grapefruit may be rooted in his time picking them as a volunteer on a kibbutz in northern Israel.

He was a research scientist and eventually set up a business consulting for biotech companies; in addition to making up words, the Krieger kids note on the “orbisculate” website, Neil Krieger also invented safer form of anesthesia — and “pioneered an annual family greeting card that people actually enjoy getting.”

He and his wife, Susan, raised Hilary and Jonathan — author of the 2018 book “Odd Jobs: One Man’s Life Working Every Gig He Could Find, from Bathroom Attendant to Bikini Model” — in Boston. Their 46th wedding anniversary would have been in August.

Since launching the orbisculate campaign, Hilary Krieger said she has learned that, while dictionary editors are “constantly scouring the English language to find new words,” getting a new word added “generally takes several years. Since the decisions are subjective, words that make it into one dictionary may be left out of others.

“The key is to get the word used as widely as possible – among different groups of people, in different places, in different types of publications,” Hilary said.

Hence the website’s list of goals beyond the dictionary. The Kriegers also hope to hear the word used by a government body, in the lyrics of a song (preferably by Lin-Manuel Miranda), in a TED talk, on a podcast, in a comic strip and more. There are also a few blank spaces where site visitors can suggest other goals.

Proceeds from the grapefruit-themed T-shirts and tank tops sold on the website go to Carson’s Village, a family-run charity that helps people dealing with loss.

“I think this project has multiple legacies,” Hilary said. “One is just for people to be aware of our dad and what a wonderful, funny, creative soul he was, and find some inspiration and a moment of enjoyment from that. More broadly, we hope to help other families who are grieving by showing nontraditional ways to honor loved ones.”

Matt Robinson is a freelance writer and author of “Lions, Tigers and … Bulldogs: an unofficial guide to the legends and lore of the Ivy League.” Email: [email protected]

Orbisculate: How a made-up word became a way to honor a father lost to Covid