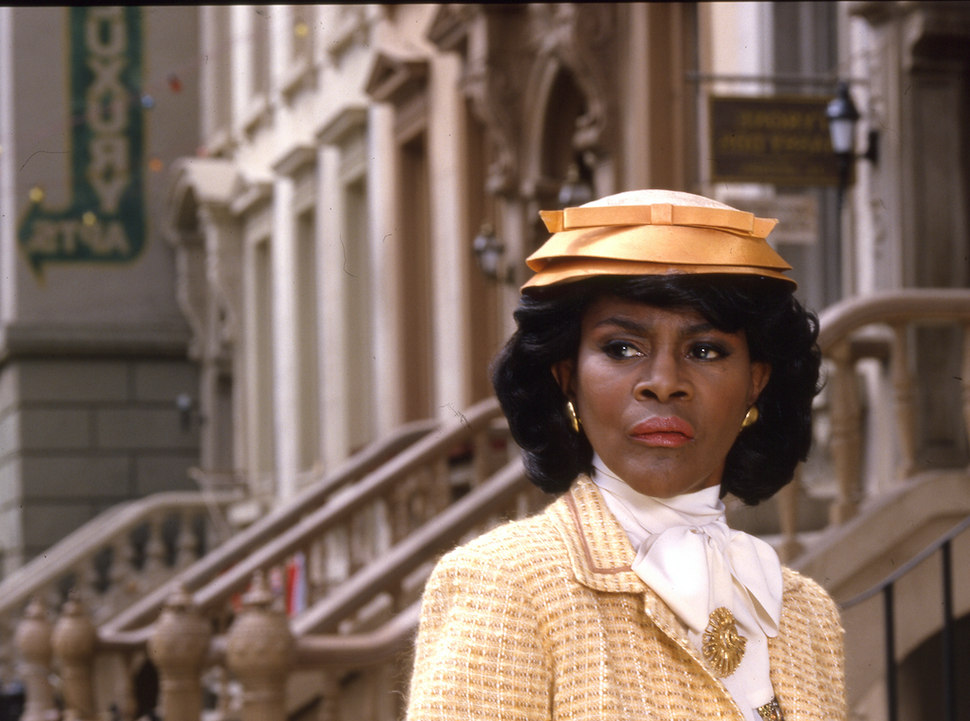 The actress Cicely Tyson, who died on Jan. 28 at age 96, was justly celebrated for her roles honoring African-American experiences in “Sounder” (1972), “The Autobiography of Miss Jane Pittman” (1974), and “Oldest Living Confederate Widow Tells All” (1994), among others. But less has been said about her early work with stellar Jewish performers, and how that may have impacted her fight for civil rights.

Tyson was born in Harlem to parents originally from Nevis in the West Indies, where traces of a venerable community of Sephardic Jewish origin are still visible.

One of her first screen appearances was in “The Last Angry Man” (1959), the final film of the Yiddish theater and film star Paul Muni (born Frederich Meshilem Meier Weisenfreund).

The film was directed by Daniel Mann (born Daniel Chugerman), with a screenplay adapted from a novel by Gerald Green (born Greenberg). Green would later write the teleplay for “Holocaust,” the 1978 TV miniseries.

“The Last Angry Man” is about Dr. Sam Abelman (Muni), an old general practitioner who stubbornly tends to ailing people in a decayed neighbourhood. Tyson had a brief uncredited role as Girl Left on Porch, one of the underprivileged denizens cared for by Sam Abelman.

The film includes some Yiddish dialogue between Muni and Luther Adler, scion of the Yiddish theater family, as a fellow physician, Max Vogel. There is also additional Yiddishkeit from Solomon J. Gottesman as Rabbi Piltz and a cameo appearance by Elimelech Solomon, identified in Jonathan L. Friedmann’s “Jewish Los Angeles” as cofounder of Solomon’s Bookstore, opened as the first bookshop of Hebraica in LA in the 1930s.

So perhaps it was not entirely unexpected that in a 1963 episode of the TV police series “Naked City,” Tyson was cast in the role of a Yiddish-speaking secretary.

The plot is about murder and mayhem among Native American construction workers in New York involving the Otsego and Mohawk tribes.

The setting was conceivably inspired by Edmund Wilson’s 1959 reportage, “Apologies to the Iroquois,” later published in book form. The teleplay was written by Alvin Sargent (born Supowitz, of Russian Jewish origin) and Ernest Kinoy, who survived a slave labor camp in Germany where he was sent as a Jewish prisoner of war during WWII.

Kinoy was credited on this occasion as B. Schweig, an allusion to “Bontshe Schweig” a tale by I.L. Peretz, the Yiddish author.

Tyson’s character extends the Yiddish aura when she repeats the punchline of a Yiddish joke when speaking to homicide investigators. A Jewish office colleague had previously cited the same line, meaning “You can get killed that way,” in reference to the struggle atop a construction site that led to the murder.

The relevant words spoken in Yiddish were later transliterated by Rabbi Elliot B. Gertel as part of an online analysis of the show, as “du kenst krig’n g’harg’t azay.”

Such attention to detail in performance was typical for Tyson. Yet for some time, she was obliged to hold a day job at a social services agency before making her mark in showbiz. Her careful preparation and inspiration eventually led to her being discovered by the American Jewish producer David Susskind.

It featured appearances by Brooklyn-born Will Lee, who would later gain fame as Mr. Hooper on “Sesame Street”; John Randolph (born Emanuel Hirsch Cohen), of Russian and Romanian origin, an actor who survived the Hollywood Blacklist during the McCarthy era; and Salem Ludwig, another blacklisted performer who is remembered for playing the attorney Solomon Rabinowitz in an episode of “All in the Family.”

So by the time Tyson starred in the movie “A Man Called Adam” (1966) with Sammy Davis Jr., who had converted to Judaism five years earlier, she had been exposed to Yiddish, as well as American Jewish, acting traditions.

“A Man Called Adam,” about the tsouris of a jazz trumpeter, was directed by Leo Penn, of Russian and Lithuanian Jewish origin. In the movie, her character offers advice to Sammy Davis Jr.’s character: “Save your heroism for something important!”

This pithy counsel prefigured an aphoristic TV script by the American Jewish author Norman Corwin, “Two Gods on Prime Time” (1972). In it, Tyson portrayed Venus, the Roman goddess of beauty, in the guise of a talk show guest.

No less exalted was an appearance by Tyson in “The Stars Salute Israel at 30” (1978), a TV special also featuring Barry Manilow, Daniel Barenboim, and, of course, Sammy Davis, Jr.

The gala was executive produced and co-written by James Lipton, whose father Lawrence was a columnist for the Forward. Feverish preparations reportedly hit a roadblock when Streisand decided to sing “Hatikvah” after the scheduled chat with Golda, but had never learned the words or music to the Israeli national anthem.

So even before Tyson married the jazz virtuoso Miles Davis in 1981, after an intermittent courtship starting in the 1960s, she was a strong and visible ally of Jewish friends and colleagues.

As has been documented by jazz historians, Davis himself delighted in influential Jewish associates, such as the alto saxophonist Lee Konitz, who died of COVID-19 complications last year, and vibraphonist Teddy Charles (born Cohen).

Miles Davis even displayed surprising amiability early on with the TV host and comedian Milton Supman, who performed under the name Soupy Sales. Davis was a guest six times on Supman/Sales’ late night variety show, “Soupy’s On.”

So Tyson’s relatively late career appearance in 1997 in a crime film “Hoodlum,” in which she plays a Harlem crime boss opposing Jewish Mafiosi, could scarcely be interpreted as anything more than a fictional confrontation.

Tyson’s character is attacked in the film by marauders associated with the gangster Dutch Schultz (born Arthur Simon Flegenheimer). She emerges triumphant from the challenge.

During the long triumph of her career, Tyson followed her own advice and saved her heroism for something important: representing African American experience with unsurpassed talent, possibly enriched by observing countless Jewish actors.