Did the Bernie meme become sexist? 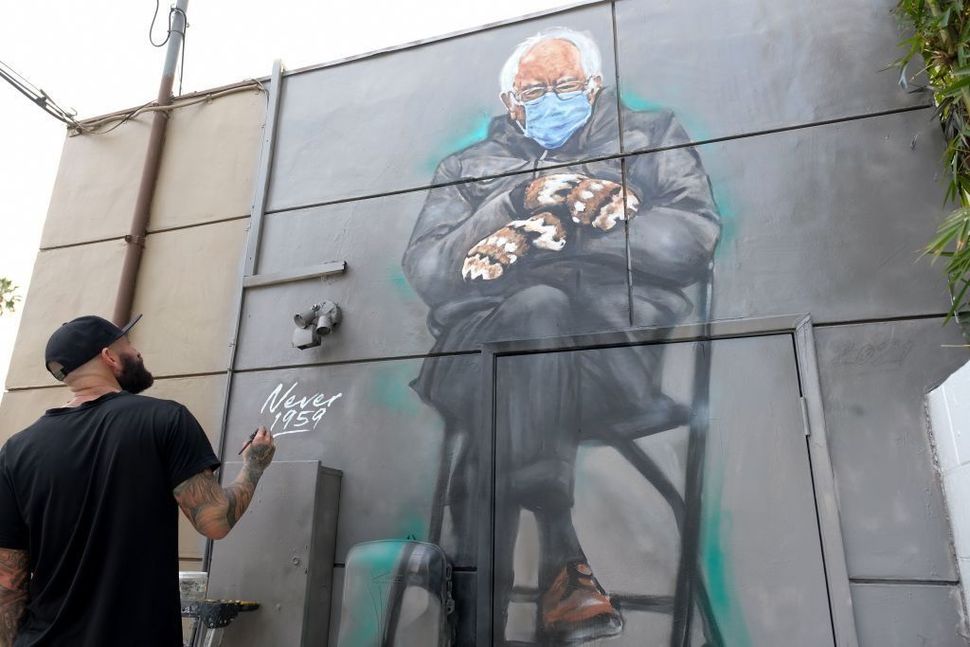 You know the image: the mittens, the huddled posture, the flyaway white hair, the manila envelope. At this point, the iconic picture of Bernie Sanders at Joe Biden’s inauguration has been burned into your brain with the force of a thousand memes. Collectively delighted, the internet edited him into photos, curated outfits based on his knitwear and even made a Google Streetview widget allowing users to put Bernie anywhere in the world.

But nothing good can exist on the internet for long, no matter how wholesome. In this case, Twitter began to complain about Bernie’s unenthused attitude. “Ice cold feminist take: I love Bernie, really I do, but sir: emotional labor is not beneath you. Not feeling it? F*cking pretend for one minute, like [most] women do every minute,” tweeted Amelia Hoover Green, a politics professor at Drexel University.

Others complained that Bernie was stealing attention on a day that should have been about Kamala Harris, the historic occasion of a woman of color sworn in to the vice presidency. Comments complained that his lack of attention to his dress was disrespectful, or saw in his sullen look the sign of a bad sport who was still angry to have lost the Democratic nomination to Biden. How like a man not to feel pressure to smile at a historic occasion (not that you can see Bernie’s mouth under his surgical mask).

I’ll admit the Bernie memes are funny BUT his openly grumpy disposition during a very historic moment for women and particularly women of color speaks volumes to me.

The backlash against the backlash was just as inevitable. Complaints about the white neoliberals and girlboss feminists filled Twitter.

“Lads, is it misogynistic to be cold in winter,” asked one tweet. Others jumped to his defense from a policy perspective, pointing out that the senator has long fought for progressive policies that protect women.

There’s a seed of truth to the original complaint — men aren’t subjected to the same scrutiny; they don’t have to walk the same fine line as female politicians who must be both beautiful and strong without being shrill or shallow or even old. While we can’t know for sure, it seems certain that Hillary Clinton, who was pilloried for nearly everything she said or wore or did during her 2016 campaign, would not have become a beloved meme for slouching in a utilitarian coat. It can feel unfair to compare the effortless adoration Bernie receives to the treatment of Clinton or Elizabeth Warren.

But to have Bernie bear the brunt of responsibility for patriarchal expectations of public-facing women seems equally unfair. He has long supported women and people of color with his policies, and it is unlikely he made a tactical choice to draw attention from the historic occasion of Kamala’s ascension to the vice presidency. He is simply naturally suited to the meme form.

As the internet feverishly began to photoshop Bernie into pictures, he was oblivious, sitting in his assigned place at a ceremony to which he was invited, huddling against the cold — not unlike fellow Brooklyn Jew Janet Yellen, who was similarly huddled in a huge coat and lap blanket, equally uninterested in performing for the cameras.

Yellen did not become a meme, nor did she inspire criticism for her lack of visible enthusiasm. She is, of course, far less famous than Bernie and did not recently run for president. However, those who noticed her outfit similarly enjoyed it. And, notably, despite being a high-ranking woman in the public eye, she did not get criticized for being, if anything, even more bundled than Bernie.

The feminism that drives a pile-on over Bernie because of his mittens is the kind of feminist hot take that gives women’s rights a bad name. It implies that feminism means everything women do — including smiling when they don’t want to and wearing uncomfortably impractical clothing — should become the norm. But the goal of feminism is to increase women’s rights, not decrease men’s. No one should have to wear stilettos in the cold.

Little can exist on the internet, particularly on Twitter, without being torn to shreds. Something about the platform breeds cynicism, and people often get popularity points for incisively cutting down someone else, particularly a public figure, if they nail the tone and timing. Outrage drives shares and retweets. In this case, more hay was made off the backlash to the backlash, but the topic still drove traffic.

This is not the first time Bernie has gotten in trouble for his grumpiness. During his campaign, his tone was heavily policed and he was often accused of yelling, especially after the Democratic debates. Jews on Twitter leapt to his defense, arguing that his argumentative tone is just how Brooklyn Jews talk — many even said they found Bernie’s voice homey and nostalgic, evoking memories of grandfathers and uncles and dinner table conversations. The accusation of abrasive Brooklyn Jew played into problematic antisemitic stereotypes, and Bernie’s grumpiness easily fits a similar genre.

There is, perhaps, something to be said about why Bernie so delights the internet in a way few women do, and why we delight in his memes. There is certainly sexism at play in how we treat our male and female politicians. But the responsibility for that lies with us, the creators and sharers of memes, the members of society. We are the ones who make things go viral. In any case, I’d bet Bernie barely knows what a meme is.

Did the Bernie meme become sexist?