Can an American Jew capture life in the West Bank? Debut novelist Rebecca Sacks is still figuring it out 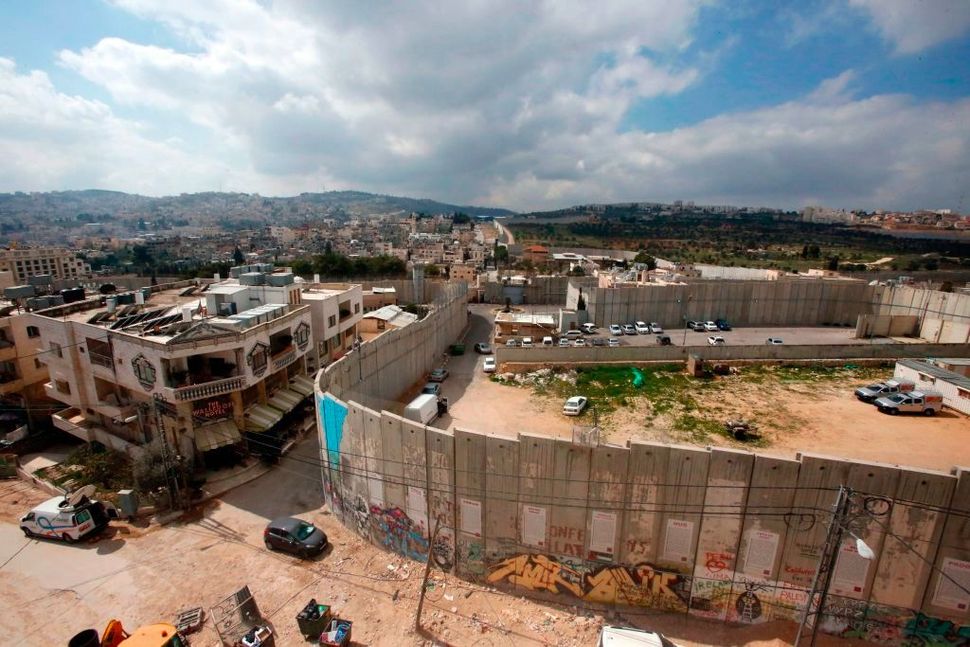 An aerial photo of the separation barrier in Bethlehem. Image by Getty Images

The author Rebecca Sacks is very interested in Janus words.

Named for the two-faced Roman god, Janus words contain two opposite meanings: One can use the word “cleave,” for example, to signify cutting something apart or binding two things together. Hebrew is rife with Janus words, Sacks told me over Zoom, rattling off examples with the ease of a diligent ulpan student. But the linguistic concept is more than a matter of wordplay. For her, the tendency of hidden meanings to complicate stated ones is an apt metaphor for her experience living in Israel, where she both fell in love with Jewish practice and became invested in the fight for Palestinian self-determination.

“My life in Israel and my glimpses of life in Palestine always seemed to be shadowing each other,” said Sacks, a recent graduate of the MFA program at UC Irvine with a hopscotch professional background that includes stints attending divinity school, researching Persian coins at Jerusalem’s Israel Museum, and writing for Vanity Fair. “Any time I was inside a moment, during a religious or nationalist holiday, I was simultaneously imagining it as someone who was excluded or erased by this narrative.”

Clashing feelings of absorption and alienation lie at the heart of Sacks’s debut novel, “City of a Thousand Gates.” That mystical title doesn’t quite do justice to the book, a chronicle of life in Jerusalem and the West Bank that shines a harsh light on the corrosive nature of the occupation. Detailing the power disparity between the Israeli state and the Palestinian territories it controls are 28 different narrators, among them Hamid, a Palestinian college student who sneaks into Jerusalem to do construction work; Meir, a professional soccer player from the settlement Gush Etzion; Shibi, his teammate, a Palestinian resident of East Jerusalem; and Samar, an academic whose career is circumscribed by Israeli bureaucracy.

Though they inhabit vastly different worlds, these narrators are all connected to or touched by a pair of high-profile killings: After a 14-year-old girl is fatally stabbed in a West Bank settlement, a mob of young Israeli men beat a Palestinian teenager into a coma. The fictional events in “City of a Thousand Gates” are not unlike the real atrocities that set off the 2014 Gaza War. At the time, Sacks was living in Jerusalem, often traveling to Bethlehem to visit friends whom she credits for enabling her to write about Palestinian life in the West Bank.

Sacks’s ambitious debut required her to inhabit experiences vastly different from her own. To do so, she enlisted help from various sources, sending passages about IDF reserve duty to Israeli friends and hiring a Palestinian graduate student to read and critique segments on West Bank life. Still, embedded in the novel is a critique of its very project, a sense of doubt that outsiders can add much to the Israeli-Palestinian discourse. Among the many narrators are two Western foreigners: Vera, a German journalist covering the killings, and Emily, an American hipster married to a right-wing Israeli. Arriving in Israel with lofty peacemaking intentions, both women find themselves making moral compromises. Vera’s zeal for public service journalism becomes inextricably linked to her desire to make a name for herself, while Emily ditches her vague liberalism in favor of a stylish lifestyle in Jerusalem’s upscale Rehavia neighborhood.

Sacks moved to Los Angeles in 2019 after completing her MFA. She loves the city’s afternoon light and rolling hills — “everything people do talk about” is true, she told me — but she’s also self-aware about its stereotypes. At one point in our conversation, she laughed at herself for using the word “stoked:” “Too long in California!”

Speaking by Zoom from the apartment she shares with her dog Pupik, Sacks talked about working through the pandemic, writing about violence and criticizing herself through her characters. The following responses have been edited for length and clarity.

Her pandemic routine (or lack thereof): I always thought that all I wanted was for everyone to leave me alone while I write. Now that I have that, I’ve found that having some company is quite nice. I try to get up at seven to take Pupik for a walk, but I wish I got up earlier — not for the flex, but because it’s such a good time to write. My thoughts are so much less crowded, I offer myself so much less resistance as a writer in the morning. The editor in me isn’t awake yet, so i can just generate material. I’ll make some coffee and try to get in an hour of writing uninterrupted. Then I’ll take Pupik for her walk; I imagine she’s reading the newspaper when she sniffs around. Then I come back and I try to write a little more. I cling to my mornings, because for me that’s the heart of my writing life. 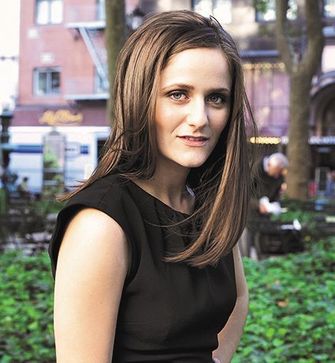 On making writing real: A technique I’ve been leaning on is making the process of generating material super physical. I write longhand in the first draft, often sentence by sentence on these little sheets of paper, and I pin them on a clothesline on the wall. I’m physically moving with the ideas, they’re not just trapped in my computer. That’s always been important to me, but especially so now when my family life, my love life, my religious life is all on the screen. Then I type it up and print everything, and I cut out each paragraph and tack that up on the wall.

In grad school when I was writing the novel, this setup with the clotheslines and mini pins was in my room, and I would wake up in my own brain, in my own book. The effect is startling. I’m dating this awesome woman, and when she came over the first time I was terrified, because I hadn’t taken down my weird thing and she was going to think she walked into a serial killer’s den.

What she needs to work: The absolute basics are a table with a chair and a room with a door. I cannot work in a cafe; writing to me has always felt a little obscene. And I like to have oddities around me. I collect stones and shells, and I kill and revive plants. 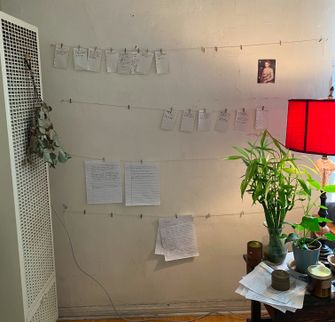 Portions of a work in progress hang from a clothesline in Sacks’s Los Angeles apartment. Image by Rebecca Sacks

The friendships that shaped her novel: It was a horrible summer, a lot of death. It was during Ramadan, and as we were rushing towards atrocity I realized I’d never been in a Muslim home. I didn’t know what Ramadan was, and I wasn’t going to find out by going to ulpan. So I reached out to a tour guide I knew, who goes by Caesar, and asked him, “Do you know anywhere where I could participate in the iftar meal? Do you know any mosques that have open iftar?” Such an American question. He was like, “Absolutely not, come to my place.”

I met his son and his daughter, Hadeel, and ate at their table. It could have ended there — like, checked that box. But Hadeel and I were very similar, and I made arrangements to go back and see her again. Her young son and I became very attached; we played soccer, he schooled me. Being in their home, feeling the rhythms of their home, made me see the constant pressure exerted by the occupation. You can feel it in everything: In whether your time is your own, in the way you can and cannot plan things, in the impossibility of the sea. I’ve gone to Hadeel and her family more times than I can count. Only once have we met on the other side of the wall.

On writing violence: I started writing the book before I got to UC Irvine, but I was there when Trump won the election. That was the week I started writing the chapter that would become “Salme Abu-Something,” from the perspective of Meir, a professional soccer player who participates in the mob beating of a 14-year-old Palestinian boy. It was so difficult to write. Writing violence when the writing somehow comments on the violence, rejects it or understands it as horrific, that is hard work but doable. Writing violence from the point of view of a character that thought it was justified and enjoyed it, is devastating — and to have to go about your day after, grading student papers and talking with my roommate about which vacuum we were going to buy.

Myths she’s writing against: There are so many narratives that were important for me to resist and reject. For example, narratives of a symmetrical conflict when in fact there’s a disparity in power that shapes the material reality of each person in different ways. Some of those narrative lies Vera rejects, some she participates in.

On writing outsiders while being one: I had to pull in the criticism, because it was very easy to see myself in those two women. I didn’t want to make any character an outlet for my own self-criticism. But I think I did want to provide a mechanism for the characters in the book to resist me.

Her recommended reading: I would very strongly recommend Adania Shibli’s “Minor Detail.” When I read her work, I can feel the weight and the fracturing pressure that the occupation puts on the humans living under it. If you’re going to read one book this month, read that, not mine.

Can an American Jew capture life in the West Bank? Debut novelist Rebecca Sacks is still figuring it out