The trippy, far-out artist who refused to support the Nazis 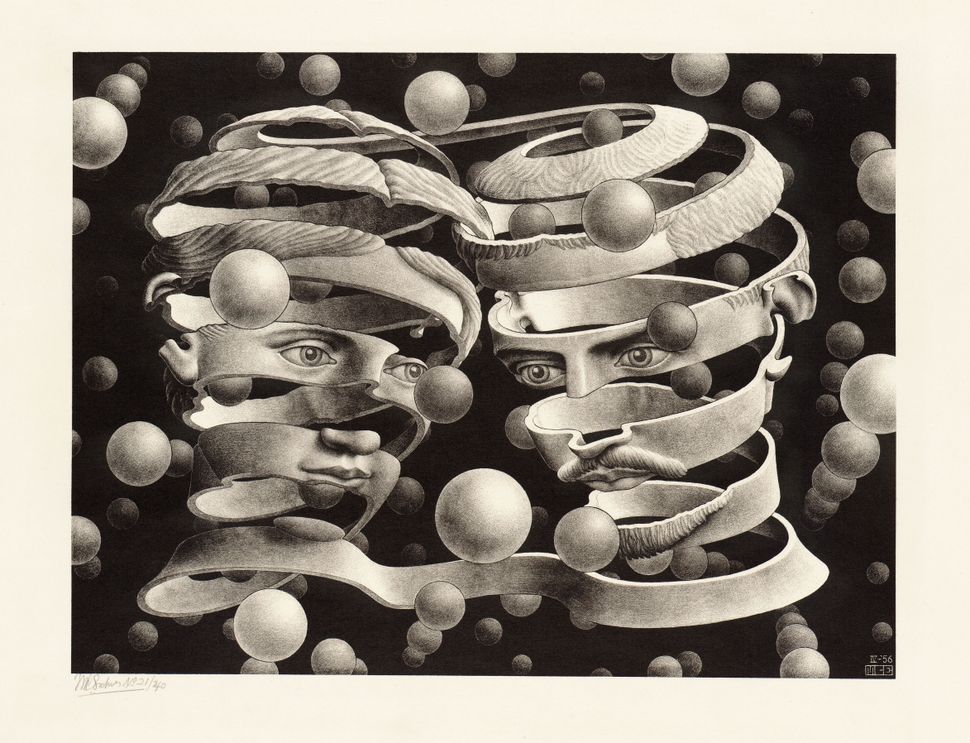 Day and Night: M.C. Escher’s work is the subject of Robin Lutz’s documentary ‘Journey to Infinity.’ Courtesy of The M.C. Escher Company

In Robin Lutz’s intriguing (yet in the end incomplete) documentary, “M.C. Escher: Journey to Infinity,” the iconic Dutch graphic artist (1898-1972), emerges as a complex and entertaining amalgam. He is an intellectual, a curmudgeon, and a tormented artist twisted this way and that over what he perceives to be his own inadequacies.

Lutz evokes Escher’s psyche and the larger world he inhabits through his diaries, letters, lectures and other written musings. “I fear that there is only one person in the world who could make a really good movie about my prints: myself,” Escher wrote to an American collector of his work in 1969. And Lutz is allowing him, metaphorically speaking, to do just that His words are voiced by British actor Stephen Fry who is by turns introspective, amused, and/or enraged. There are also interviews with Escher’s sons, George and Jan. George vividly recalls the smell of his father’s studio — and the musician, art collector and art book publisher Graham Nash of Crosby, Stills & Nash — proclaims that Escher’s greatest period of recognition is yet to come. Old family photos and archival footage of the era (including chilling scenes of a bellowing Mussolini and Nazi soldiers invading Holland) are interspersed throughout.

So too are samples of Escher’s psychedelic and meticulously rendered woodcuts, lithographs and other black and white print work. Escher plays with dimensionality and repeated visual motifs. In one work, a series of tightly connected, stylistically drawn identical birds in flight are repeated across the page until they morph into fish. Another signature piece features staircases that either ascend or descend depending on your point of view. The work — heady, fantastical, replete with optical illusions and a touch of sci-fi — is not too far removed from a nightmare.

Escher insists he was closer to a mathematician than an artist, though at the end of his life, paradoxically his most successful period, he felt he was neither. Incorporating 3D animation, Lutz illustrates how Escher visualized an idea and brought it to fruition. Escher says he would have loved to animate his own work, but suspected it would be of no interest to anyone, short of himself.

Throughout his life, he was dumbfounded and at, at times, irritated by his popularity among counterculture youth. Their hedonistic, druggy lifestyles awash in praise of the irrational flew in the face of his own cerebral sensibility. The fact that they felt free to co-opt his designs on placemats, posters and other objects without his permission didn’t help. 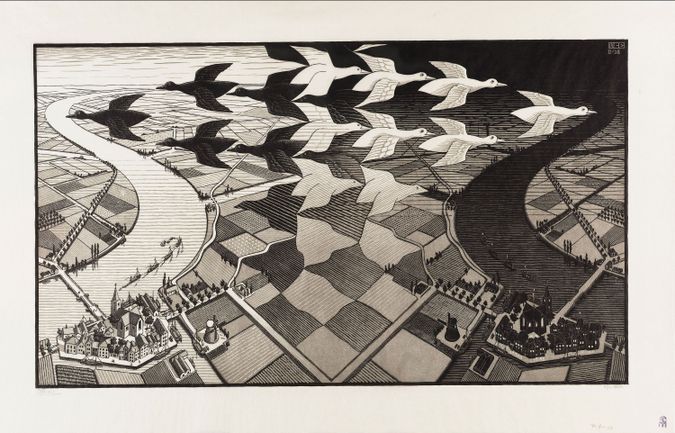 Day and Night: M.C. Escher’s work is the subject of Robin Lutz’s documentary ‘Journey to Infinity.’ Courtesy of The M.C. Escher Company

Escher was raised in a wealthy, high-functioning family, and he was educated in a posh seaside boarding school. Still, he was an unhealthy, overly-sensitive child who never felt up to snuff, especially compared with his high achieving classmates. He found solace in drawing.

In his late teens, he matriculated into the Haarlem School for Architecture and Decorative Arts with his sights set on being an architect. His teacher, graphic artist Samuel Jessurun de Mesquita, a Jew who played a significant role in his life, strongly urged him to switch to the graphics art department.

After a number of years spent in school (it’s not clear if he graduated) he launched his artistic career, living in whatever regions he believed best informed his art. In Italy he was inspired by Tuscany’s natural beauty; in the Alhambra, a 13th century palace in Granada, it was the walls and floors adorned in a progression of geometric mosaic patterns; and in Belgium’s Reformation Churches, it was their cavernous depths, sweeping heights, and figurative endlessness that played a central role in his art. So too, the rousing organ music, most pointedly Bach’s liturgical compositions. These inspired him to master his craft, while reminding him of what he’d never achieve. Others wanted to create beauty he says, but he wanted to create “wonder.”

For much of his career, his father supported him, even after he had his first major exhibit in 1924, the same year he married Russian refugee Jetta Umiker who, along with her well-heeled parents, fled their native home during the Bolshevik Revolution. Still, his reputation was growing.

Escher was also a man of principle. When the Nazis invaded Holland — and his old friend and mentor Mesquita was spirited away by the SS in the middle of the night — the horrors were driven home to him on a personal level. He describes the experience of wandering through Mesquita’s ransacked apartment after the abduction. Mesquitta was killed in Auschwitz in 1944.

Escher refused to sign with a cultural registry that supported the Nazis. As a result he was not allowed to exhibit his work and during that period he made no money.

In later years his fortunes changed, especially in the aftermath of a 1951 Time magazine profile, which brought him international attention. His trippy work became so hip Mick Jagger asked him if he could use one of his images on an album cover. Escher found the request altogether too familiar. “Please inform Mr. Jagger that I am not ‘Maurits’ [his first name] to him, but, respectfully, ‘M.C. Escher.’”

Lutz does an exemplary job in illustrating Escher’s artistic process and ongoing legacy, perhaps most pointedly in his interview with Nash who attributes his interest in art to Escher.

Nonetheless, the lack of commentary by fellow artists, curators, or art historians is a gap. The film desperately calls out for some scholarly discussion. In the end the viewer is still left with questions about where to place Escher, how to interpret him, and, most relevant, to understand what makes him significant. Some gawker at an Escher retrospective muttering “far out” doesn’t cut it.

The trippy, far-out artist who refused to support the Nazis