That time Mary Wilson played a ‘Supreme Yenta’ on stage 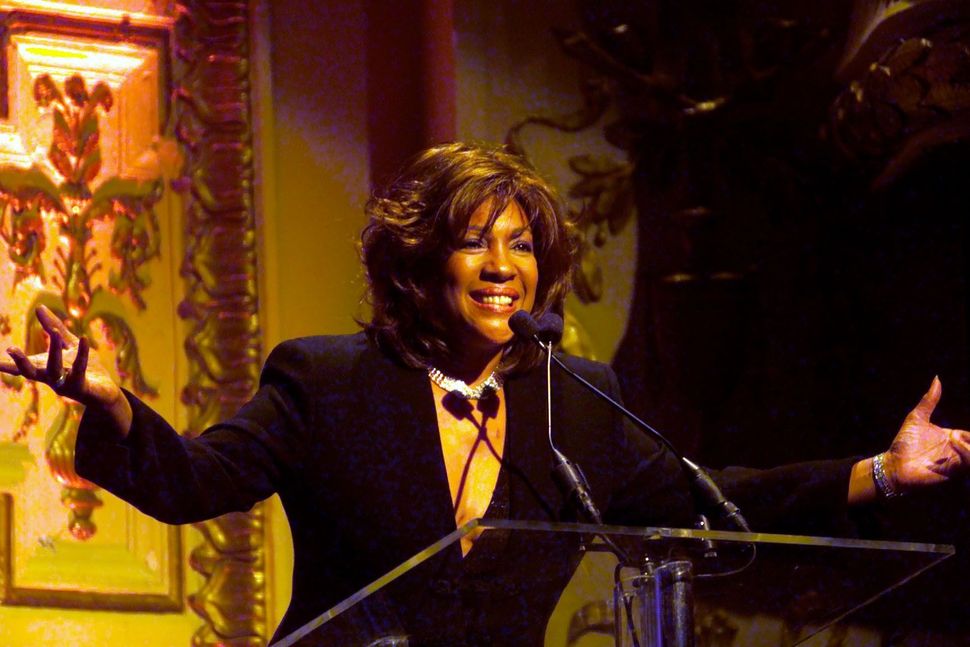 Mary Wilson, who died on Feb. 8, 2021 at the age of 76, is being hailed throughout the world today for the musical legacy she leaves behind as a member of the Supremes, the female vocal trio that ruled the airwaves from the mid- to late-1960s, along the way bringing the R&B sounds of Detroit’s Motown to a crossover pop (read: white) audience. Along with the trio’s other co-founders, Florence Ballard and Diane (later Diana) Ross, Wilson helped break down racial barriers through the Supremes’ joyful sounds and glorious style. After Ballard and Ross had left the group by 1970, Wilson persevered, fronting the Supremes until the ensemble finally disbanded in 1977.

But that didn’t mark the end of the road for Wilson. Freed of the constraints and expectations of being a member of the Supremes — who just last month marked 60 years since signing with Motown — and singing only their hits, Wilson went on to pursue a solo recording career and stretched her creative muscles on page and stage. In 1986, Wilson published her first autobiography, “Dreamgirl: My Life as a Supreme,” which became a New York Times bestseller; the title was an homage to “Dreamgirls,” the 1981 hit Broadway musical and later a 2006 film that told the story of a singing group very much like the Supremes.

Wilson also found her way back onstage as an actor in both musical and dramatic roles, including a six-week stint in 1996 in the Off-Broadway show, “Grandma Sylvia’s Funeral,” at the Soho Playhouse in Manhattan. Written by Amy Lord Blumsack and Glenn Wein, who also directed, the play was, according to the trade publication Variety, a “highly improvisational and fun story of a Jewish funeral gone wrong.” Wilson played the role of Aunt Marlena, who, in the wake of the title character’s passing, vied with others for the supreme role of family matriarch.

Speaking to The New York Times, director Wein said about casting Wilson, “Here is the chance to express something new in the show without changing it… I decided that we shouldn’t change the text for the actor. You don’t have to be white to be Jewish or to play a Jew. It’s a religion, and there are a lot of black Jews. My show will reflect that.”

Wilson herself had another take on why she was totally appropriate to tackle the role of a Jewish “super yenta.” She told The Times, “I obviously feel great about playing this part. Many of my friends are Jewish, and I already know a lot of the terminology, words like meshuggenah.”

Aunt Marlena wasn’t Wilson’s only portrayal of a Jewish woman onstage. In 2001, Wilson played the title role in a national tour of “Leader of the Pack – The Ellie Greenwich Story,” a jukebox musical featuring the work of the Brill Building songwriter, whose mother, Rose Greenwich (née Baron), was a Russian-Jewish department store manager. Greenwich’s catalog of hits included “Be My Baby,” “Da Doo Ron Ron,” “Do Wah Diddy Diddy,” “River Deep – Mountain High,” “Christmas (Baby Please Come Home)” and “Leader of the Pack,” many co-written with her husband, Jeff Barry (born Joel Adelberg in Brooklyn, N.Y.). Many of these hits were the sort of early-1960s girl-group numbers that the Supremes, with their more stylish, adult appeal, would supersede both creatively and on the pop charts.

Seth Rogovoy is a contributing editor at the Forward. He frequently mines popular culture for its hidden Jewish stories. You may get in touch with him at seth@rogovoy.com

That time Mary Wilson played a ‘Supreme Yenta’ on stage