Trump’s impeachment lawyers are at war with language itself 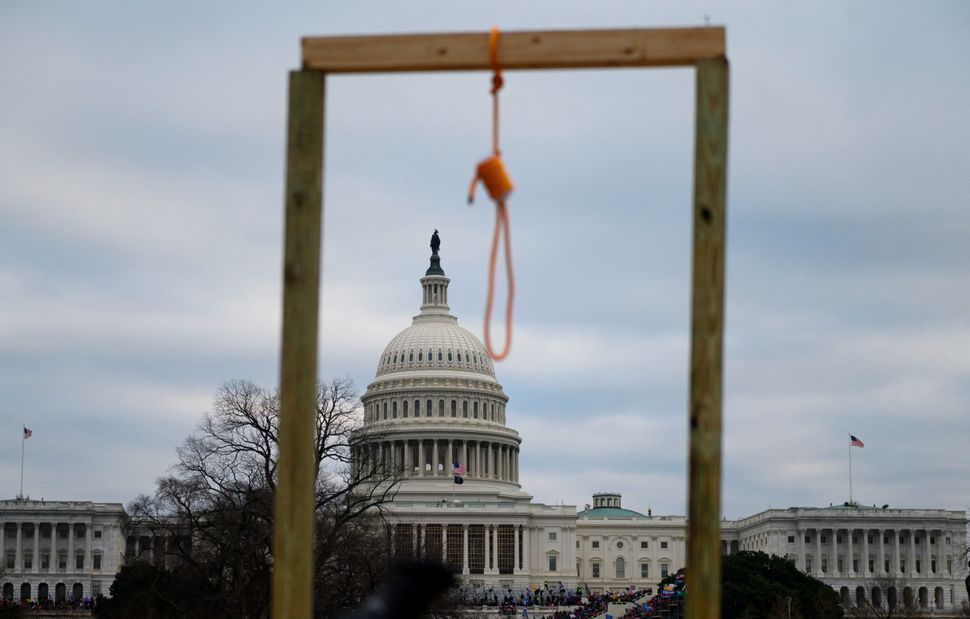 Gallows on the Capitol By Getty Images

The image of a Capitol custodial worker who had to wipe feces and blood off the walls in the aftermath of the riot was a visceral and unforgettable part of today’s impeachment proceedings, and it wiped away any notion that former President Trump’s rhetoric and the damage it caused was merely metaphorical.

By highlighting the experience of custodial workers in front of the nation and the world, Rep. David Cicilline of Rhode Island, one of the House impeachment managers and a former public defender and two-time mayor of Providence, Rhode Island, made the essential point that the Capitol attack hurt more than Congress — it endangered and demeaned the workers who make democracy work.

Cicilline specifically noted the janitorial and custodial staff, along with food service workers. And he told it like it is — many of these workers are Black, and the horror of asking longtime Black workers to clean up the feces and blood of white nationalists in the middle of a pandemic must not be lost on any of us.

“Everyone in society needs to understand what we’re up against,” Yamiche Alcindor of the PBS Newshour said this afternoon, noting the racism in the riot and the continuing presence of violent white nationalism in the United States.

Importantly, as Cicilline catalogued the effect on workers, he included journalists, who work in the Capitol on a daily basis and who were on site for the certification on Jan. 6.

Cicilline noted that journalists have been repeatedly targeted by Trump and his supporters and were in mortal danger — for instance, a CNN reporter who manages a staff of 14, including two people on crutches — who had no choice but to run for their lives, injured or not.

Journalists have known this for a while and were therefore very skeptical of the “figurative speech” argument that has been raised by Trump’s supporters. Reporters who have weathered physical threats and harassment know what “metaphorical” language like “enemy of the people” means in real life. So do scientists like Dr. Anthony Fauci, who has endured threats of beheading simply for telling the truth.

The “poetic license” angle by Trump’s lawyers is so absurd, so easy to tear apart, that some reporters have resorted to humor.“Trump team also arguing his call to “fight” was a boxing metaphor by the former host of Atlantic City bouts,” tweeted Geoff Earle, Deputy U.S. Political Editor of MailOnline, and former D.C. Bureau chief at the New York Post.

“Trump’s speech reveals that he used the word “fighting” in a plainly figurative sense,” Trump’s lawyers wrote, as if the former President were some kind of poet.

“The House cannot seriously argue that Mr. Trump’s use of the word ‘fighting’ in this speech incited an insurrection, given this usage; it is not merely couched in the language of simile (“like”) but it describes a position of physical disadvantage; it is far from a prescription for future violent action,” the lawyers continued.

The lawyers’ argument is built on the idea that “like” means “not really; it’s just a figure of speech.”

It’s worth parsing out just how misleading the idea was that Trump’s language said one thing but meant another — and how the dictionary crushes that crappy idea.

It’s an argument that Republicans have used for years; that Trump is taken seriously but not literally. And the feces on the wall showed how untrue and dirty that argument is, and how far Trump is from any poet.

It’s worth parsing out just how misleading the idea was that Trump’s language said one thing but meant another — and how the dictionary crushes that crappy idea.

According to the Merriam-Webster Dictionary, “simile” is a figure of speech comparing two unlike things that is often introduced by like or as (as in cheeks like roses). It is hard to argue that “fight like hell” led to something that was not hell for Congress and those who work at the Capitol. This insurrection ended in murder, maiming, and exposure to a deadly virus.

“Metaphor” means “a figure of speech in which a word or phrase literally denoting one kind of object or idea is used in place of another to suggest a likeness or analogy between them (as in drowning in money),”according to Merriam-Webster.

No. It meant “let’s kill Mike Pence,” as the gallows show. As the video of the screaming mob documents. There’s nothing poetic about attempted murder.

Merriam-Webster explains that “when we use metaphor, we make a leap beyond rational, ho-hum comparison to an identification or fusion of two objects, resulting in a new entity that has characteristics of both: the voice isn’t like silk; it is silk.”

“Like” had nothing to do with the insurrection. Instead, it is what it is. It was what it was. And all of America must face it.

There is video evidence; audio evidence; and testimony of thousands of people who were there and witnessed it with their own eyes.

Wiping the feces of a mob that came to kill, set up a gallows, violently attacked police officers and murdered them, gouged one officer’s eye, used bear spray to blind, and whose presence has so far led to seven positive COVID tests among members of Congress who were forced to hide in crowded conditions, at least 38 positive cases among Capitol Police, and 200 positive coronavirus cases among the National Guard who were called up in response—that’s real. And that’s not “fight like hell.” It is hell. It is attempting to send people from life into death.

“When you see a crime being committed in plain view, you don’t have to wait months before bringing charges,” Rep. Ted Lieu said this afternoon, noting that he is a former prosecutor.

It was a crime. In plain view. No “like” about it, no “metaphor” involved. No graduate degree in poetry needed.

Aviya Kushner is The Forward’s language columnist and the author of “The Grammar of God” (Spiegel & Grau) and the forthcoming “Wolf Lamb Bomb” (Orison Books). Follow her on Twitter @AviyaKushner

Trump’s impeachment lawyers are at war with language itself