What Donald Trump’s acquittal teaches us about empathy and compassion 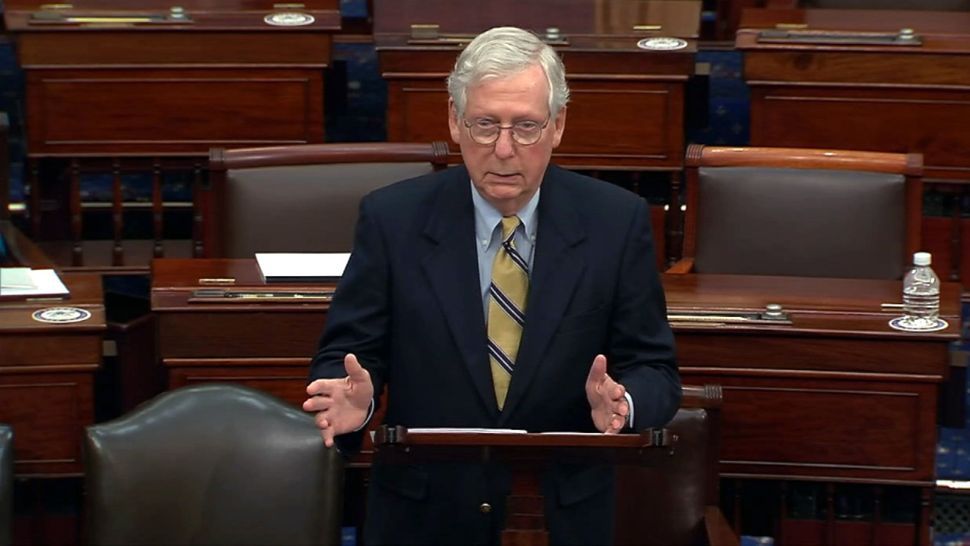 The vote that ended Saturday’s second impeachment trial of former president Donald Trump will have, at least in the short term, clear political consequences for the country. What might seem less clear, though, but no less important, are the philosophical consequences. By their failure to convict their party’s leader, 43 Republican senators have just reminded us that, while empathy and compassion are often confused with one another, there is a deep and oftentimes dire distinction between the two.

For most of us, “empathy” rhymes with “sympathy.” It also brings to mind words like “pity” and “compassion.” But we should beware of these reflexive associations. While philosophers predictably disagree on the details — they are philosophers, after all — they mostly agree that empathy differs dramatically from these other states of mind. This distinction, in turn, helps explain the disconnect between what the senators confronted in the insurrection videos and what they concluded.

As the philosopher Martha Nussbaum suggests, empathy is the word we give to our ability to reimagine someone else’s experience, often those that are painful or distressing. Yet, as any actor trained in the Stanislavski method will tell you, the empathic reconstruction of another’s emotional state of mind does not necessarily mean that we are concerned about that fellow human being. An actor can empathize with a fictional character like Willy Loman, but not feel deeply one way or another about him.

By the same token, I can empathize with, say, real men and women running for their lives from a violent mob, or a policeman wedged in a door while a thug whaled at his head, yet not lose a wink of sleep. Even a torturer, Nussbaum observes, can empathize, but it is the sort of empathy that allows him to find satisfaction in his line of work.

When questioned by reporters after the trial’s first day, several GOP senators acknowledged the videos were “graphic” and “powerful.” One senator, Dan Sullivan of Alaska, remarked that “a lot of us remember from our perspective. But you get different perspectives. So it’s a bad day, no doubt.” But not that bad. The videos allowed Sullivan to reconstruct the experiences of hundreds of colleagues and the police who were trying to protect them. That he also voted to acquit Trump is not a contradiction, but merely a confirmation that empathy is not all that it’s cracked up to be.

On Thursday, one newspaper’s headline announced, Republican senators repeatedly emphasized that the House’s presentation didn’t move them enough to convict.” In other words, the senators could not or would not be moved from empathy to compassion. Rather than the imaginative reconstruction of another’s undeserved suffering, compassion is the visceral response to that same experience. So visceral, in fact, that it prods us to act. We try to do what we can in order to relieve that suffering because try as we might, we cannot help but relate as one vulnerable being to another.

“In the beginning is the relation.” The double meaning to Martin Buber’s famous declaration in “I and Thou” points to both the dilemma we find ourselves in and path to find a way out. Buber reminds us of a truth that governs our lives but almost always goes unnoticed: we cannot use the word “I” without relating it to something or someone else. When it comes to someone else, the “I” must choose between two kinds of relationship: “I and Thou” and “I and It.” The latter is transactional and sees nothing more than objects, while the former is intrapersonal and sees nothing less than fellow subjects. The “I-It” structures empathy, while the “I-Thou” is the stuff of compassion.

In short, compassion happens when the suffering of another afflicts us so deeply that we recognize our shared humanity with the sufferer. This is why the machinery of genocide is almost always oiled by language that casts the targeted population in nonhuman terms. If you depict fellow men and women as “dangerous microbes,” as the Turks did with the Armenians; as Untermenschen, as the Nazis did with the Jews; or as “cockroaches,” as the Hutus did with the Tutsis, you free yourself of the hard work of compassion.

The same is true of “enemy of the people,” a term first coined in Stalin’s Soviet Russia. Much has been made, and rightly so, of our former president use of the word in the months, weeks and days leading up to the insurrection. So, too, of phrases like “human scum” and “dogs” to depict those opposed to his policies. Much too has also been made of the chants and cries of the insurrectionists that copied this language as they hunted for these “enemies” in the halls of the Capitol Building.

But perhaps not enough has been made of the way in which others who have also sworn to uphold the Constitution have used less horrifying, but no less objectifying language to cripple their capacity for compassion. Whether warning against the omnipresent “Antifa” to the ominous communist,” these elected officials have allowed themselves to acquit Donald Trump because they have left themselves off the hook of fellow-feeling. It is unlikely that any of them will reflect on this experience. But it is an invitation for the rest of us to reflect upon it — all the while, as Buber insisted, trying to treat all others as a thou.

What Donald Trump’s acquittal teaches us about empathy and compassion