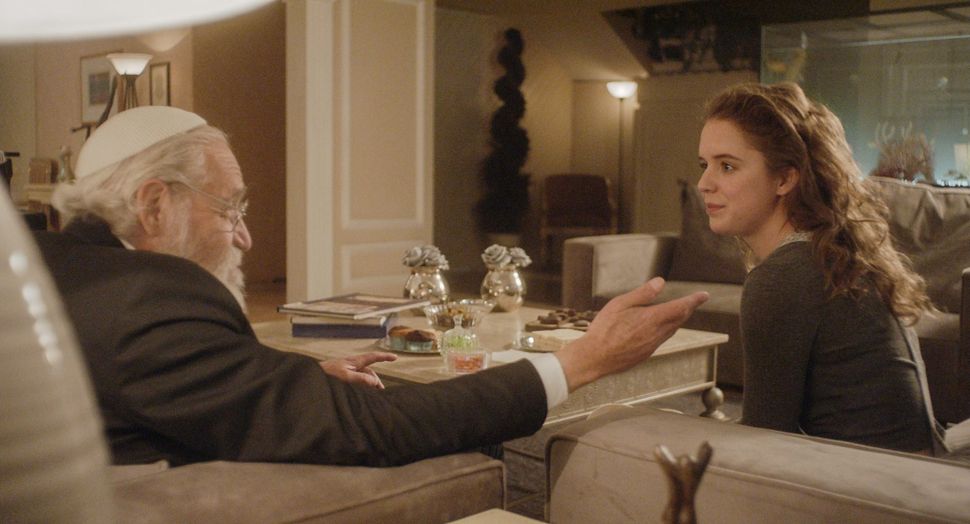 Old World Vs. New: The religious community is called in when a member strays. By Menamesha Films

Set in Mexico City, “Leona” is a coming of age tale that follows a young female muralist who falls in love with a non-Jewish Mexican and winds up essentially disinherited from her own community. The Spanish-language film, which marks the impressive debut of writer-director Issac Cherem — who hails from the tightly-knit, Syrian-Jewish community where his film takes place — touches on marginalization, female agency, immigration and community.

The film opens in a mikveh where a bride-to-be immerses herself in water while her female friends giggle and beam with pleasure. Yet, there’s something oddly unsettling here too—not least the intrusive elements embodied in all these clothed women gawking at their naked friend splashing about. Is the scene joyous or frightening and/or humiliating or in varying degrees all of the above? Among the attendees stands our heroine, Ariella (played by Naian González Norvind, who also co-wrote the script). She smiles dutifully, but can’t wait to escape this sectarian world and change into her jeans and sneakers.

The film’s Jewish characters— consisting of Ariella’s divorced parents and an extended family as well as members of the surrounding Mizrahi community — are not truly ultra-Orthodox. Though they celebrate Shabbat and keep kosher, the married women do not have enormous families or wear sheitels, and they tolerate Ariella’s paint-splattered overalls.

Marriage, however, is non-negotiable and it is assumed that every woman wants to be married to the proverbial “nice Jewish man.” But Ariella is far more devoted to her painting —though curiously enough, the work itself is unclear; it seems to feature a series of circular, non-descript faces. 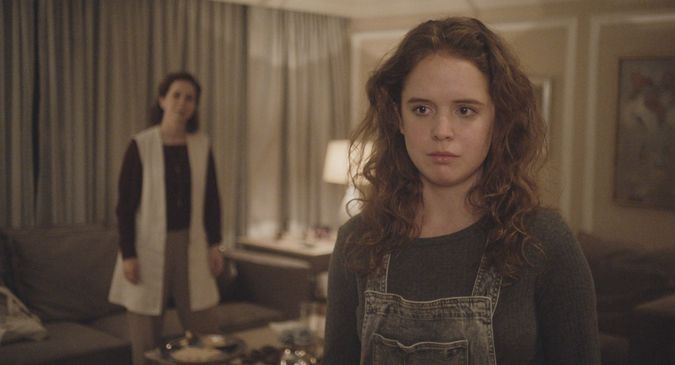 An Artist’s Dilemma: A muralist finds herself at odds with her family in ‘Leona.’ By Menemsha Films

One day, preoccupied with her mural, she encounters a personable young man, Ivan (Christian Vazquez) who expresses interest in the piece. A hot and heavy romance ensues. One suspects that Ivan is her first real boyfriend, and that part of his appeal comes from the fact that he is far removed from her parochial, bourgeois Jewish world. He inhabits a Bohemian galaxy of free-thinking academics and artists. He spirits Ariella to cantinas where they drink excessively and engage in sweaty dancing.

At its core, “Leona,” meaning lioness in Hebrew, is a character study of a young woman drawn to a man because of his “otherness.”

Ariella is enthralled by the scene he has introduced her to, yet on some level feels conflicted. When Ivan says he wants her to introduce him to her family, she finds excuses not to. Clearly, she is fearful of their reaction to him and, by extension, their disappointment in her. But it doesn’t take a leap of imagination to surmise she doesn’t want him to meet and judge them. As much as she’s an outlier in her own community, she’s an outlier in his.

At its core, “Leona,” meaning lioness in Hebrew, is a character study of a young woman drawn to a man for a variety of reasons, his “otherness” heading the list. To what degree she really loves him — or is even capable of loving him — is up for debate.

The family comes down hard on Ariella; her mother threatens to disown her. Ariella has enjoyed a close bond with her and it’s sad to watch that relationship teeter. But there’s no way mom can reconcile herself to Ariella’s new boyfriend who threatens the very fabric of her world, her own identity and efficacy as a mother. She enlists a rabbi and a fixer of sorts to coax her daughter back into the fold. They both remind Ariella about the historic struggles of their community, insisting that the only way for it to survive is through adhering to tradition and non-inclusive unity. Though they are the antagonists, they are never painted as caricatures. Still, there may be audiences who are uncomfortable with the portrayal.

When Ariella and Ivan inevitably break up, she endures a string of dates with Jewish singles who are less than ideal. And even a good relationship falls apart when she learns that her boyfriend has asked her father for her hand in marriage without consulting her first. Worse, her mother is already planning the wedding.

Towards the end of the film, Ariella is completing her mural and, for the first time, we see the striking and original piece; its subject is one exquisitely drawn imposing woman. Ariella, who signs it “Leona” with a flourish, has become the lioness of the film’s title.

But the film’s final image is its most resonant. Recalling the early scene in the mikveh, Ariella is bathing, cleansing herself. But here she is completely alone in her bathtub, submerged in water and fully liberated. The scene is not religious but surely spiritual.