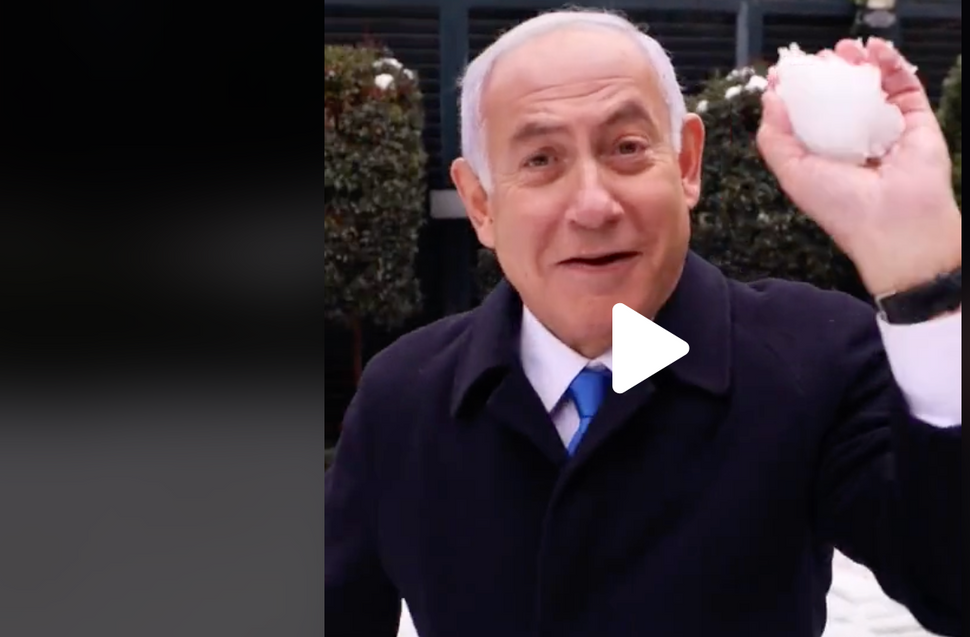 Netanyahu throws a snowball at the camera person. Courtesy of TikTok

Bibi Netanyahu is on TikTok. There are videos of him throwing a snowball into the camera to celebrate Jerusalem’s snowy conditions, or urging Israelis to get vaccinated, though they don’t seem to have caught on too well — while, as an international leader, he has managed to get verified, he only has 217.4K followers, far below even most of TikTok’s more minor stars, who usually are near 1 million. But, to be fair, Bibi has only been on the social media app since December 19; he still could catch up.

It’s an interesting move from a man who does not own a smartphone. In 2014, he was caught on tape ranting about cell phones, calling smartphone users “slaves to your gadgets,” yet here he is, starring on one of the more addictive social media platforms. Of course, the flawless snowball transition effect was likely executed by a staff member.

Bibi is no stranger to social media — or at least his social media managers aren’t. His campaign used Facebook extensively through Israel’s many elections last year, including leveraging a Netanyau chatbot who messaged followers about their vote, technology which was used after the election to gather information about Israelis who remain unvaccinated; Facebook shut the bot down in late January, saying it violated the social media platform’s privacy policy by asking for medical information. The prime minister’s instagram page is also active, though largely filled with formal press shots announcing policy successes and promoting the government.

But the TikToks are a whole different vibe. In the most recent video, the one which caught my eye, Bibi — dressed in a very un-Israeli outfit of a suit and tie under a long, formal black coat — makes snowballs with his bare hands and tosses them at the camera. An editing trick uses the snowball to transition indoors, where the prime minister talks about taking a minute for fun in the Jerusalem snow.

In another TikTok, from late January during Israel’s return to lockdown, the prime minister mutters, in Hebrew, “When there’s no choice, there’s no choice,” as he attempts to buzz his own hair in front of a shaving mirror since all the salons are closed. Despite the buzzing noise of the clippers, no hair can be seen falling.

Now that Netanyahu is on trial for corruption, it may be of greater importance to him that he seem relatable and fun — an everyman instead of a wealthy, removed leader. The corruption trial accuses the prime minister of taking bribes in the form of extravagant gifts, an especially insulting offense against the backdrop of the struggles during the coronavirus. Cutting his own hair paints him as one of the people, enduring the same struggles as everyday Israelis.

Comments on the video don’t indicate he is reaching many Israelis — many are in English and carry greetings, both fond and hateful, from countries such as Indonesia, France, Iran and the U.S.

Netanyahu hasn’t fully disregarded his former style of policy promotion entirely; one video urges Israelis to mask up; another brags about Israel’s success in vaccinating its population, telling Israelis that the whole world salutes them. A third brags about the Abraham Accords, in honor of Christmas.

But mixed in are posts urging viewers to tell him what they’re reading in the comments — a common, basic strategy to increase engagement and visibility on social media; posts with more comments are favored by the algorithm. The top comments on that video, however, are Palestinian flag emojis and exhortations to free Palestine, which may not have been the kind of engagement Netanyahu’s social media team was hoping for.

Despite his resistance to smartphones, Netanyahu has successfully dominated social media in the past few years thanks to his social media team of 20-somethings. But therein lies the problem — according to teens on TikTok, millennials are already hopelessly uncool and 25 year olds are considered “elders.” Bibi’s videos seem hokey and staged, his suits overly formal — unlikely to lure in TikTok’s largely young and secular audience. Even Bibi’s hired youths are too old to sell him.

Mira Fox is a fellow at the Forward. You can reach her at fox@forward.com and on Twitter @miraefox.