Why does this podcast stand out from all the others?

Image by Courtesy of Mermaid Palace

Family members often use that phrase to describe Melanie Barzadeh, the show’s fictional protagonist, even though she’s not really a “good girl” — at least, not by the standards of the Iranian-Jewish enclave in which she grew up. Unmarried in her mid-thirties, Melanie has abandoned her hometown of Great Neck for a not-totally-illustrious career in New York City; is dating but refusing to settle with a much older (and worse, non-Iranian) man; and wants to have a child on her own. Every clause in that last sentence is so distressing to Melanie’s mother, Vida, that she chooses to live in willful ignorance about the basic facts of her daughter’s life.

“Good girl,” then, is less an endearment than a stopgap, a stock phrase employed to conclude a discussion when no real understanding can be reached. Uttered hopefully, dubiously or disbelievingly, it’s a poignant testament to one family’s insistence on imagining an idealized version of its daughter rather than confronting the real woman who exists.

But the podcast isn’t just about Melanie — who, we are often reminded, doesn’t actually exist. Mashihi created her protagonist to reflect a real-life dilemma: She herself is considering single motherhood, but fears having a child out of wedlock will cause a permanent rupture with her parents. Unsure how to proceed, she decides to externalize the conflict, allowing a semi-fictional version of herself to grapple with the expectations of Great Neck. Melanie and Mashihi are not identical, nor are their families; Mashihi rates the podcast’s truthfulness at “six-and-a-half out of ten.” But when Mashihi asks what it means to call someone a “good girl,” she’s examining the ways in which her own parents know (or fail to know) her. When she envisions different ways forward for Melanie, she’s exploring how she herself might depart from her upbringing without abandoning it altogether.

People who listen to podcasts for a living have already dubbed this podcast’s metafictional structure a “breakthrough for the form.” I am not such a person, but I still emerged from the nine episodes of “Appearances” feeling that the previously adequate world of narrative podcasts was hopelessly one-dimension. In part, that’s because there’s just so much sound in the world Mashihi creates. Venetian blinds crinkle in “Appearances.” Jammed car doors rattle. When the fourth wall breaks, as it often does, and Mashihi intrudes to converse with her characters, bricks crumble quietly as if a real barricade is being dismantled. Instead of eminently mockable podcast-speak, in which the narrator delivers every painfully slow line like a sacred prophecy, we hear Melanie’s intimate, aspirated sighs as she sits on the toilet, impatiently waiting for the results of her pregnancy test. If her ringing phone interrupts such a scene, which it probably will, you may find yourself scrabbling around for your own. 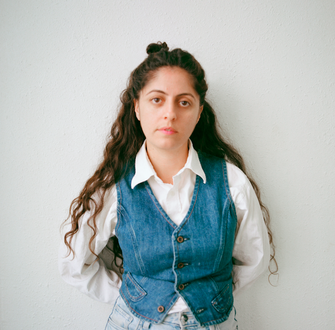 That’s not to mention the characters, most of whom are voiced by Mashihi herself. She plays Jamsheed, Melanie’s blundering father; Bobbak, her dutifully traditional brother; and, most importantly, the relentlessly critical Vida, whose approval Melanie alternately seeks and spurns. (There are some exceptions. Melanie’s ex-boyfriend, Ponch, is voiced by Mashihi’s own ex-boyfriend, the actor Thatcher Keats. When Melanie wants to rehearse a difficult conversation with Vida, she recruits a real-life Iranian mom from a Facebook group for fans of Googoosh, “the Madonna of Iran.”) A Vulture profile of Mashihi noted that while working for NPR shows like “The New Yorker Radio Hour,” she gained a “reputation for extremely good craftsmanship.” Listening to a multilingual family fight in which, despite being voiced by the same actor, each party seems uniquely, individually aggrieved, you can’t help feeling she deserves it.

But “Appearances” is more than its lush auditory landscape. As its title suggests, it’s in large part a podcast about wanting to be seen — and simultaneously dreading it.

Melanie feels her community’s censorious gaze as a constant threat in her life. Encapsulated in her parents’ anxious catchphrase — “People will judge us!” — the threat of neighborly disapproval can make even her most considered choices feel like feckless eccentricities. Case in point: While deciding whether to proceed with using a sperm donor, Melanie eschews family gatherings for fear they’ll curdle her resolve.

Yet while Melanie sees herself as genuinely scornful of convention, her decisions often seem driven by communal norms — specifically, her fear of falling prey to them. At a relative’s wedding, she finds herself alone in front of the bathroom mirror, disgusted with an unflattering dress she chose for the sole purpose of standing out. Here, her defiance seems studious, evidence of her profound inability to envision a future unswayed by her hometown.

It’s Faribah, Melanie’s childhood neighbor, who illuminates the tension between living for community and living to frustrate it. An older, unmarried woman, Faribah is a stock character ubiquitous in portrayals of insular communities. (Her Venetian blinds are the ones that crinkle, usually when she prises them apart to observe goings-on at the Barzadeh house.) Her life is a warning to young women like Melanie: Unless they toe the line, they could end up like her, tolerated but never quite accepted.

At least, that’s how Melanie sees her neighbor, until she finds herself telling Faribah all about her lurching path towards motherhood. When Faribah, unmoved, responds with a confession of her own, Melanie marvels that she’s “not like other Iranian women.” — an instant recalibration that positions them both as outsiders fighting a culture as inflexible as ever. But Faribah won’t have it: “No Iranian woman is like Iranian women,” she retorts. In other words, it’s time for Melanie to stop worrying about how people see her and start doing a little looking of her own.

It’s fitting that Faribah is the first character to break the narrative conceit and address Mashihi directly. “You are a good girl, Sharon,” she says. Until now, Mashihi has more or less tried to disguise her hand in the script, to prevent us from noticing that she is the one uttering the phrase “good girl” over and over again. Now, through Faribah, we remember that this entire podcast is one woman’s internal reckoning. If anyone in Melanie’s world sees her, even for a moment, as she wishes to be seen, it follows that Mashihi is bestowing that gift of recognition on herself.

Which might, after all, be exactly what she needs.

Why does this podcast stand out from all the others?