The secret Jewish history of Mars 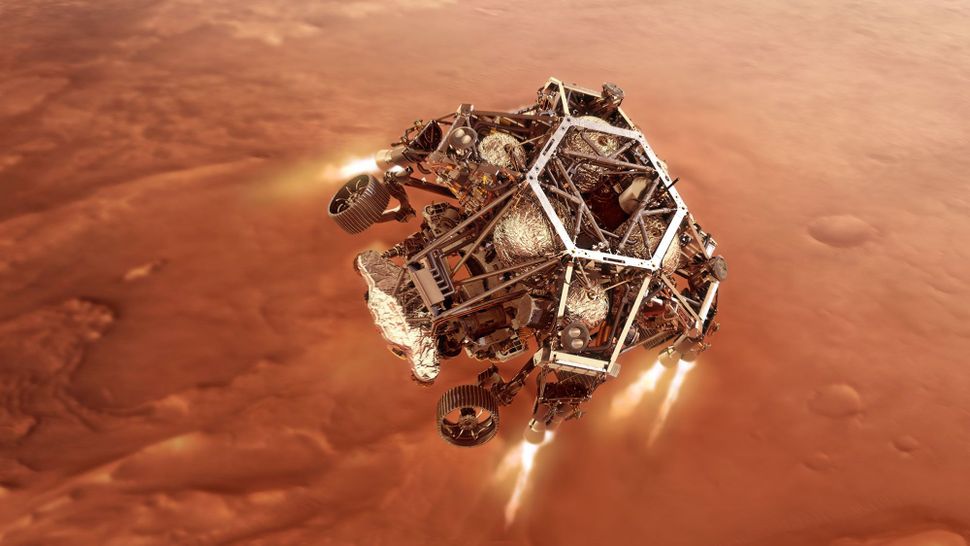 Last week’s landing of NASA’s Perseverance rover on the Martian surface reminds us of how life on Mars has long been an object of fascination here on Earth, from ancient times through David Bowie up until today. The Perseverance mission is just the latest to explore whether or not conditions in the Martian past or future could support human life. The SUV-sized Perseverance is not alone on Mars. There are currently 11 spacecraft visiting the red planet — more than enough for a minyan — including eight in orbit and three on the planetary surface. It’s a veritable United Nations of space junk up there, with projects sponsored by India, Russia, Europe, the UAE, China and the U.S.

While some Jewish traditionalists oppose searching for life beyond planet Earth and cannot countenance the thought of Jews settling elsewhere, Jewish curiosity about the heavens above is nothing new; it’s in the Bible. Rabbis and sages have looked skywards for thousands of years, some combining their deep understanding of Torah with the latest achievements in science and astronomy. Jews have been pondering what life — specifically Jewish life — might be like on Mars for centuries, and especially for the past half-century, since humans have escaped the Earth’s atmosphere, walked on the Moon, and lived in space stations.

Isaac Israeli ben Joseph wrote a landmark work of astronomy in Toledo (Spain, not Ohio) in the 14th century, which remained a relevant object of study for centuries, even before it was first published commercially in Berlin in 1777 and again in 1848. As U.K. Rabbi Zvi Solomons wrote, “Even star signs are mentioned in the Talmud. Our rabbis of old were astronomers and understood the heavens. That is how they set our calendar so accurately. The prayer El Adon is a Kabbalistic discussion of the planets.” Mars has even been imagined as the location of an eventual Jewish homeland. In his 2013 novel “Martian Sands,” Israeli-born Lavie Tidhar’s portrays a kibbutz-like settlement on the red planet called “New Israel.”

Since the destruction of the Temple, Judaism has been to a large extent a time-bound religion (as opposed to space-bound). But what happens to Jewish practice when a Jew finds himself in a space where time is measured differently? What would this mean for the Jewish calendar on a planet where one year is the equivalent of two Earth years? When would festivals and holidays be observed? How would one time the beginning and end of the Sabbath? And how to reconcile living on another planet with Psalm 115:16: “The Heavens belong to G-d, but the earth G-d has given to humankind”?

In 2015-16, Dr. Sheyna Gifford faced some of these issues directly when she took part in a year-long simulated space mission to Mars for NASA. Gifford, who served as medical doctor, neuroscientist, and habitat journalist for the mission — which saw six participants living in a sealed geodesic dome 36 feet in diameter — wrote a blogpost called “A Shtick by Any Other Name: Being Jewish on Mars,” in which she asked rhetorically, “When you’re in a space station that circles the Earth every 90 minutes, experiencing multiple sundowns daily, when, precisely, do you get your Jew on?”

As you might imagine, there are already plenty of people on the case. Rabbi Ben-Tzion Spitz, former chief rabbi of Uruguay, who is also an engineer, has developed a whole system for how Jews should measure time while living on Mars. There is even a book called “Do They Keep Kosher on Mars? And Other Pressing Questions of Jewish Life,” written by “Sol the Answer Man” in 1990.

A common joke refers to a scene wherein the first Earthlings to land on Mars are welcomed by a delegation from the local Chabad House. But even this is no joke. A Chabad-associated group called Tech Tribe has already put together “Jews in Space: A Multimedia Exploration of Jewish Life on Mars.”

Seth Rogovoy is a contributing editor at the Forward. As a child, he was convinced he really was a Martian. Then he realized he simply was a Jew. He can be reached at seth@rogovoy.com

The secret Jewish history of Mars