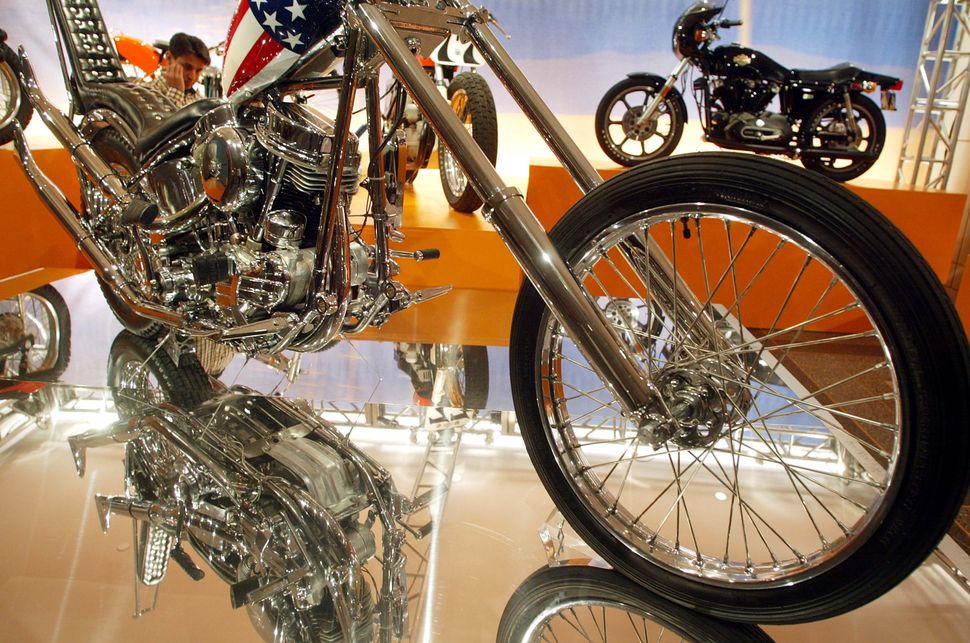 Born to Ride: The motorcycle from the film “Easy Rider” was displayed at Rockefeller Center.

Peter Fonda, who died in 2019, would have celebrated his 81st birthday today (February 23). Besides being a member of one of Hollywood’s most lauded family dynasties — his father was Henry Fonda, his older sister is Jane Fonda, and his daughter is Bridget Fonda — Peter Fonda is best remembered for his role in “Easy Rider,” the iconic 1969 film that attempted to encapsulate that decade’s counterculture. While there is nothing ostensibly Jewish about the film, and none of the principals were Jewish, there were a number of small but significant contributions made by Jewish artists, musicians, and film industry personnel to the film that is often credited with helping to launch the “New Hollywood” style of filmmaking of the 1970s.

Among its many achievements, “Easy Rider” propelled Jack Nicholson and, to a lesser extent, Dennis Hopper into the mainstream. In addition to his starring role in the film, Fonda took credit as a producer and as a co-writer of the screenplay, which was nominated for an Academy Award. Film historians credit Terry Southern with the lion’s share of the work on the screenplay, for which Dennis Hopper — who directed the film as well as acting in it — also claimed credit. 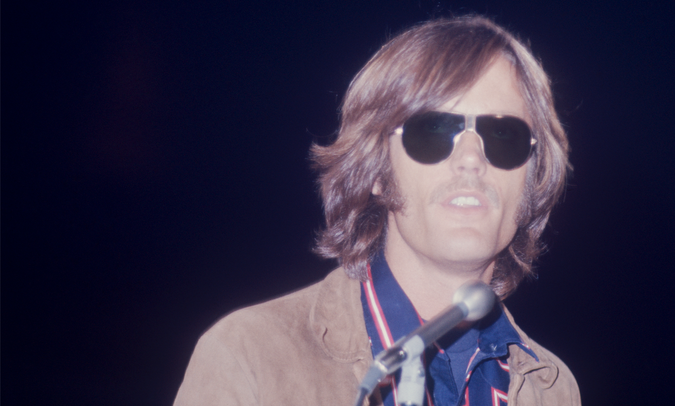 Easy Rider: Peter Fonda was one of the stars of the 1969 counterculture classic that ushered in the “New Hollywood” style of filmmaking. By Getty Images

A production company called Raybert steered “Easy Rider” to the screen. The company’s name was a portmanteau of the names of its two principals: Bob Rafelson and Bert Schneider. Both were New York City natives who had family connections in the film business: Rafelson’s cousin, Samson Raphaelson, wrote the screenplay for “The Jazz Singer.” Schneider’s father, Abraham Schneider, had succeeded Harry Cohn as the president of Columbia Pictures, which gave Raybert a leg up when it came time to find a distributor for the film. Up to this point, Rafelson and Schneider were best known for creating the made-for-TV rock group, “The Monkees,” for whom they produced a TV comedy series that borrowed heavily from the style of Beatles filmmaker Richard Lester (born Lieberman). Their work on “Easy Rider” made them serious players in the movie industry, with Rafelson going on to direct such iconic films as “Five Easy Pieces,” “The King of Marvin Gardens” and “The Postman Always Rings Twice.”

“Easy Rider” also gave a big boost to actor/director Henry Jaglom. Born in London to Russian and German refugees and, through his mother, a descendant of Jewish philosopher Moses Mendelssohn, Jaglom studied acting with Lee Strasberg at the Actors Studio in New York before heading to Hollywood in the late 1960s, when he began getting roles in TV shows and underground films. In 1967, he went to Israel to film a documentary on the Six-Day War, which never received wide release in the United States. Back in Hollywood, he fell in with Nicholson and Hopper, and wound up working as an editor on “Easy Rider.” In 1974, he worked with the very politically-minded Bert Schneider on Peter Davis’ Vietnam War documentary “Hearts and Minds,”which won an Oscar for Best Documentary. Schneider delivered a notorious acceptance speech in which he read a statement from the North Vietnamese delegation to the Paris Peace Talks, thereby infuriating Frank Sinatra, who took the stage and disavowed Schneider’s speech. Brother and sister actors Shirley MacLaine and Warren Beatty then came to Schneider’s defense, with Beatty lambasting Ol’ Blue Eyes as “you old Republican.”

New York City-born Wallace “Wally” Berman was an experimental filmmaker and artist who worked the West Coast axis between Los Angeles and San Francisco starting in the late 1940s. Among the distinctive aspects of Berman’s art were his use of Hebrew letters, an outgrowth of his study of Kabbalah. His one film was called “Aleph,” and he published his own magazine called Semina, for which he created collages that ran with the work of Beat poets including Michael McClure, Allen Ginsberg, and the very Kabbalah-influenced David Meltzer. Hopper began collecting Berman’s work and gave him a bit part in “Easy Rider,” in which he is seen sowing seeds at a desert commune—a sly reference to Berman’s publication, Semina (the word means “seed”). In an odd twist, the relatively unknown Berman wound up with his picture in millions of homes around the world when the Beatles included his visage in the group collage on the cover of their landmark album, “Sgt. Pepper’s Lonely Hearts Club Band.”

The film’s soundtrack featured the work of numerous Jewish artists. Robbie Robertson’s song “The Weight,” originally written for his group, The Band, was re-recorded by a group named Smith for the film. The Byrds performed a Carole King/Gerry Goffin hit, “Wasn’t Born to Follow,” and Roger McGuinn contributed a version of Bob Dylan’s “It’s Alright Ma (I’m Only Bleedin’).” McGuinn also performed the movie’s theme song, “Ballad of Easy Rider,” which is co-credited to McGuinn and Dylan. But that’s a story for another time.

Seth Rogovoy is a contributing editor at the Forward. He frequently mines popular culture for its hidden Jewish stories. Reach him at seth@rogovoy.com