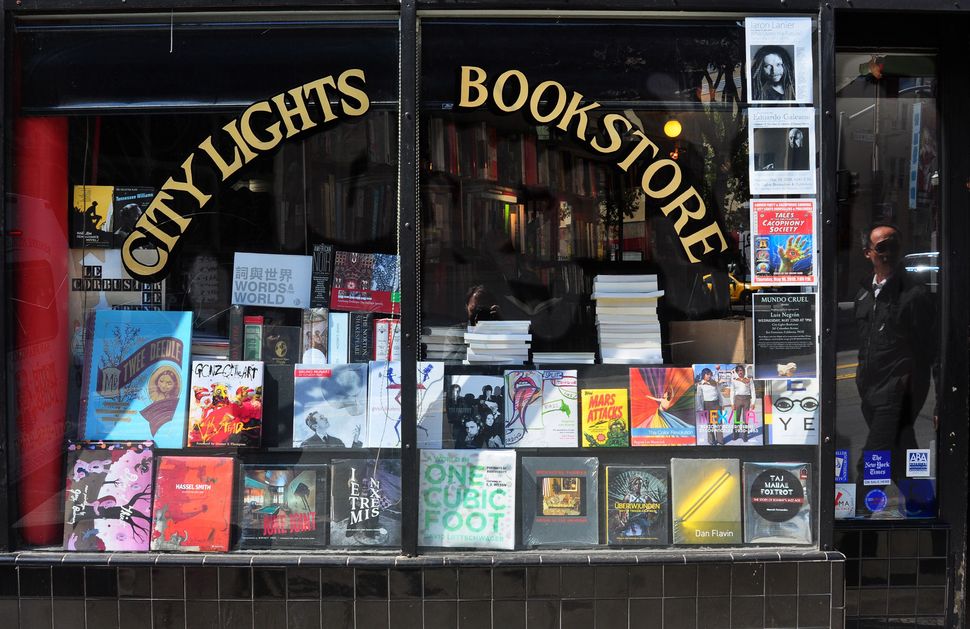 The American poet Lawrence Ferlinghetti, who died on Feb. 22 at age 101, drew on Jewish culture and history for inspiration in celebratory odes and at times of tragedy.

The Yonkers-born Ferlinghetti, whose mother, Clemence Mendes-Monsanto, was of Sephardic Jewish origin, was an avid painter in addition to his accomplishments as writer and editor.

In 1978, when Ferlinghetti’s beloved adopted city of San Francisco, where he lived for seven decades, was traumatized by the assassination of the Jewish city supervisor Harvey Milk and mayor George Moscone, he found inspiration in the biblical Book of Job.

Ferlinghetti’s poem appeared two days after the killings in the “San Francisco Examiner.” Entitled “An Elegy to Dispel Gloom,” it alluded to the mourner’s custom of sitting Shiva, as described in Job 2:11-13, “Then they sat on the ground with him for seven days.”

However, Ferlinghetti advised his readers about the public servants lost in senseless violence, that “although two sweet dudes are dead/ and no more need be said”:

“Do not sit upon the ground and talk/of the death of things beyond/these sad sad happenings./Such men as these do rise above/our worst imaginings.”

With a command of private and public occasions in poetry over a century of Mentshlekhkeyt, Ferlinghetti played a vital role in American letters. He cofounded the legendary City Lights Bookstore, that soon became a distinguished publisher.

As a storekeeper, he was decidedly sunnier than another Jewish bookstore proprietor and poet, Trieste’s gloomy Umberto Saba.

One American Jewish shopper, the writer Tosh Berman son of the experimental filmmaker Wallace Berman later recalled that City Lights taught him “that a bookstore is a sacred location.”

Throughout a long career, Ferlinghetti showed courage, taste and willingness to put up with sometimes obstreperous writers for the sake of literature. He first won widespread renown by publishing Allen Ginsberg’s “Howl” and defending the book in a court case in 1957 when it was declared obscene.

Ferlinghetti was assisted by Al Bendich, a young Jewish attorney on the defense team headed by the more established Jake Ehrlich.

Bendich noted that the trial judge was a Sunday School teacher known for sentencing shoplifters to watch the Cecil B. DeMille film “The Ten Commandments” as a form of community service.

Bendich told the judge that Allen Ginsberg, who was absent on a world poetry reading tour, might be likened to a prophet from the Hebrew Bible: “Perhaps Ginsberg is a modern Hosea – only history will show whether, like Hosea, he will be considered a great social poet and critic. But it is obvious today that Ginsberg is saying much the same thing about society as Hosea was saying about Israel.’”

The judge duly declared “Howl” to be “not obscene.” This victory would make it possible for other publishing houses, such as the Grove Press of Barney Rosset, also of Jewish origin, to print avant-garde books.

Shapiro seemed to fade away into unfashionability as a new generation of howling bards sought to make an impact like Ginsberg’s.

Ferlinghetti would pay tribute to Ginsberg’s early warnings about American materialist society, characterized in “Howl” as Moloch, the biblical idol in the Book of Leviticus to whom Canaanites sacrificed children.

Ferlinghetti rightly felt proud of his role in editing drafts of “Howl.” He had advised abbreviating the original title, “Howl for Carl Solomon,” Ginsberg’s dedication to a fellow Jewish patient at the New York State Psychiatric Institute, to attain more universal meaning for the poem.

So pleased was he with the success of Ginsberg’s work that Ferlinghetti asked the poet Jerome Rothenberg a descendant of Rabbi Meir of Rothenburg, a medieval Tosafist, to translate an anthology of New Young German Poets (1959).

Eventually Rothenberg balked, finding this plan too limiting, and replied to Ferlinghetti in April 1958 to sarcastically explain why the instructions were impossible, “unless perhaps you call the anthology NEW YOUNG GERMAN POETS WHO WRITE LIKE ALLEN GINSBERG.”

Meanwhile, to reward the lawyer Al Bendich for his legal acumen in defending Ginsberg, Ferlinghetti asked him to work on behalf of another City Lights author, the comedian Lenny Bruce (born Leonard Schneider), who in 1962 was also tried for obscenity.

Continuously identifying with the downtrodden, Ferlinghetti, who had Americanized his name to Ferling around the time of his college education in North Carolina, soon returned to the full Italianate appellation.

At his bookstore he made a point of stocking Italian anarchist newspapers, such as “Umanità Nova,” as if alluding to the ties between U.S. anarchists from Italy and Russian Jewish refugees, as described by the historian Kenyon Zimmer.

Ferlinghetti was always alert to the spectre of Fascism, and in 2012, he declined a poetry prize with a cash award attached from the Hungarian PEN Club, upon learning that it was partly sponsored by the right-wing nationalist government of Prime Minister Viktor Orbán.

Earlier that same year, Elie Wiesel had handed back an honor originally bestowed in 2004 from the Hungarian government, because Orbán’s officials were attending ceremonies to honor historical Fascist ideologues and anti-Semites.

Among many writers in the City Lights circle were Jewish allies of the Beats whom Ferlinghetti encouraged, but by no means exclusively. They included the novelist Herbert Gold, of Russian Jewish origin and still thriving at age 97.

Also the poet Ruth Weiss (1928–2020), born in Berlin to a Jewish family, who signed her books with the lower case pen name ruth weiss and embraced the Beat identity.

Jack Hirschman, a longtime San Franciscan, as well as Rochester-born David Meltzer. were others encouraged and published by Ferlinghetti.

Poets could be exasperating, as Ferlinghetti admitted to an interviewer in 2007, citing the example of the Russian Jewish author Joseph Brodsky, who gave a reading in Naples, Italy with Ferlinghetti. Brodsky “read first, got up, and walked out of the hall. I thought it was really arrogant. In this country [America,] you stick around and listen to the other readers.”

Such rudenesses apart, Ferlinghetti had a long and happy life in part because he valued poets, with many Jewish writers among them, rather than the Molochs of the political world.

Ever-prescient, one of Ferlinghetti’s more recent poetic statements was published in 2017 in The Nation under the even-then ominous title of “Trump’s Trojan Horse,” from which “all the President’s men/ Burst out to destroy democracy…”