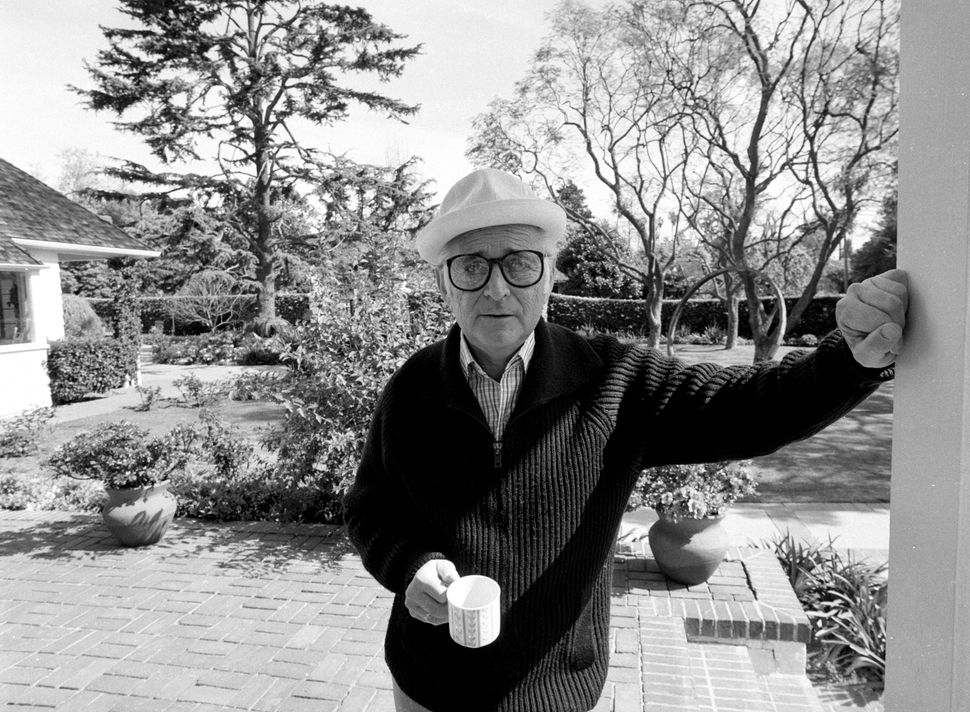 A lifetime achievement award will be presented to the American Jewish TV producer Norman Lear at this year’s Golden Globes ceremonies on Feb. 28, and it may be time to wonder whether Lear’s fierce optimism was fully deserved by the nation he has devoted himself to for almost a century.

Born in 1922, Lear was the presiding force behind such landmark sitcoms as “All in the Family,” “Sanford and Son,” “The Jeffersons,” “Good Times” and “Maude.”

The resolve that Lear showed in flying combat missions as a radio operator/gunner on B-17 Flying Fortress bombers during World War II was later expressed in broaching controversial racial and gender issues.

The tsuris was always bookended by catchy theme songs written by Jewish composers, such as for “Maude” by Alan and Marilyn Bergman and Dave Grusin; for “The Jeffersons” by Jeff Barry (born Joel Adelberg); and for “All in the Family” by Charles Strouse.

These reassuring anthems were founded in Lear’s conviction, repeated in interviews and memoirs, that few Americans hold hateful beliefs, like the fans of antisemitic radio broadcasts of Father Charles Coughlin. Lear heard Coughlin’s diatribes as a boy in the early 1930s, making him into a lifelong activist.

Lear has always believed that in America, the bad guys are an inconsequential minority. This led him to advocate free speech, agreeing with the American Civil Liberties Union defense in 1978 of a neo-Nazi group’s right to march through the Chicago suburb of Skokie, where many Holocaust survivors lived.

Clearly, in some ways U.S. society has not improved since Lear’s heyday. Several authors have noted similarities between two verbose racists from Queens, Archie Bunker from “All in the Family” and another who until recently held the presidency.

In June 2017, the political scientist Shlomo Avineri wrote an editorial headlined “Archie Bunker in the White House,” pointing out that Bunker was “not really antisemitic but not exactly a Jew-lover either.”

Avineri warned that “putting the world’s management in the hands of Archie Bunker is a dangerous business.”

For his part, Lear cheerily informed interviewers that Bunker would never have actually voted for the 45th president. Lear felt affection for Bunker, who was reportedly based on his father Hyman Lear, a traveling salesman prone to making racist comments.

Any worries about giving a TV comedy bigot a long-running nationwide platform never troubled Lear, although some writers juxtaposed the fictional racist with the real-life one as early as 1991.

In that year, Ian Shapiro, a South African-born Jewish academic, published an article in “Political Theory” asserting: “Donald Trump is able to develop more far-reaching ambitions than, say, Archie Bunker due at least partly to luck in the genetic pool and the circumstances of his upbringing.”

Two decades after Shapiro’s observation, the ex-president’s former lawyer Michael Cohen referred in a memoir to the “increasingly reactionary and unhinged Archie Bunker racism that defined Trump and his views on modern America.”

Michael D’Antonio, another writer, alluded to the “grievances of the kind of white men represented by the TV character Archie Bunker, who, like Trump, came from Queens and offered his opinions with chin-jutting pride.”

And TV historian Jim Cullen flatly disagreed with Lear’s presupposition, asking rhetorically, “Can anyone doubt that Archie would have voted for his fellow Queens native Donald Trump in 2016?”

When “All in the Family” first became a hit in 1972, the Jewish journalist Arnold Hano noted concerns about presenting a “lovable bigot” to America for weekly delectation, but dismissed them as elite maunderings.

Yet such objections were stated by distinguished authorities on racism such as Benjamin R. Epstein, national director of the Anti‐Defamation League of B’nai B’rith, Civil Rights leader Whitney Young Jr., and Laura Z. Hobson, author of “Gentlemen’s Agreement” (1947), a novel about anti‐Semitism.

Like almost all of Lear’s hit series, “All in the Family” was based on a British original in which the protagonists were significantly less charming than the US versions. The UK series did not run as long as Lear’s spinoff, which won audience allegiance by winning the hearts of spectators.

As Lear confided to Hano, “I’ve never known a bigot who didn’t have something endearing.”

With similar possibly misplaced faith in humanity, Lear convinced actors such as Bea Arthur (born Bernice Frankel) to embrace characters like the brusque Maude Findlay, described by cultural critic Andi Zeisler as “loud, strident, kind of butch, and unconcerned about her hair, [Maude] was the embodiment of everything most men (and many women) feared and hated about feminism.”

Observers claimed that Maude was inspired by Lear’s then-wife, the leftist Frances Lear (born Loeb) but Lear disagreed, preferring to identify Maude as a reflection of his own beliefs and his star’s.

Arthur repeatedly noted that Lear’s addiction to controversial subjects on a weekly basis could be excessive, to the point where she told interviewers that the only issue left for “Maude” to tackle was “hemorrhoids.”

The most unpleasant of these may have been in 1977, when Lear was sued by the African-American writer Eric Monte, who claimed that his ideas for “Good Times,” “The Jeffersons” and “What’s Happening!!” had been lifted by Lear and others without giving him due credit. The lawsuit was eventually settled.

In a parallel way, conflicts arose in the series “Good Times” when the lead actors, John Amos and Esther Rolle, became disenchanted with the way the show portrayed Black American families. Their objections were overruled by Lear and the show’s all-white writing staff.

In a recent autobiography, Lear dismissed what he called these actors’ “hypersensitivity to how they were perceived.”

John Amos, considered a “disruptive element,” later worked with Lear on other projects. But Amos recalled how Lear phoned him one day to inform him that his character on “Good Times” would be killed off: “John, I’ll share two things with you: The good news is the show has been picked up for another 24 more episodes. The bad news is that you won’t be with us.”

With such conflicts emerging from attempts at veracity, it is perhaps understandable that Lear’s most untroubled legacy was to immortalize two African-American comedians whose only controversy was being considered too bawdy for mainstream audiences: Redd Foxx and LaWanda Page.

“Sanford and Son” necessarily presented edulcorated versions of the Foxx and Page personae. The apotheosis of these virtuosos of raunch might have been a delayed reflection of Lear’s experience with rude humor in military barracks.

Usually lacking an overt social agenda, “Sanford and Son” is Lear’s most timeless project among inevitably dated shows, despite the acclaim that greeted ABC’s 2019 revival, “Live in Front of a Studio Audience: Norman Lear’s ‘All in the Family’ and ‘The Jeffersons.’”

When the results of the 2020 presidential election were announced, Lear, ever eupeptic, declared how “joyous” he felt, rather than merely relieved or sobered by remembrance of those who had not lived to see that day.

Lear’s exuberant celebration of the American dream continues, even against all the evidence currently on view.