Did Art Buchwald come up with ‘Coming to America?’ 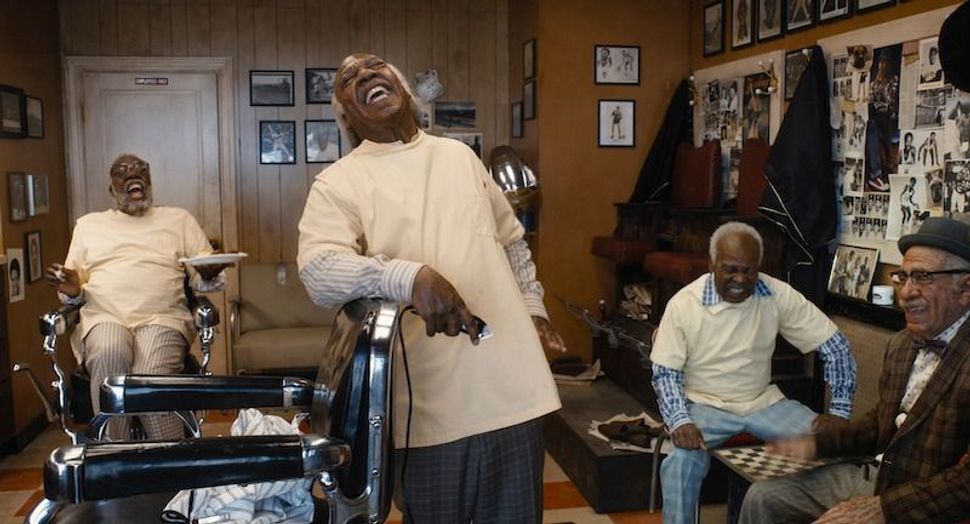 A still from “Coming 2 America.” Courtesy of Amazon Studios

The writers on the original film, David Sheffield and Barry W. Blaustein, are also returning. But it remains to be seen if their script will include a knowing nod to the iconic 1988 comedy’s other Jewish legacy: a lawsuit that pit humorist Art Buchwald against Paramount.

The story goes something like this: In 1982, Buchwald, a longtime columnist for the Washington Post, pitched Jeffrey Katzenberg a treatment that sounds awfully familiar — if markedly more problematic coming from a white writer.

In it, an “African potentate” comes to D.C. for a state visit, during which time he is deposed in his home country, is forced to make his way in the “Washington ghetto,” works as a server at a restaurant and, finally, marries an American woman and “becomes the emperor of the ghetto and lives happily ever after.”

Swap out some proper nouns and change a motivation and we have the story of Prince Akeem’s search for a future queen in Queens, New York (minus the oddly germane copyright lawsuit subplot in the completed film). Adding to the similarity — and the later suspicions of plagiarism — is the fact that Eddie Murphy was attached to star.

But then, Katzenberg moved to Disney and dropped the project and producer Alain Bernheim, who developed Buchwald’s concept with a couple of scripts, left for Warner Bros. But studio brass there abandoned the project, then called “King for a Day,” when they heard about a similar one, “Coming to America,” starring Murphy, who received a “story by” credit when the film went to theaters in 1988.

Buchwald wasn’t compensated or credited when the film came out and sued for breach of contract as his deal with Paramount said he would be paid if his scenario was ever made into a film. In 1990, the California Superior Court ruled in Buchwald’s favor. But it was the next phase of the trial — about his payout — that continues to have implications for Hollywood’s, shall we say, creative, bookkeeping.

Paramount claimed that despite the massive, $288 million box office success of “Coming to America,” the studio walked away with a loss due to money spent on marketing and development. There was no “net profit” for Buchwald to accrue, though his contract entitled him to it.

The reason, as detailed in “Fatal Subtraction: The Inside Story of Buchwald v. Paramount,” by the plaintiff’s lawyer Pierce O’Donnell and journalist Denis McDougal, was what the judge called an “unconscionable” net profit formula. While the company’s well-guarded books allowed for extravagant perks (a $235.33 McDonald’s breakfast for Murphy and a fat signing bonus for Arsenio Hall) the net profit math was studded with provisions on overhead that left little — and in this case no — share of profit on the back end for creatives.

Leery of a tort case, Paramount settled with Buchwald and Bernheim for $900,000. In its way, Paramount was acting on behalf of the entire industry by forestalling another lawsuit, given the court’s damning findings. In a twist worthy of “The Producers,” it was alleged that the formula was contrived to make it nigh impossible for a movie to show a net profit and designed to hide the existence of palpable hits. In other words, they could make more money with a hit by pretending it was a flop.

Also because of Buchwald’s challenge, studios are more careful when it comes to spec scripts, knowing they’re vulnerable to similar cases should they accidentally use a plot element from work that comes over the transom.

Still, director John Landis — who, due to his special screening of “Coming to America” for the jurors who acquitted him in his own trial (for manslaughter of a man and two children), may not be a moral authority — was dubious about Buchwald’s charges. In Giulia D’Angelo Vallan’s 2008 book “John Landis,” the director said the case against Paramount was “without merit,” adding that, “We live in a very litigious society. You can sue anybody for anything here.”

Landis insisted that Blaustein and Sheffield were the writers and never got attention in coverage in the ballyhoo around the case. Murphy has stated that the film was his idea. But whatever his opinion on the Buchwald lawsuit’s standing, Landis wasn’t entirely sour about it.

“The irony of that case is that the only people that his lawsuit benefited were Eddie Murphy and me because it forced Paramount to open their books,” Landis said.

Did Art Buchwald come up with ‘Coming to America?’